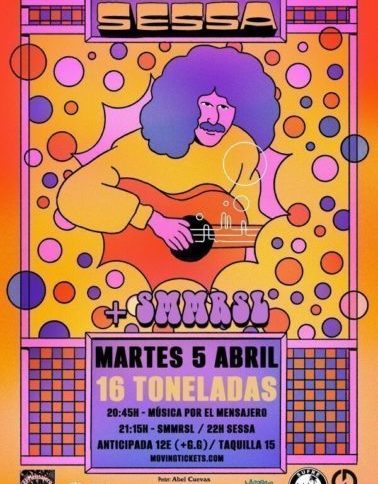 ‘Sessa’ is a solo project led by Brazilian Sérgio Sayeg.  With his South American rhythms, he recreates a colourful scenario. There are a grooves full of bossa nova, cosmic jazz, psychedelic and tropical elements that will make you feel you are in Rio de Janeiro itself!

With a hip background full of musical experience having worked in a vinyl record shop and touring musician, collaborations with New York guitarist Yonatan Gat, and as a founding member of the Paulista psych-funk combo ‘Garotas Suecas’…the musician has found his own identity.

In 2019, he decided to share his musical perspective with the world and thus ‘Sessa’ was born, the combination of carnal desire permeating his words and subtle Portuguese tones  that sometimes express visceral lyrics.

On ‘Grandeza’, his debut album, Sayeg combines Afro-Brazilian rhythms with the sound of folk guitars, female choral accompaniment and gives them a minimal treatment “uncommon in Brazilian music”. But that’s not all, as he gives it a twist with this current pop trend, and his deep use of soft melodies, a serene voice that incites you to warm up on a cold night… with sensual lyrics and spiritual invitations too.

AN EXCLUSIVE ‘24/7 VALENCIA’ INTERVIEW WITH ‘SESSA’

24/7 VALENCIA: WHAT ARE YOUR MUSICAL INFLUENCES?

CAN YOU TELL US SOMETHING ABOUT YOUR DEBUT ALBUM, ‘GRANDEZA’...

‘Grandeza’ is my first solo record that I recorded in Brazil over a couple of years, in different sessions; I was a musician touring for other bands. So, whenever I had a gap between tours, I’d gather whatever songs I had written by then and would spend one or two days in a studio to record them.

With time, I started having enough material to shape an album and at that moment I went to mix it in New York. It was made in collaboration with a choir of singers that used to be in a group called Pato Preto (Paloma Mecozzi, Lau Ra, Lia Biserra and Cecília Goés), a free jazz group from São Paulo called Música de Selvagem, percussionist Eduardo Camargo and sound engineers Jonas Morbach, Gui Jesus and Nick Graham Smith.

YOU HAVE A NEW ALBUM OUT IN THE SPRING OF 2022. PLEASE DESCRIBE THE CONCEPT OF THE ALBUM, THE SOUNDS AND ITS THEMES…

I think ‘Estrela Acesa’ is a continuation from ‘Grandeza’ but if Grandeza was about the softness of the human body and the pleasures of a lover’s touch… “Estrela Acesa” is still greatly a celebration about life but it is also has a tint of a hangover, an awareness of the limits of  relationships, a glimpse at the end of the world.

It also has meditations on what music is, how it operates in our bodies, individually or collectively. It brings forth some imaginary characters like the sentimental mermaid, a brother made of clouds…it has sonic landscapes that I wrote thinking about water, its memories, emotions and movements.

It is still a minimalist production built heavy on a classic backing band sound with plucky bass, distinctive drums and percussion, classical (nylon-string) guitar and vocals. However, i experimented heavily on strings, which come in to show how high the sky is.

I’m very grateful to the people that I work with and also the musical relationships i’m privileged to take part in. On this tour I’m travelling with Cem Misirlioglu on percussion, Laura Rosenbaum and Cecília Goés on Vocals.

Laura and Ciça have been part of the choir on ‘Grandeza’ and ‘Estrela Acesa’, and Cem is the percussionist I’ve worked the most with since Grandeza came out.

On Estrela Acesa, I co-produced and recorded the album with drummer and percussionist Biel Basile and the back tracks had the luxurious help of São Paulo music scene heavyweight, bass player Marcelo Cabral. The choir on Estrela Acesa features also Paloma Mecozzi and Marina Serva and I’ve worked closely with arrangers Alex Chumak from Minsk in Belarus and Simon Hanes in NY to come up with the orchestrations. Lastly, we have Gabriel Milliet on flutes and Seth Manchester as mixing engineer.

WHAT CAN WE EXPECT FROM YOUR SHOW IN VALENCIA?

It’s gonna be a show built largely on ‘Grandeza’ repertoire but with a generous peek of a few songs from ‘Estrela Acesa’. I feel truly blessed and honoured to be able to travel with live music again and to come and play this show in Valencia, so hope to see you there 🙂