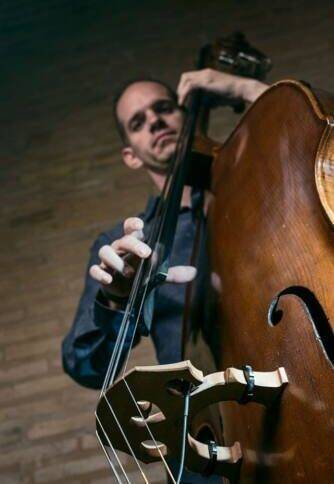 ## 24/7 VALENCIA: 1.Could you tell us something about your background and musical education?

I actually started at the age of six with the piano but from the beginning had an idea that this wasn’t the ideal instrument for me. I had asked to play drums and my parents wisely told me to start with the piano… a smart move for them I imagine! Then, around the age of nine, I went to a classical guitar lesson that my brother was taking and saw the double bass in the corner. I asked what it was and my brother’s teacher offered me one free lesson on it. From there on out I was hooked.

My first idea with the double bass was that I wanted to play jazz but I was told that in order to do that, I had to learn classical technique. So I began on that path and found that I really enjoyed classical music on bass. By the age of 11, I finally started to dabble in jazz and have kept up both as an equal interest to this day.

On the recommendation of my teacher, I auditioned for my local professional symphony, the Sioux City Symphony, and at the age of 13 won the job for section bass. Two years later, the principal job came up and I was promoted to that post after auditions. The Sioux City Symphony was an amazing opportunity for me – I began to fully understand the impact of working professionally as a musician at such an early age. At the same time, I was very fortunate to be around jazz legends such as Ryan Kisor or Mike McKenna who were themselves just finishing high school at the time in the same city. On top of that, one of the greatest jazz trumpet players of all time, Clark Terry, ran a jazz course near my home so I was able to tap into the resources there. For growing up in a rural community in the middle of the US, I was extremely fortunate to have all those opportunities within reach!

Towards the end of high school, I began taking summer courses with the renowned bass soloist Gary Karr, who was the one who really convinced me that I should pursue a career in music. If it weren’t for him, I probably wouldn’t be doing this today.

After high school, I went to study for two years at the Eastman School of Music. I was gigging five days a week in jazz as well as completing my classical studies there and that was really the crucible where I did my time in jazz, playing the clubs, playing the jam sessions and studying with some great musicians.

However, after a few years I realized that I needed an education that was a little more performance focused and as a classical musician in the US, I was being funnelled down the path of only playing orchestral music. I wanted something more open, with chamber music and jazz as much a part of my education as the traditional methods, so I transferred to the Royal Northern College of Music in Manchester, UK, and finished my bachelor’s degree there. Between the RNCM and my post-grad at the Royal Academy of Music in London, I gained experience in just about every possible musical style and I think that is what really remains one of my great influences today.

2. Describe for us a typical month as a musician at the Palau de Les Arts in Valencia…
One of the things that I love about my job at Palau de les Arts is that there is no typical month. We play operas but we also do symphonic projects, foreign and national tours and with the new Berklee Valencia School of Music, there has been quite a bit of collaboration between our musicians and the students there. Also the Palau differs from many other orchestras, which is something I was looking for. Whereas some orchestras repeat the same schedule and programming over and over again, what I was looking for was a job that was diverse both in its programming and scheduling and that would give me the occasional time to spread my wings and do some of my own projects. Without this, I wouldn’t feel as if I could work on continuing to develop as a musician.

3. What is it that makes classical music so special? Tell us about your new classical string quintet.

Classical music is a broad term that can involve anything from music from 1500 to music of today. What I enjoy about playing music that might be termed ‘classical’ is trying to make it relevant to the audience today. As a performer I don’t just want to play for myself but feel I have to engage the audience on some level and give to them what I might feel about the music and the ideas and feelings it evokes.

My new string quintet, the Elan Quintet, was formed by members of the orchestra at Palau de les Arts and started simply as a group of friends enjoying playing the Dvorak string quintet together. However, we were offered a concert with this piece and had to search for a complementary work in the same programme. We discovered a composer from the days of Beethoven, George Onslow, who had been nearly forgotten and was only just coming back into the circles of classical music. His quintets are beautiful and in their day were considered the equal of Beethoven or Mendelssohn. So we performed one of these quintets and after an overwhelming audience reception, started to embark on an exploration of the remaining 28 quintets of his as well as other music for that ensemble. The international classical record label, Naxos, saw a promotional video that Alex Baker did for us and offered us a contract for recording two quintets for them, with the possibility of completing the cycle of all of his quintets. We’ve been working to promoting the ensemble and I am looking forward to a very bright future for the group, I hope!

Another recent event in classical music for me is that I have been invited back to perform as a soloist with the Sioux City Symphony Orchestra where I began my classical career. I am performing a piece originally written for violin by Paganini but also premiering a new piece by Valencian composer Andrés Valero Castells. It really is a great honour for me and brings me around full circle to how my career began.

4. What is it that is so rewarding about jazz for you?
I’ve always enjoyed jazz, and actually I started the double bass in order to start playing jazz. I suppose it’s part of my heritage and I grew up in an environment where I was surrounded by great jazz musicians – strange considering I grew up in Iowa! However, my high school jazz band won the national first prize for big bands and from our touring and constant rehearsing it was simply ground into me from an early age.

Now, I think I see jazz as an amazing development of classical chamber music. It’s the same really – simply the music isn’t written down. You still have to listen and communicate and relay emotion and feeling. The communication is done by way of soundscapes and tonalities – the only difference is in jazz you can’t predict always where it’s going to go! That’s probably the reason I’ve drifted towards some groups that have specialized more in ‘chamber jazz’ – a genre which is starting to become quite fashionable in the jazz world today.

5. Could you explain to us about your current piano & bass duo, JPMB?
JPMB is a duo that has its roots in a meeting organized by the jazz bass teacher at the RNCM in Manchester, Steve Berry, between myself and the pianist John Pickup, who was studying in Liverpool at the time. From that first meeting in 1999 until 2006, John and I rehearsed and performed in duos, trios, quartets or whatever ensemble came up but we always maintained a connection. I think it was in Liverpool with John that I probably first started to venture into the world of chamber jazz.

Once I moved to Valencia in 2006, John and I naturally stopped for a while but, on a chance request from John for an impromptu concert in Valencia to fund a trip to see me, we played in the jazz club Jimmy Glass. The response was incredible and we were begged to record a CD. So we worked on the repertoire for a couple of years and last August went to record in La Buissonne Studios near Avignon. It was a great experience and the CD has been really well received. The music this time has specialized in jazz mixed with cinematic music. John has gone on to become a composer of some renown in cinematic and commercial compositions and so his writing for the duo really took us that direction. And the few pieces of mine that we include in the set also lend themselves that way. We have just returned from a tour in Finland and are looking forward to our next tour in Spain this November in Madrid and its environs.

6. Describe your project, the Fabio Zambelli and Matt Baker Duo…
My duo with Fabio Zambelli also had its origins quite a while back. In London, in 2004, I met Fabio while teaching double bass at a school and we played a quick duo concert for the students there. We had an instant connection and Fabio then introduced me to his fellow Italian jazz musicians living in London at that time including Fulvio Sigurta, Mauro Ban , and Giampaolo Scatozza amongst others. A duo wasn’t really the thing to do in London at the time and we started a quartet that we called Quazamba. The quartet went on until 2012, touring in the UK, Italy, Spain and Switzerland and even performing in the London Jazz Festival with guest artist Dave Samuels. However, with the crisis that hit Europe, touring a quartet based in Italy, Spain and the UK became financially impossible. The group folded but Fabio and I couldn’t really just give up so we began to explore the duo format. The public loved it so we continued experimenting and last year we decided to record it with the Valencian label Sedajazz. We just did our first tour of the album – entitled ‘Train to Laveno’ – and couldn’t have had a better response to the CD. Fabio is a wonderful colleague and friend to work with and we seem to have a common vision for the music. Also Sedajazz has been a great label to work with and I really have high expectations for this project.

7. Could you tell us more about your very latest project?
The Valencia Baryton Project was formed by colleagues from the opera of the Palau de les Arts in Valencia, Spain and the Orchestre National de Montpellier, France, with the vision of performing the nearly 160 works written by Franz Joseph Haydn in various formations with the baryton. At the heart of the ensemble is the traditional formation in trio – baryton, viola, and violoncello – for which Haydn wrote 126 works during his time as the court composer for the Prince Esterhazy of Austria.From the Americas to Europe, the Valencia Baryton Project has played to audiences around the world. The Valencia Baryton Project has just finished recording Naxos Records’ first baryton CD of their catalog and one of very few baryton recordings on a major label and look forward to its release in 2021.