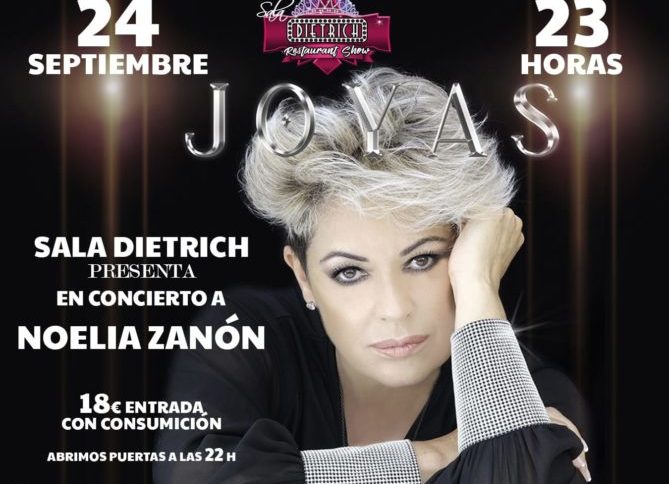 24/7 VALENCIA: Could you tell us about your childhood in Valencia and your musical education?

NOELIA ZANÓN: I was born in Valencia and grew up in the pueblo of Godelleta. When I was 8 years old, it was also discovered in my family that I had a talent for singing. After a year with my first singing teacher, I completed my first contract of 30 galas in the Valencian Community. At the age of 12, I began to record albums until the present day. I studied music theory, dance and art classes…but I realized that singing was my life and since then I have dedicated my whole life to it.

What are your musical influences?

In the very early days, it was Rocío Dúrcal, Rocío Jurado and Concha Piquer. As a teenager and up to now it would be Luis Miguel, Barbra Streisand, Lara Fabián, Lupita Dalessia, Eugenia León and more…

Why did you make Mexico your base and how does it compare with Spain?

Since I was very young, my mother always told me that Mexico was a great springboard and always supported  talented artists. I never had the opportunity to go there but, nearly 10 years ago years ago, my mother very sadly died of a liver disease. In her memory, I then had the opportunity to travel to Mexico, and it was then that I was able to see the enormous support and affection that the Mexican public showed me.  The difference for me… between Mexico and Spain…. is that in Spain you can work, but Mexico and the USA offer me the opportunity to work and also advance my career.

Tell us about your work in television…

Since I was 12 years old I have been on practically all the national channels in Spain, including a one-hour tribute on Televisión Española to Doña Concha Piquer (with Jesús Hermida). In Telecinco, I was on  Programme Mañana serán Estrellas. I was guest artist at the Benidorm Festival and guest artist on the programme ‘Trampolín’ and programme ‘El Desafío’ and more. On Antena3, I appeared on the programme ‘Tan Contentos’.

In Argentina, during 2 years in the Astral theatre I had the opportunity to appear on several national  TV channels such as América 2, Canal 9, Canal 13, and press such as the newspaper Clarín. For 4 years and ½ years I was on the air daily on the programme “la música es la pista” on Valencian Television.

As a result of my participation in the Latin campaign of the former president Barack Obama, I appeared on: CNN ATLANTA, TV3 Catalonia, AmericaTeveMiami, TV Valenciana. Also, I had my own programme as producer and host in La Vall d’Uixó Castellón, for 2 years.

What is your relationship with Barack Obama?

Being part of the need for change for the world at that time was satisfying for me and a mission too. I was asked to do  musical performances in support of the former US President’s Latino Campaign. In the USA, they chose my song ‘Quédate en mi corazón’ (changing the lyrics) to support the campaign.

Please us about your new album and the show…

I am currently promoting a double album of 23 songs, which for me are ‘JOYAS’ (title of the album itself) and I am also promoting a shared album with the famous Mexican actress Alejandra Ávalos. These albums can be downloaded from all digital platforms.

On  September 24th,  I will end my tour in Spain, with an intimate show at the ‘Sala Dietrich’ in Museros (Valencia). On  October 29th, I make my debut at the Miami Dade County Auditorium, with the maestro Meme Solís “8 voices for 4 pianos”. On November 8th, I will travel to Argentina to record one of the videoclips of one of the songs included on my album JOYAS.