You are here: Home  /  Food  /  Paella in Valencia…Rice to the Occasion
Food 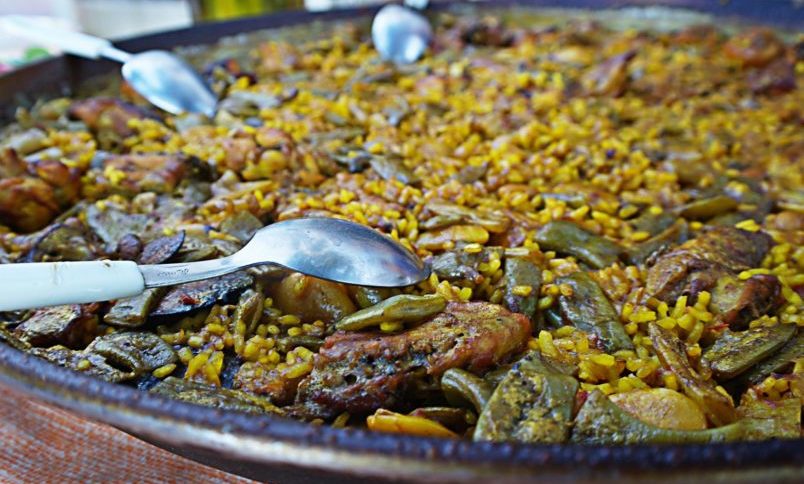 Paella in Valencia…Rice to the Occasion

##Whether it’s your birthday, your saint’s day, some friends are visiting, it’s Fallas, you’ve come into a bit of money, or it’s just a weekend family lunch; at the heart of any celebration in Valencia is the regional dish. Paella: Rabbit, chicken, rice and vegetables, fried and boiled, together in a flat pan.

Paella is not just food. It’s a byword for a get together, a bit of a party, and it’s the only thing that gets Valencians more excited than setting fire to things and the prospect of making loud bangs with a bit of gunpowder.

Just like barbecues in the UK, there’s something of the outback campfire spirit of cooking Paella that inspires the male of the species to take charge of proceedings. In many cases after not lifting a finger in the kitchen all week, it’s often the Valencian man who will proudly present the dish to the family on a Sunday, especially if it’s cooked outside.

In the case of Paella, this has its roots in history, as, in fact, it was men who invented Valencia’s pride and joy in the first place. Early nineteenth century Valencia must have been a sad and joyless place. Paella had not yet been invented and the Valencian regional dish was a soggy tasteless thing called arroz caldoso made in a large bucket-shaped metal saucepan.

At the home of Paella, the Hoya de Buñol region of Valencia, most people made their living from agriculture. The plantations were often a good distance from the villages, so the workers would spend two or three days away from home camping out in the fields. For ease of carriage, they took with them large flat frying pans or paellas, to cook their sausages in, instead of the more typical deep saucepans. Like their present day descendants, on Sundays and holidays the men “helped” out with the cooking (and just like their present day descendants they probably made a complete mess of the kitchen and didn’t even think of doing the washing up). Thinking they knew what’s best they tried to make “arroz caldoso” in the same flat pans that they used in the fields, which created a whole new dryer rice dish. Paella was born, named after the farm workers’ frying pan, a choir of angels sang and Valencia became known from then on as “Levante Feliz” or Happy Levante.

Along with Tortilla de Patata (served at all Spanish Royal events), Paella is the Spanish dish par excellence. Just like if you go to England you’ve just got to try the traditional Chicken Tikka Massala, any visit to Spain will usually include Paella. Although it’s cooked and eaten all over the country, Valencians will warn you off eating it anywhere else but in Valencia.

It may be the right colour and the right shape and even have all the right ingredients (although of course it usually doesn’t) but according to Valencians, it ain’t Paella mate. Just as you don’t see many Italians in Pizza Hut, you wouldn´t see many Valencians eating Paella in, say, Burgos (and don’t get them started on what they serve up in Covent Garden) unless, of course, they’ve just gone there in order to loudly draw attention to the fact that it’s so much better in Valencia. It’s all in the water, you see.

Valencians have been known to transport gallons of water from Valencia to other provinces when planning to prepare a Paella outside of the region because the rice just doesn’t come out quite the same cooked with water from anywhere else. A study made by a scientist at the Universitat Politécnica de Valencia has found scientific evidence to support this: “As in many chemical reactions, the concentration of diatomic metals has a determinate effect, Calcium and Magnesium, for example, in particular, are fundamental for a good Paella. Valencian water which is high in Calcium and Magnesium is clearly far superior to the soft water from other parts of Spain for the preparation of Paella”. Yeah, whatever.

Some Valencians take it to even further extremes claiming that the only good water for Paella comes from a well-known fountain in Buñol (La Fuente de la Alegría), which everyday around lunchtime attracts large queues of people both from the general public and restaurants from all over the Community, filling tanks of water in the hope of making the perfect Paella.

So, that’s the water sorted but if you want to be the next Paellero Mayor del Reino, like Vicente Vidal was, from Restaurante Levante in Benisanó (where the King of Spain goes for his Paella)… there are other rules you should follow.

According to Mr. Vidal the pan or paella should be a minimum of 30 centimetres in diameter and between 7 and 12 centimetres deep. Originally the meat was wild, mountain rabbit but, such was the appetite for Paella in late nineteenth Century Valencia, wild rabbits became extinct in a matter of a few years so they were replaced with farm produced rabbit and chicken. The rice should be rounded (code 46 in the official Spanish Ministry of Agriculture Fisheries and Food register) and of course grown in Valencia (preferably from the Tio Batista rice fields near El Palmar). It should be cooked over dry pinewood from the forest of El Garbí. The finished Paella should be left to stand for ten minutes and covered with newspaper (you should use either Las Provincias or Levante, any Madrid published newspapers might have a catastrophic effect on the overall taste of the dish). Paella should always be eaten at midday and never at night…unless, of course, it’s Fallas and it’s cooked in the middle of the street.

Once you’ve got past all the foibles and pernickety dos and don’ts of how to cook the dish, the best thing about Paella is the complete lack of any airs and graces whatsoever when you actually go to eat it.

Even in some of the most expensive restaurants (and a bit of rice and chicken can get ridiculously pricey) don’t expect candlelight, a quiet out of the way table and soothing background music. Think paper tablecloths and a huge noisy school dinner hall. Going for a Paella is not a formal occasion. There, perhaps, is where the attraction lies. Besuited businessmen will loosen their ties. Paella is often a shorts and T-shirt kind of meal. There’s probably going to be a few jars of beer involved, there’s going to be kids running round, you’re all maybe going to be eating off the same dish and it’s going to be noisy, very noisy. The classic background to Paella is the cacophonous din of fork chiming against plate and the tremendous levels of noise that a Valencian Sunday lunch conversation can create.

Over a Paella, it sometimes seems that is not what you say it’s how loud you say it. Everyone, of course, will have a comment to make on whether the texture of the rice or whatever was as good as the last time or that time in April six years ago… (Valencians are blessed with a particularly advanced “Paella memory”, the ability to remember the exact taste and texture of every Paella they have ever eaten), but of course, that’s not what it´s really about.

It is, of course, a Valencia identity thing but it’s also about letting your hair down, relaxing with family and friends and, most important of all, sharing a meal and having a bit of fun.

Tag paella in valencia rice to the occasion