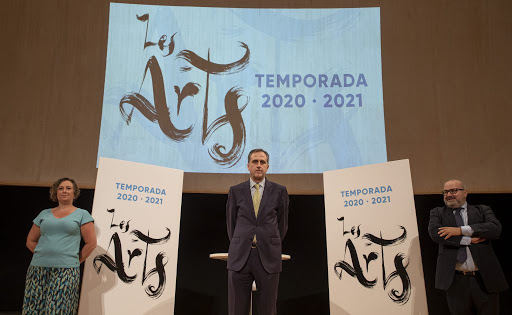 The Palau de les Arts proposes a reflection on the resilience of human beings as one of the main themes that will be addressed by the different artistic proposals of the 2020-21 season.

Les Arts has presented its fifteenth season with the presence of the regional secretary of Culture and Sport, Raquel Tamarit; the president of the Board of Trustees, Pablo Font de Mora; and its artistic director, Jesús Iglesias Noriega.

The regional secretary Raquel Tamarit highlighted the role of Les Arts “not only as a space for artistic excellence, but also as a structuring element and promoter of cultural activity, as well as a forum for debate and reflection to ensure a society that is better prepared to face new challenges.” He added that “from the educational and training programme, through activities for new audiences, to the most innovative artistic proposals, Les Arts fulfills its mission of being a cultural centre where citizens can find a space with which to identify and from Culture of the Generalitat continue to support this great project from various perspectives, one of them the economic, with a budget increase of almost 13% over last year, reaching 18.8 million euros.”

Tamarit has also recalled the special programme that has made Les Arts “to return to society live music from June after the difficult months of confinement, both with the program ‘Torna a les Arts’, as with the initiative ‘Les Arts amb tu’ and ‘Les Arts Volant’, the latter two to reaffirm the expansion of activities throughout the territory.”

Pablo Font de Mora explained that “after a season of transition, the proposals for the 2020-2021 academic year meet all the objectives set by the Board of Trustees of Les Arts for this new artistic stage, as well as committing to the situation posed by the new normality”. In this respect, he has stated that “all the activity for the public in Les Arts will scrupulously follow the health safety guidelines for both the staff and the public in attendance”.

An exercise in reflection

Jesús Iglesias Noriega has presented his second season at the head of the artistic direction of Les Arts as a framework for reflection on the capacity of the human species to overcome adversity: “A very necessary exercise in the face of the challenges facing the world after the outbreak of the coronavirus”.

An idea that, as he explained, will provide the backbone for the start of the programme: “From the overwhelming proposal of Romeo Castellucci for Mozart’s ‘Requiem’, the choreographic vision of María Pagés in ‘An Ode to Time’, the ‘Leningrad’ symphony by Shostakóvich in our first concert or the Spanish premiere of Kurtag’s ‘Fin de partie’, based on Beckett’s play of the same name”.

The artistic discourse is also based on the reference to great authors, creators and renovators and their contribution to the operatic genre: Shakespeare and Arrigo Boito for ‘Falstaff’; Charles Perrault in ‘La Cenerentola’, by Rossini; Metastasio and ‘L’isola disabitata’, by Manuel García; ‘Cavalleria rusticana’ as the summit of ‘verismo’; the Wagnerian musical drama; Samuel Beckett’s theatrical innovation or Castellucci’s revolutionary dramaturgy.

Likewise, the artistic director of Les Arts has highlighted the undeniable commitment of Les Arts to Spanish artists, “essential at this time”, in all its facets: musical direction, stage, dance, lied and casts.

The 2020-2021 season will delve into the lines sketched out in the previous year with the presence of 21st century opera (‘Fin de partie’), the repertoire of Mozart (‘Mitridade’) and Verdi (‘Falstaff’), the restitution of Central European composers (‘Tristan und Isolde’, by Wagner), as well as the claim to Spanish heritage (‘Il tutore burlato’, by Martín i Soler; L’isola disabitata’, by Manuel García; and ‘El barberillo de Lavapiés’, by Asenjo Barbieri).

The debut of renowned conductors in ‘Les Arts és Simfònic’, such as Fabio Luisi and Daniele Gatti, joins the presence of the most international Spaniards, such as Gustavo Gimeno, Pablo Heras-Casado and Juanjo Mena, and renowned specialists in the pit, such as Mikko Franck, one of the most solid Wagnerian conductors for ‘Tristan und Isolde’ and Marc Mikowski, renowned worldwide for his work with the Baroque and Classicism.

On the stage, Les Arts will present great renovators who, along with Castellucci, are directing for the first time in Valencia: Pierre Audi and his minimalist ‘Fin de Partie’, Àlex Ollé with his shocking ‘Tristan und Isolde’, Laurent Pelly and his brilliant musical theatre exercise in ‘La Cenerentola’ or the groundbreaking, fresh adaptation of ‘Falstaff’ by Mario Martone.

In the voice section, Iglesias Noriega has highlighted the list of expert performers in the different proposals. From the most coveted voices for ‘Les Arts és Lied’ such as Lise Davidsen, Ainhoa Arteta, Christian Gerhaher, René Pape, Anita Rachvelishvili and Sonia Yoncheva to the long-awaited concert by Joyce DiDonato in ‘Les Arts és Grans Veus’.

In this sense, the opera performances include singers who are specialists in each of the repertoires. Les Arts presents ‘Fin de Partie’ in Spain with the same cast as its world premiere in Milan, while the most specialist Rossini singers, such as Anna Goryachova, René Barbera and Carlos Chausson, make up the cast of the new production of ‘La Cenerentola’. Likewise, for Verdi, the reference Falstaff, Ambrogio Maestri, will sing in the Main Hall, accompanied by Violeta Urmana, who will make her debut in the role of Mrs. Quickly.

Wagner is also returning with top stars: Stephen Gould, Tristan of reference, Elena Pankratova’s debut as Isolde and the presentation in Les Arts of possibly the best bass of his generation, René Pape. While in ‘Cavalleria rusticana’ and ‘Pagliacci’, which closes ‘Les Arts és ‘Opera’, Jorge de León performs the feat of playing the demanding roles of Turiddu and Canio, accompanied by soloists like Sonia Ganassi and the emerging Misha Kiria.

Likewise, ‘Les Arts és Sarsuela’ maintains its commitment to restoring the importance of the genre with its best artistic credentials, with the presentation of the successful production of ‘El barberillo de Lavapiés’ by Alfredo Sanzol, under the musical direction of Miguel Ángel Gómez Martínez.

Dance, for its part, is consolidated as a chapter with its own entity and special attention is paid to the different disciplines by the hand of leading figures of the national scene. The flamenco of ‘Una oda al tiempo’, by María Pagés Compañía, begins a cycle that also includes the debut of La Veronal and its show ‘Sonoma’, devised by Valencian artist and choreographer Marcos Morau, with the closing in June of the Compañía Nacional de Danza with ‘Giselle’, in a proposal by its director Joaquín de Luz.

Les Arts és Flamenco’ is also growing in diversity and number of concerts to bring together the most relevant artists in flamenco song: José Mercé, the talent of the cantaor Duquende, the purity of La Macanita, the international Argentinean or the innovative flamenco of Niño de Elche. Moreover, ‘Les Arts és Altres Músiques’ continues its work to offer the most complete variety of genres, from fado with the thrilling Mariza; the essence of Berlin cabaret by Ute Lemper or ‘jazz’, with the visit of a living legend like guitarist Pat Metheny.