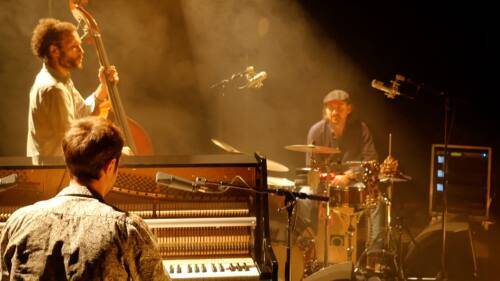 24/7 Valencia:Tell us something about your musical background and experiences…

Baptiste Bailly: I started music when I was 8 years old. I started playing drums and it’s only much later that I discovered the piano, when I was about 15 years old.  I remember going one day with my parents to see a world music concert near my house as a child. The leader of the band was Roland Rakotondrainibe also known as ‘Nono’, a saxophonist from Madagascar who lived near Lyon in those days. He had a really wild presence on stage, something very organic with a lot of positive energy.

It is when I left this concert that I asked my parents if I could have drum classes. I used to play on my father’s accordion and his drums… and I also enjoyed spending time playing on instruments with my older sister. But after this concert I understood that I had to study to really enjoy myself.

It’s only many years later that I became interested in the piano and it was again an awakening. I love it and I loved the drums but I associated the latter with school and studying a lot. I taught myself the piano as we had a keyboard at home. Again, I began to play as a child with my sister and began to compose compositions, mostly songs in French. Then, when I was 18, I started composing my first instrumental pieces influenced by the jazz-fusion music that I was listening to at that time. This included The Pat Metheny Group, Yes, Rush, Trilok Gurtu, Sixun and Weather Report.

From the age of 18, I was studying musicology and at the same time I was at the Conservatory of Jazz at Saint Etienne. Three years later, I graduated with honours for both subjects and the certainty that I wanted to live from music. I went then to Dijon to obtain a superior title of pedagogy, teaching classes at the Conservatory as a way of funding my musical projects. During the 3 years at Dijon I went twice to Spain…to Barcelona and then Valencia as an Erasmus student. I finished my studies in 2016 and since then I have never taught, I have only played.

I discovered in Spain this wild energy again that had so excited me as a child listening to Nono, and I formed some very strong musical relationships with people with whom I still play and that includes double bassist Ales Cesarini and percussionist David Gadea, of course.

How is Valencia for live music? Valencia is a city with a limited circuit with not so many musicians but some incredible artists. I arrived wanting to play jazz but I found much more than that…with really open musicians that don’t limit themselves to one genre of music. To live well from music in Valencia you have to leave the city and be involved with projects outside. There is a lack of a subsidized scene in Valencia but, as a whole, funding for music is lacking in Spain. In that sense, France is a wonderful country for funding musical projects properly. However, at the same time, the Valencian music circuit has something approaching a family in the relationship between musicians, which allows them to integrate very quickly and feasibly with little gigs, jam sessions and playing in some clubs. Unfortunately, there is a lack of a music circuit for bigger projects.

Tell us a little about each track on your latest album, ‘Pensión Almayer’.

La Ultima Luz de la Lluvia: It is the title of an impressionist painting. This painting inspired me musically as a narrative work set to music. It is a piece notable for its descriptive mood and the structure of this instrumental does indeed tell a story.

Three Lands was like writing a study of music. I was studying flamenco and transcribing Diego Amador when I wrote this piece.  The first part has something to do with a bulería but the second part returns to my way of writing, more melodic, with irregular bars supporting the changes in the melody. I always love playing the final part of this piece. It’s like a group improvisation, looking for textures and landscapes… it’s a moment of delicate, collective improvisation.

Piano Vache is a song that refers directly to the culture of the French Valse (Waltz). As a child, my father played a lot of “Musette” dance music from France and our house is full of books of old waltzes. This is a composition that respects the traditional structure and also the classic melodies of the genre. I contribute something new to the experience of playing something in this style with a Mediterranean percussionist, creating flamboyant colours along with the sound of the piano. Indeed, much of this style of music has always been played by the accordion or by the musicians of ‘Jazz Manouche’ on guitar. The title of this waltz is a reference and a tribute to the club ‘Piano Vache’ in the Latin quarter of Paris. There, every Monday Rodolphe Raffali plays a French type of jazz that is full of love. When I discovered this place I loved it… and wanted to dedicate a song to it.

Pensión Almayer is also the title of the album. It is inspired by the book ‘Océano mar’ by Alessandro Barrico. Inside this book there are seven characters in the ‘Pension Almyaer’, a fantastic place, very Orinoco. Each character is seeking a mystical experience. One wants to paint the face of the sea. He goes to the sea every day and paints with water… at the end of his life he has white paintings… this type of character left me with the inspiration for this song. The musical aspects here have a lot to do with Poulenc… one of my favorite composers… I recommend you read ‘Océano mar’ and listen to “Trois mouvements perpétuels” by Francis Poulenc.

La Calme Après la Tempête  is an old composition from my first album as a trio but not as a leader, with  Miche Martin Charrière and his son Elie on drums. The album is called MMC Trio (https://soundcloud.com/mmc-trio)… I have a lot of nice memories  listening to this version. You can compare the two. With the newer version, you can hear the personality of Ales and David. They completely change the atmosphere and feel of the track.

Laughter is from the period of my first instrumental compositions. I wrote it even before I came to Spain. Whenever I’ve had a new group, I play it because it’s great for improvising as a band. It’s a composition with a very positive energy. At the end of the version of the album there is a magnificent solo by David Gadea…

La Que Faltaba is a theme from my time in Barcelona in the Esmuc. I listened a lot of Debussy and Ravel as well as plenty of classical music in general at that time. The colours on this track come from my first autumn in Spain, with this light for the evening in the streets of the port of Barcelona that inspired me for this song.

You’ve Changed is a song from the Joni Mitchell  album ‘Both Sides Now’. The intensity of the track me flipped out when I first heard it. I wanted to make my own version of this song…

Templo del Piñon is dedicated to Ales Cesarini and his philosophy of the “Piñon” that I share and now defend. This energy that is generated by the sheer repetitive groove of the music, this state is called  Piñon that he describes as both tribal & spiritual. Here, we present Payoh Soul Rebel who sings in the final section of the song.

Minouche It’s the bonus track for the record. It’s a solo piano version of Minouche by Tony Murena. It’s a traditional waltz and a composition from the 1930s.

What is jazz for you? A very difficult question… to define what jazz is today is something that is complicated to explain. For me, jazz could be summed up as any form of musical expression that uses and values improvisation as a language. I wouldn’t define this album as a Jazz album… I know I am part of a famous jazz label called ‘Freshsound New Talent’ and that has something to do with jazz is the sense that there are many parts involved in improvisation. But it is not the main focus. I would say the focus is on the composition, the sound of the band, to respect a spirit of the “Canción” and of the PIÑON 😉

What are your musical influences? I listen to a lot of jazz, and in particular the jazz of now, followed closely by what comes out of the ECM label, for example.  Some of the artists I’ve listened to a lot and I like to listen to include Thomas Stronen, Matthias Eick, Vardan Ovespian, Aaron Parks. Keith Jarrett, Marc Copland, Bill Carrothers, Bobo Stenson. Aki Rissanen, Dan Tepfer. But also  I listen to a lot of impressionist music including Satie. Debussy, Poulenc and Ravel, some musette (André Minvielle and Tony Murena) . Since moving to Spain, I listen to flamenco and in particular to Diego Amador with his album ‘Piano Jondo’.

What are your plans with this project? We have already presented the album in Cordoba, Ibi (Alicante), Barcelona, Valencia and Italy. We will be playing in Alcoy and Alzira during the winter  of 2020. I’m already working on the next album but I won’t say anymore for the moment…

We are playing a live concert at ‘Jazztone Studios’ of Valencia on July 8th, which will be streamed on social media. Here is a link for more info: https://www.facebook.com/events/563852837857377/