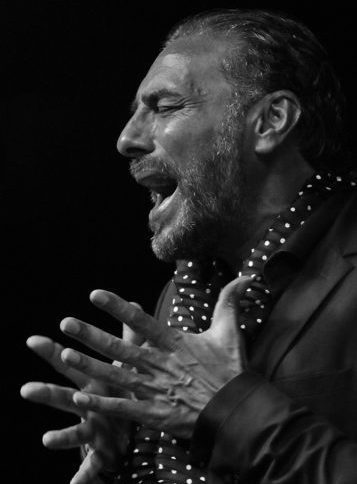 On the 10th of December Pedro Heredia Reyes, ‘El Granaíno’, one of the most awarded flamenco singers today, discovers his deepest essence in ‘Les Arts’ with the show ‘Granaíno Jondo’ at the ‘Teatre Martín i Soler’ of Palau de les Arts, Valencia. Playing with  ‘Patrocinio Hijo’, he brings the aroma of Camarón and Tomás Pavón in this recital in which he shows the path that made him become a ‘cantaor’ (flamenco singer). ‘El Granaíno’ will be opening the ‘Les Arts és Flamenco’ series of performances at the ‘Teatre Martín i Soler’, which have a single price of 30 euros.

‘El Granaíno’ will be backed by his lead guitarist  Antonio Luque Espejo from Cordoba.  This talented guitarist is known as ‘Patrocinio Hijo’  and the duo are renowned for their ability to blend together, which gives the singing and guitar playing an exceptional dimension in each of their performances.

Premiered in 2020, ‘Granaíno Jondo’ is a classical recital, with the aroma of Camarón de la Isla or Tomás Pavón, in which the performer travels the ‘camino’ that made him become a flamenco singer, the experiences he has undergone and, above all, his evolution over time.

The “jondura” and the “quejío” of his throat merge in a unique performance, in which Pedro ‘El Granaíno’ is able to reach the depths of the audience’s senses, dazzling them, song by song with his exceptional palette of colours and his innate sense of rhythm.

24/7 VALENCIA: Could you tell us more about Granada and Seville and ‘Los Farrucos’?

PEDRO ‘EL GRANAINO’: Granada is where I was born and grew up. I’m proud to be from Granada, it is where my parents and grandparents are from. When I was just a niño, I would sing to my elders. They were older relatives from another epoch and they would sing these old songs with me and we seemed to connect with each other… despite the age gap. They liked how I sang and I suppose I absorbed those influences from a different era in flamenco music. Granada is a unique place and it has magic too.

Seville is also really magical and it is also where I was formed, professionally, as a singer. Before I became a professional singer, at the late age of 30, I worked in a ‘mercadillo’ to support my family.

What happened is that I was working my trade during the day as a full-time job and sometimes singing in the evening in the usual places for flamenco in Seville. One night, I was singing and one of ‘Los Farrucos’ family spotted me and joined in on the guitar. By the end of the evening, he was impressed enough by my singing to declare: “You should be doing this professionally!”

Slowly but surely, I started to work with ‘Los Farrucos’ for music projects. So, for example, I would do a show with them that lasted for two months in Madrid (‘Al Natural’) and then go back to working on the ‘mercadillo’ for the following months. It took some persuading on their part that I dedicate myself to music full-time and it actually happened quite gradually.

I have lived here in Seville for 30 years now and all four of my children were born here. So, I definitely identify with it. Indeed, I have had the privilege to play all over the world and Granada and Seville are still my favourite cities. In Seville, playing live in ferias, I have experienced “los momentos”… that are those special moments that you never forget from a performance and that you always cherish and learn something from…

Can you tell us about your experiences of working with Tomatito?
When I was a kid in Granada, Camarón de La Isla & Tomatito would come down to play shows in the pueblos. I remember them playing live really well, even though i was just eleven years old at the time. So, Tomatito was an idol for us gypsy youngsters from an early age. Many years later, in 2012, Tomatito invited me to play in a homage to ‘Camarón’and that is when I finally got to know him in person. He’s a good soul and a superb guitarist too. He connected very well with Camarón de La Isla on a musical level, which says a lot.

Tell us about recording in the studio with guitarist Vicente Amigo…
The project was a homage to Paco de Lucia. Vicente Amigo is a genius. I don’t just mean his technical ability and mastery of the guitar. He has the ability to go straight to the heart with just 3 notes. In my opinion, he is the best guitarist in flamenco that is still alive.

What is your connection with the singer Enrique Morente?
He is from Granada too. I saw him play with Camarón de la Isla there, back in 1984. His way of interpreting a song, the personality he puts into it and the way he delivers each palo…Morente has been a huge influence on me.

In 2009, ‘Vicente Amigo’ recorded an album called ‘Paseo de Gracia’. I sang on some of it and Vicente then later took the recordings down to Enrique Morente’s studio in his home in Alabaicín (Granada) to continue recording the album. Vicente tells me that, upon Morente hearing a track with my voice on it, he said to Amigo: “Who is that singing? He’s special.” Enrique Morente added his voice and Alejandro Sanz too. I am honoured that my flamenco idol Morente really liked my voice and was impressed enough to sing & record on the same album. It’s like passing the baton on and I intend to continue honouring that…

Did you get to know Paco de Lucia?
Yes, I was fortunate enough to get to know Paco and it was a pleasure. I first got to know him during the filming of Carlos Saura’s film ‘Flamenco, Flamenco.’ I ended up hanging out with Paco and getting involved in a good few flamenco jam sessions in his home in Mallorca…that have stayed in my memory . I would sing while he played the guitar. He was a genius and yet so normal & approachable as a human being. Sometimes, the greater the gift…the more humble the artist. It was a lovely experience.

Can you tell us what Camarón de La Isla means to you?
He was a genius that goes beyond the category of flamenco. I would say that he is the greatest artist that Spain has produced in music. In terms of the elite in their own musical categories, I would put him up there with Paco de Lucia, Frank Zappa, Michael Jackson and Jimi Hendrix. Camarón was touched by the hand of God with the gift he had.

I can look back at my own singing and see that i have improved a fair bit from 10 years on. However, Camarón de La Isla was a genius when he was fifteen, when he was twenty-five and when he was thirty-five years old. His appeal is universal. At his shows, you would see all sorts of people from all sort of backgounds including gypsies, hippies, respectable family types, rockers and more. To the gypsies, Camarón de La Isla is like a god.

Like a lot of artists, he was put on this earth to share his art…which was magnificent… and he left this earth when it was his time to go. Curiously, Camarón de La Isla died on July 2, 1992. One of Camarón’s greatest influences was Tomás Pavón, the flamenco singer. Pavón died exactly 40 years earlier on July 2, 1952…

What is a typical day for you?
I am actually a grandafather now and my day consists of getting up at 7am to then take my youngest to school. I do “running” for an hour a day to keep fit. i also enjoy reading and i am currently reading a book about Enrique Morente and another called ‘Los Cantes de Antonio Mareina’ by Luis Soler Guevera and Ramón Soler Díaz. Later in the day, i then dedicate time to my music.

Can you tell us more about the concept of your show, ‘Granaino Jondo’
Yes, I can. One of my flamenco influences is Antonio Núñez “Chocolate” who was the brother in-law of one of the elders from the Farruquos family. ‘El Chocolate’ would sometimes put ‘ El cante jondo’ on the front cover of his albums. For younger people, they associate ‘Cante Jondo’ as something ancestral and something to be suffered rather than enjoyed. After seeing my particular show younger generations tells me they have enjoyed it, which is the aim…

My attitude is to approach cante jondo in a way that connects with the audience and to give them variety and try to avoid clichés too. When you are playing to the public, you should transmit the music within the first 10 minutes to get the attention of the audience who will then be more open to the rest of the show, which consists of palos like soleas, seguiriyas, malageuñas, tangos, jondos, bulerias and more…

Interview by Will McCarthy
Copyright 24/7 Valencia