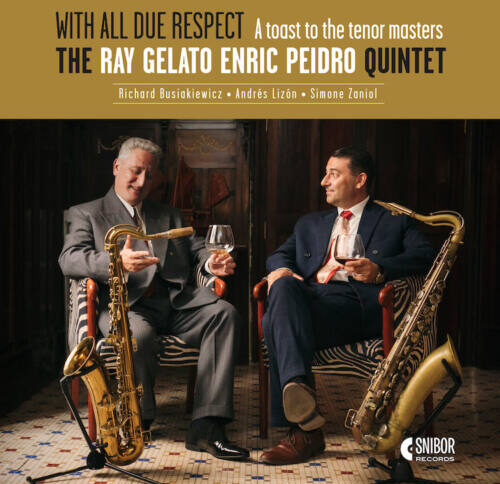 WHEN RAY GELATO (THE GODFATHER OF SWING) PLAYED VALENCIA!

RAY GELATO WITH ENRIC PEIDRO
Cafe Mercedes Jazz:“Throughout the album, Gelato and Peidro musically bring out the best in these compositions that, without exception, come from the pen of some of the brightest saxophonists and “Swingantes” that Jazz has known. This includes Gene Ammons, Coleman Hawkins, Ben Webster, Flip Phillips, “Lockjaw” Davis, Charlie Ventura, Jacquet Illinois, Don Byas and many others.

In short, this new album is an exquisite work by two key names in today’s classic tenor saxophone world, accompanied by an impeccable sound that recalls the recordings of the best Rudy Van Gelder and that will excite many Jazz fans… most likely wanting a second installment of this exciting quintet that combines elegance, knowledge and above all a passion for music and its universal language. The sound of the classic tenor saxophone enjoys an excellent reputation thanks to performers like Ray and Enric and will never go out of style!”

Ray Gelato has also had film roles in ‘Scandal’ and ‘Enigma’

“Not for nothing is Gelato known as The Godfather of Swing, a sheer delight” – Daily Telegraph

Can you tell us about your background and growing up in London in the sixties & seventies…Well, that will take much longer than I have here. Let’s say I had a very diverse childhood and teenage years mixing with many different kinds of people. I enjoyed it and London during the late 70s and early 80s had many vibrant music venues which, sadly, are no more. It was a great training ground when I started to play, as there were many bands of all different styles to listen and learn from.

What is jazz for you? Jazz to me is basically one’s own very personal sound and experience. A sense of swing, an ability to think on your feet in order to improvise.

Any lasting memories of having played at Paul McCartney’s wedding?  This was just another job. Having said that, Mr McCartney is a very nice guy and I have great respect for him. However, my career is not defined by playing a celebrity wedding.

What was your experience of being in the films ‘Scandal’ and Enigma’ like? They were really fun. Scandal was the best because we were surrounded by very beautiful girls from 6am until 9pm! I enjoy doing movies and I wish people would ask me to do more.

Describe a typical week for you…If I’m working, it’s all a big rush trying to get to the gig and there are so many things I have to organise. I also have started a podcast series called ‘ Gelato’s Parlour ‘. This is fun to do, If I have some free time. I like to practise my sax and my vocals and listen to music. My main relaxation comes from cooking and smoking a good cigar. I also love to walk around London as there is always something new to see.

You have travelled a lot.  What have you most learnt from it? Mainly that there are more similarities between people than differences.

Is Ronnie Scott’s one of the greatest jazz clubs in the world? Yes , I believe it is from what I have seen. However, it’s difficult because I have not yet been to the Blue Note in Tokyo.

Can Soho survive all the changes? I really hope so but the change seems so rapid. It’s becoming more for the tourist with small cafes and restaurants closing to make way for chains. Also, there is constant construction going on. Mainly, to build apartments for rich people. Soho has really lost most of the old character but there are still pockets of that left.

Could you tell us some more about your new album ‘With All Due Respect’ with Valencian saxophonist Enric Peidro? Really, it was Enric who encouraged me to play some more jazz and finally record a pure jazz album featuring our saxophone playing. You see, all my other albums have been vocal based and the sax has been more as a backdrop. Also most of my previous recordings have been in the Swing / Jump style.

This new one is very different in as such that it’s the first pure jazz recording that I’ve done. There are no vocals. Most of the tunes that Enric and I chose were compositions written by pre- John Coltrane , swing based saxophone players. Kind of forgotten heroes really. I’m talking about incredible players like Coleman Hawkins, Illinois Jacquet, Lester you and so on.

I thank Enric , who incidentally is a fine sax player himself, for giving me the confidence and opportunity to record this kind of album. I’m very proud of it.

Water Jug: Our tribute the the great Gene Ammons and Sonny stitt .

Lockjaw: A composition by one of the most individual sax players of all time .Eddie Lockjaw Davis

Hot Saxes: Sam the man Taylor and King Curtis wrote this . These guys were more known as fine R&B players .

Illinois Goes to Chicago: An original song by our favourite sax man. The great Illinois Jacquet.

Slammin’ around: This is taken at a fast pace and was originally recorded by swing to bop tenor sax player Don Byas . He was one of the best .

Medley smoke gets in your eyes –easy living: Enric and I show off our ballad chops on these two classic songs.

Woke up clipped: The original version featured the king of the ballads . Ben Webster. This is a beautiful tune in the minor key .

A Sound investment: Based on the standard, ‘Sweet Georgia Brown’ this is an original tune by Flip Phillips.

Bean and the Boys: The father of the tenor sax was Coleman Hawkins. This complex melody was composed by Coleman and we pay tribute to ‘ our musical father ‘ on this Bop influenced composition.

Thank you for your time!

More information about the musicians: