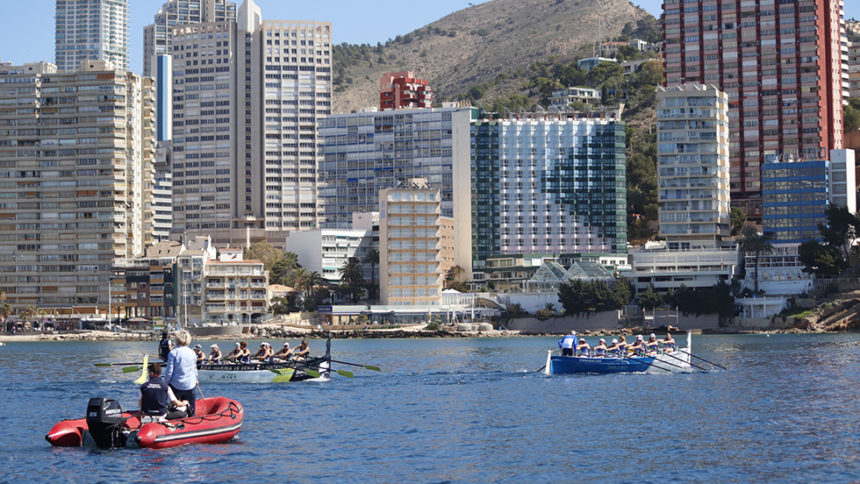 ##The bay of Benidorm was the scene last Saturday of the I Regatta League SUMA Fixed Bank Medirerráneo, a competition that between March and May will travel the Valencian coast with the participation of clubs from different parts of the Community.

This event was held in the Falucho Llaüt Valencià Medio Fondo mode, in which the athletes rowed a distance of 5,000 metres. The starting and finishing point was located next to the Club Náutico de Benidorm, organizer of the event in collaboration with the Rowing Federation of the Valencian Community, and along the route the facilities that passed through Levante Beach and reached Punta del Pinet.

The first event of the Mediterranean SUMA Fixed Bench League was attended by the junior female and veteran male and female categories. Regarding the test of young people, who were who opened the morning of rowing in Benidorm, the victory went to Real Club Nautico Gandia, who completed the course in a time of 27 minutes and 26 seconds. Thirteen seconds later came the boat of Real Club Náutico Torrevieja. Real Club Regatas de Alicante crossed the finish line in third position with a time of 28 minutes and 9 seconds.

Next came the turn for the male veterans, a race in which eight teams took part. Taking into account the finishing times and the respective age compensations, the first classified was Real Club Regatas de Alicante, with a final time of 23 minutes and 56 seconds. The fight for the first position was hotly contested, as the difference with the second, Real Club Náutico Torrevieja, was less than two seconds. Club Rem Denia, who finished third, also had a chance of taking the gold medal. Their final time was only five seconds faster than that of the Alicante club. The other finishers, in that order, were Club Náutico Benidorm, Club Náutico Alicante Costa Blanca, Club Náutico Santa Pola, Club Náutico Vila Joiosa and Club Remo Ciudad de Valencia.

In the women’s veteran race, the triumph went to Real Club Náutico Torrevieja, which completed a full podium in all three categories. Their final time, once compensation had been applied, was 26 minutes and 6 seconds. Ten seconds behind the winners was the boat of Club Rem Denia, second classified. The third position was reserved for the veterans of Club Náutico Santa Pola, with a time of 26 minutes and 45 seconds. Real Club Regatas de Alicante and Real Club Náutico Gandía finished fourth and fifth respectively. Completing the classification, in that order, were the teams from Club Náutico Altea, Club Remo Ciudad de Valencia and Club Náutico Alicante Costablanca.

The three winners therefore become the first leaders of the SUMA Mediterranean Fixed Bench League. The next meeting for the youth and veteran categories will be on Sunday 21 March in Calpe.