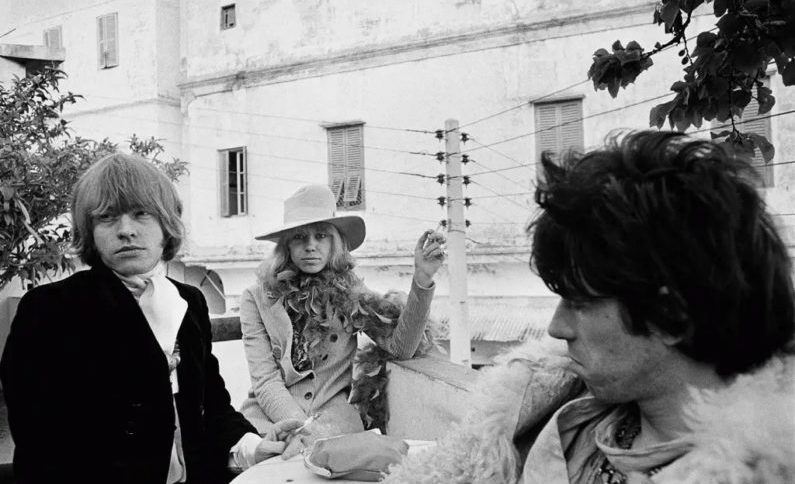 ##Rolling Stone Keith Richards has certainly led a full life when it comes to sex, drugs and rock’n’roll. It is to his credit that he has defied the critics and remembered many of his adventures, in all their colourful glory, via his  best-selling autobiography ‘Life’. Back in 1967, Mick Jagger, Keith Richards and Brian Jones of the Rolling Stones were busted by the Police for drug possession in England. With all the tension and stress and uncertainty of court cases pending and potential prison sentences, the key members of The Rolling Stones decided that a holiday break in Morocco would do them good.

Mick Jagger flew out to Tangier by plane with girlfriend Marianne Faithfull, the singer and actress. With a chauffeur at the wheel, Keith Richards, Brian Jones and actress girlfriend Anita Pallenberg opted for a drive to North Africa via France and Spain in Richards’ spacious Bentley.

Brian and Anita had been together since 1965. At this moment in time Keith and Brian were the best of friends, with Keith spending many nights on the sofa at Brian and Anita’s London flat in the months leading up to the trip…

By the time the car reached the Pyrenees, Brian fell ill and was transferred to a Toulouse hospital with pneumonia, where he was eventually sent back to London for further tests. The rest of the entourage continued the road trip through Spain. Keith Richards continues the story:

“ …with no one to watch over us, we drove on to Valencia. And between Barcelona and Valencia, Anita and I found out that we were really interested in each other…I had never put the make on a woman in my life…so Anita made the first move… We got closer and closer and then suddenly, without her old man, she had the balls to break the ice and say fuck it…Anita and I looked at each other, and the tension was so high in the backseat, the next thing I know she’s giving me a blowjob. The tension broke then. Phew. And suddenly we’re together. You don’t talk a lot when that shit hits you. Without even saying things, you have the feeling, the great sense of something being resolved.

It was February. And in Spain it was early spring. Going through England and France it was pretty chill, it was winter. We got over the Pyreness and within half an hour already it was spring and by the time we got to Valencia, it was summer. I still remember the smell of orange trees in Valencia. When you get laid with Anita Pallenberg for the first time, you remember things. We stopped in Valencia overnight and checked in as Count and Countess Zigenpuss, and that was the first time that I made love to Anita.” In another interview remembering his time in Valencia, Keith recounted:” Amazing things can happen in the back of a car…and they did.”

In an interview, Anita Pallenberg recalled:“By the time we reached Valencia, we could no longer resist each other. In the morning, i realized -as did Keith- that we were creating an unmanageable situation-so we pulled back as best we could for the rest of the journey.”

From Valencia, Keith Richards sent his mother a postcard:
“Dear Mum, Sorry i didn’t phone earlier before i left, but my telephones aren’t safe to talk on. Everything will be all right so don’t worry. It’s really great here and i’ll send you a letter when i get where i’m going. All my love. The fugitive, Keith.”

Brian Jones rejoined the band in Marrakech but was suspicious that something had happened between Keith and Anita while he was away.

“ Brian must have sensed something about Anita and me. “Yeah, we had a great trip, Brian. Everything was cool…Valencia was lovely.” The almost unbearable tension of the situation…His reaction to whatever he sensed between Anita and me was more violence. Brian was about to sign his own exit card and help Anita and me on our way. There’s no point to this non-interference anymore. We’re stuck in Marrakech, this is the woman I’m in love with, and I’ve got to relinquish her out of some formality? All of my plans of re-building my relationship with Brian are obviously going straight down the drain. I thought Anita wanted out of there, and if I could make up a plan, she would take it. Sir Galahad again. I said: ’I can’t take this shit anymore. I can’t listen to you to you getting beaten up and fighting and all this crap. This is pointless. Let’s just leave him. We’re having much more fun without him.’ Anita was in tears. She didn’t want to leave, but she realized that I was right when I said that Brian would probably try and kill her.”

A plot was hatched, and Brian Jones was sent off to record some local musicians while Keith and Anita escaped by driving to Tangier, got to Madrid and then flew back to London. It was the end of Brian’s relationship with Anita and the end of his friendship with Keith Richards. Increasingly resorting to drink and drugs, Brian Jones died in mysterious circumstances just 2 years later. Keith and Anita become a couple and had a number of children together.

A happy ending? In Keith Richards’ unofficial biography by Victor Bockris, Marianne Faithfull states that she believes that Keith Richard’s chronic drug addiction was partly to blot out guilt over his treatment of Brian Jones, who never recovered from the blow of losing the love of his life to a fellow band member and good friend. Indeed at the height of Keith’s heroin addiction in the early 1970s, Richard wrote and sung on the Rolling Stones’ album ‘Goats Head Soup’ the autobiographical song ‘Coming Down Again’, which many attribute to his betrayal of Brian Jones and his love for Anita Pallenberg and his subsequent drug addiction, a ‘misadventure’ which all started in Valencia:

Share your thoughts, there’s nothing you can hide
She was dying to survive
I was caught, oh, taken for a ride
She was showing no surprise

Regarding the accompanying photo, which appears in Richards’ autobiography Keith comments: “…the almost unbearable tension of the situation. That was recorded by Michael Cooper in one of his most revealing photographs…and a chilling image in retrospect, the last picture of Anita and Brian and me together. It has a tension about it that still radiates – Anita staring straight at the camera, me and Brian looking grimly away in different directions, a joint in Brian’s hand.”