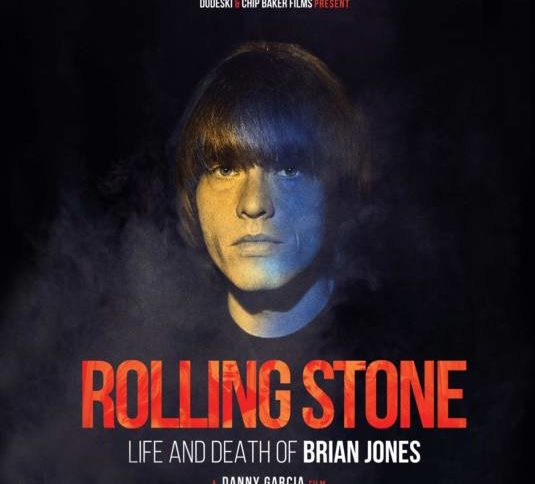 There have been a good few books on the legendary Brian Jones over the years. It’s a welcome surprise, therefore, to finally now have a quality documentary about this key figure of ‘The Rolling Stones’ and their murky past.

Director Danny Garcia is clearly a real fan of his subject. This is his most recent work regarding colourful documentaries about rock’n’roll “outsiders” like Sid & Nancy, Johnny Thunders, The Clash and more…

There are some insightful interviews with people who knew Brian back in the sixties (girlfriends, fellow musicians, photographers, music journalists, film directors) with some fresh & personal anecdotes that give a real “inside” view of Jones in the 60s. There are also hints of his growing paranoia as he slowly lost his grip on the band he had formed…

Not inaccurately, Brian Jones is portrayed here as someone who was as much about rebellion & mystery & image as the music. Undoubtedly, his lifestyle was an inspiration for the Stones music but he paid the ultimate price for his hedonism. Whether he was actually killed or drowned (in his swimming pool) is explored in detail in the documentary and its extras.

Never seen before, there’s some superb colour footage of Jones in the late 1950s on a canal ride with his girlfriend… as Cheltenham friends recall a “naughty boy who just wanted to party, party, party and make love to as many girls as possible!” …which shows that enigmatic Brian was a “Rolling Stone” a good few years before the band was formed. Indeed, even Mick and Keith were taken aback to find that Brian had fathered 3 children from 3 different mothers by the age of nineteen.

There is as much focus on the death of Brian Jones as there is his colourful life, which means that a further analysis of his musical contributions to the Stones and World Music could perhaps have made a welcome extra too. Talking about the music, there is now a ballsy soundtrack of the documentary available with plenty of Jones-like bluesy undertones in the mix. It features a wide selection of bands, including Pretty Thing Dick Taylor. It gets better with each listen…

Regarding the DVD and the extras, the found footage is well put together and the production quality overall is excellent. The interviews are often thoughtful & intimate and there are some memorable shots, including Brian’s former “local” in the Sussex Village of Hartfield and one of Brian’s daughters visiting her father’s grave in Cheltenham…determined that his legacy will never be forgotten.

‘ROLLING STONE: LIFE AND DEATH OF BRIAN JONES’ is currently showing at the on-line film festival ‘IN-EDIT’ until November 8 https://es.in-edit.org/