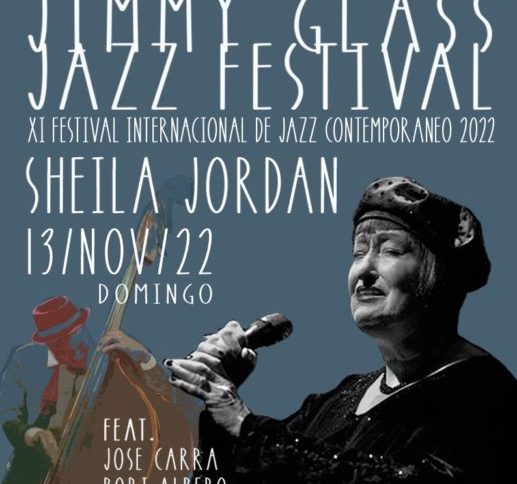 ‘Jimmy Glass’ welcomes one of the great legends of vocal jazz, the singer Sheila Jordan who, at over ninety years of age, continues to thrill audiences with her great talent and sensitivity.

In the early 1950s, she moved to New York from her native Detroit. Once in the city, she began working as a typist in an advertising agency during the day. On Monday and Tuesday nights Sheila Jordan visited a gay bar in Greenwich Village called Page Three, where she performed with pianist Herbie Nichols and bassist Steve Swallow. She met Charles Mingus and Max Roach. Mingus introduced her to Lennie Tristano, who taught her for three years and helped her improve his phrasing by listening to the solos of Charlie Parker and Lester Young.

Soon after, she moved to a loft in Manhattan on 26th Street, which became a popular place for late-night jam sessions. Life was beautiful; she regularly hung out with Charlie Parker and went to his concerts, and Bird introduced her as “the singer with a million dollar ear.” Bird also had golden ears, and appreciated her original sound and style when he heard her. Jordan’s loft became a safe haven for Parker. He used it to carry dozens of classic albums they listened to together for hours. “There was nothing romantic going on between us,” Sheila says. “I just loved him and loved his music.” She married Duke Jordan, the pianist in Parker’s orchestra, from whom she separated after the birth of their daughter Traci.

It was at this time that she witnessed Parker’s personal decline. Jordan comments: “I was with Bird the night they wouldn’t let him into the Birdland. They wouldn’t let him in because of the way he was dressed. He was wearing a dirty T-shirt. He was hurt. He turned to me and said, “Can you believe they won’t let me into the club that’s named after me?” We went to an arcade after being turned away.” Bird was on a downward spiral; he died a few months later, aged 34.

Sheila Jordan made her first records in the early 1960s, including The Outer View with George Russell, which contains a famous version of You Are My Sunshine. Later she often sang in churches, was a member of trombonist Roswell Rudd’s band, sang duets with Jeanne Lee and contributed to Carla Bley’s jazz opera Escalator over the Hill.

Sheila Jordan has  recorded 24 albums as a leader.

JIMMY GLASS
C/ Baja, 28
46003
Valencia
Spain
22 € one set / 30 € the two sets
RESERVATIONS: reservasjimmyglass@gmail.com
(Indicating the name, number of reservations, date and name of the concert and for which of the two passes reservation is requested or if it is for both passes)
https://www.facebook.com/JimmyGlassJazzBar
https://www.jimmyglassjazz.net/

Indicate which pass/session you want the reservation for: 20:30h or 22:30h or if you want it for both.

Reservation of tickets for each show (those who wish may make a double reservation to continue on the second show by communicating in advance and with a minimum discount of 50% approx. for the second show).

Only those attending the second show or both shows may dine.

The shows will not necessarily offer the same repertoire.