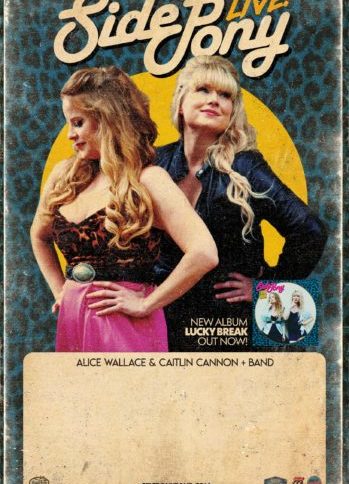 “Both prove that they are not only talented songwriters but also powerful vocalists.” Schwind, Americana Highways

“Together, they deliver the best folk and honky-tonk where solid melodies lift your shoulders with a kind of country rock that encourages you to get out on the dance floor.” – Durango Herald

From the moment they first sang together, Alice Wallace and Caitlin Cannon knew they had something special, that enchanting harmony showcased in their first single “Lucky Break,” which they released in April 2021. Their vastly different styles and personalities made them artistically stronger. Searching for the conquering chorus and the piercing phrase, they finally found their middle ground and that intangible project ended up taking a name, ‘Side Pony’.

Lancio saw that potential and that difficult balance of style and personalities, and let them discover each other singing different material, accompanied by people like Michael Webb (Poco/Hank Williams Jr/John Fogerty) on keyboards or Dan Dugmore (Linda Ronstadt/James Taylor) on pedal steel. And those “little accidents” turned into visceral melodies that grab the listener and pull them into the song.

There are pop-accented ballads; seventies grooves worthy of Waylon himself, Saturday night honky-tonk, and every possible echo of classic country and its Californian roots. While Wallace brings to the table her love for Linda Ronstadt, Emmylou Harris and Joni Mitchell, Cannon recalls her years in New York learning from Nanci Griffith or Kelly Willis, derived influences from artists like Shovels and Rope or Elizabeth Cook. They bring all of this to the stage in a dynamic and shimmering way.

Prior to ‘Side Pony’, Wallace had toured successfully presenting her melancholic material in the USA and Europe, receiving the blessings of media outlets such as Rolling Stone Country and American Songwriter. Cannon released her debut, ‘The TrashCannon Album’, in the midst of the pandemic, and still earned one of the highest scores from the influential Saving Country Music, who gave it a 9.5 and included it in their list of essential albums of 2020.