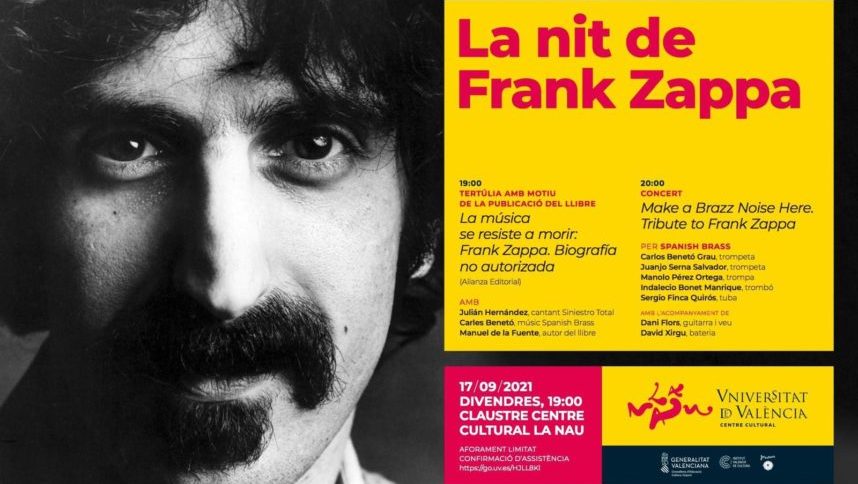 To vindicate the musician Frank Zappa and reflect on the validity of his legacy. This is the aim of ‘La nit de Frank Zappa’, an academic and musical evening organised by the Universitat de València to be held on Friday 17 September at the Centre Cultural La Nau. The session will begin at 7 p.m. with a round table with the presence of Julián Hernández, singer of Siniestro Total, Carlos Benetó, musician of Spanish Brass, and Manuel de la Fuente, professor at the University and author of the book La música se resiste a morir. Frank Zappa. Biografía no autorizada (Alianza Editorial), the first biography in Spanish about the American musician. Then, at 8 p.m., the quintet Spanish Brass (National Music Prize 2020) will revisit Zappa’s instrumental music with a concert entitled ‘Make a Brazz Noise Here’.

Frank Zappa (1940-1993) is one of the most acclaimed contemporary composers of the last century in recent years. An admirer of Edgard Varèse and Igor Stravinsky, he began his rock career with the publication of Freak Out! (1966), in which he lashed out at the American society of the time. Over the course of his career, he recorded more than 60 albums, characterised by a fusion of styles (rock, blues, jazz, doo-wop, contemporary, electronic and reggae) and by a sarcasm with which he lambasted the country’s presidents, the Beatles, the underground scene and Christian fundamentalism.

“Zappa doesn’t look for easy laughs, his humour is a vital attitude”, says Julián Hernández, who recognises the musician as a fundamental influence on Siniestro Total. “His versatility was enormous”, he adds. For his part, Carlos Benetó explains that “Spanish Brass wants to contextualise him within the classical music scene and playing his music gives us great satisfaction”. Juanjo Serna Salvador, Manolo Pérez Ortega, Indalecio Bonet Manrique and Sergio Finca Quirós complete the Valencian group, which has performed on several continents and has received various international awards, and which, for this occasion, will be accompanied by the guitar of Dani Flors and the drums of David Xirgu.

La nit de Frank Zappa’ is part of the ‘Músicas urbanas’ programme of the Vice-Rectorate for Culture and will take place on Friday 17 September at 7 p.m. at the Universitat de València’s Centre Cultural La Nau, at Calle Universidad, 2 (Valencia).

Free entrance until full capacity is reached.
Registration and information at the following link:
https://events.fundacio.es/e/775/la-nit-de-frank-zappa