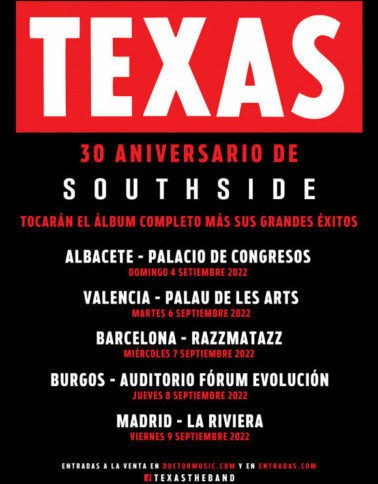 Tickets for the new dates in Barcelona and Madrid are already on sale at doctormusic.com and entradas.com. Tickets for Burgos are on sale at cajadeburgos.com, for Albacete at iboleleproducciones.com and for Valencia at emotionalevents.es. The tickets for the postponed concerts are valid for the new dates, so it is not necessary to change them. If any buyer wants to request a refund for their tickets, they can do so until April 15th through the same point of sale where they bought them. The Bilbao tickets will be automatically refunded in case of cancellation.

We have to wait a little longer, but in September we will celebrate with Texas the 30th Anniversary of their debut album, Southside. On this tour we can expect a show that will include all the songs that are part of this legendary album, as well as all their greatest hits and songs from their most recent album, Hi.