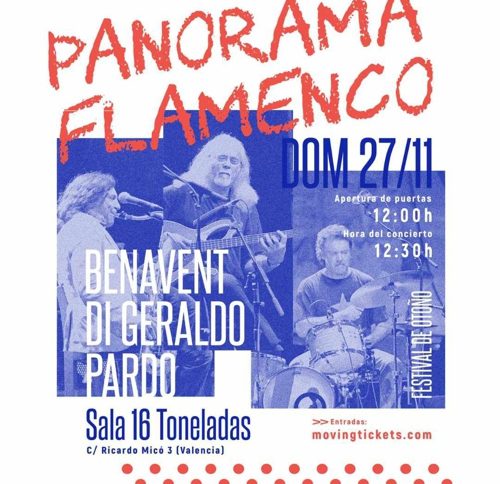 Jorge Pardo  is a truly  legendary Spanish jazz and flamenco musician, tenor and soprano saxophonist and flautist. He uses a musical language that is a cross between  jazz and flamenco and his style with the flute and saxophone is considered a benchmark of innovation. In 2013 he received the award for Best European Jazz Musician, becoming the first Spaniard to be recognised with the award from the French Jazz Academy. In 2015 he received the Premio Nacional de Músicas Actuales. He has collaborated with  some of the best musicians in the world, including Paco de Lucia and Camarón de la Isla and Chick Corea. He has a new album out in 2022, called ‘ Trance Sketches’ …connected to the new road movie documentary ‘Trance’ about his musical life. He has been playing distinctive concerts around the globe for decades.  ’24/7 Valencia’ met up with Jorge Pardo in Valencia.

24/7 VALENCIA: COULD YOU TELL US ABOUT YOUR LATEST ALBUM, ‘TRANCE SKETCHES’?

JORGE PARDO: The single ‘Tientaciones’ is already out. The album wasn’t actually planned. It came about from live-in-the-studio jam sessions with friends of mine in New York. It was recorded in Brooklyn… for the documentary ‘Trance.’ Months later, listening to the recordings, I realized there was some really good and interesting music coming from those Brooklyn jam sessions. I then ‘played’ with the  recordings by adding some ‘electronica’ to some of the tracks. I also added some ‘voces’ and also ‘guitarra flamenca’ too. It’s an interesting ‘potaje’ as I have been adding touches to the live improvisations right up until the final mix. In terms of a philosophy regarding ‘Trance Sketches’, you could say that the album has developed organically.

WHAT DO JAZZ AND FLAMENCO HAVE IN COMMON? To a certain extent, if you go back far enough you could say Jazz and Flamenco feed from the breast of ‘  Madre Africa’ in terms of  ‘Polyrhythms’ and ‘Ritmos ternarios.’ Afro-American music like ‘Jazz’ and ‘Rhythm and Blues’ and ‘Funk’ all have African influences, naturally, in terms of the beat and so on. Also, the rhythms of ‘Flamenco’… bulerias, soleas, tanguillos…are clearly influenced by Africa.

TELL US ABOUT YOUR MEMORABLE  CONCERT  AS A ‘TRIO’ IN VALENCIA WITH PACO SOTO (GUITAR) AND SERGIO MARTÍNEZ (PERCUSSION) They are musicians I have crossed paths with on a number of occasions and we all share a love of flamenco. We have a vision of flamenco that is different and distinctive… given that we have also been influenced by other types of music, along the way. We love to improvise on stage but we also respect the ‘palos’ of flamenco. We cover some of the greats like Enrique Morente and Camarón de la Isla and we also put some jazz in there too.

WHAT WAS IT LIKE WORKING WITH CHICK COREA OVER THE YEARS? It was a blessing. Chick Corea had music seeping out of the pores of his skin. Also he had a lot of humanity and a love for people involved with  music…no matter if they were unknown or famous…or if they came from the East or the West or the North or the South.

He didn’t discriminate and he was restless in his quest to make good music with others. He really loved flamenco and had an incredible ability to listen and adapt to that music too, which is not easy. I did a number of records with him and toured with him various times….including  for 2 years around the world too, from 2005-2007. So, I spent some very good times in his company. He was a really likeable and generous person. He knew how to share his musical ‘premios’ like the Grammy for the ‘Antidote’ album with  ‘The Spanish Heart’ musicians he worked with  on that album…including myself. Chick was a truly wonderful chap.

AS A MUSICAL INSTRUMENT, WHAT IS IT THAT THE FLUTE HAS THAT IS SO SPECIAL? Along with the drum, perhaps the flute is the oldest instrument that we know! The flute has that special sound, that timbre and ‘aire’. I think it has an organic sound that we all feel in our flesh & bones, that ‘sonido’ of the wind and the air… it captures you. However, if the flute is played badly…now that is another matter! (Laughs)

IS THE SAXOPHONE THE VOICE OF JAZZ?  Jazz comes from the heart. It can be played with any instrument. If you cultivate the right spirit with knowledge, there are no limits in jazz. The history of jazz is dotted with instrumentalists who took up their instruments and contributed to jazz in a new way… with Double-bass, Piano, Sax, Tuba, Cello…all sorts of instruments! Depending on the player, they have all been capable of giving that ‘jazzista’ touch to what they play.

However, it is true to say that the saxophone is indeed a distinctive instrument. It was invented in the 19th century, so it is more recent in terms of the history of acoustic instruments. Over the years, it has become accepted in all types of music. Without a doubt, the saxophone has become emblematic with jazz and it flies its flag high regarding that genre of music.

The specialists say that there are two saxophones, the one  outside of you and the one within you…it all depends on your capabilities, your larynx, your physiology, your physical stamina. For each individual, the saxophone is going to sound a particular way. It’s ‘muy curioso’ as perhaps the ‘individuo’ sound that a sax player makes with his instrument is more notable than with other instruments…perhaps the sax is distinctive like each individual’s voice is.

WHAT ARE YOUR MEMORIES OF THE ICONIC FLAMENCO SINGER CAMARÓN DE LA ISLA? You have to bear in mind that i was very young and Camarón de La Isla was ‘jovencito’ too, back in the 1970s. Since then, Camarón has rightly since become an icon in Spain and the world of flamenco. At the time, I remember both of us walking down the ‘Gran Vía’ of Madrid completely unrecognized! Therefore, I knew him in a very natural environment… not as a star… but as a great friend and truly great singer. Everytime he opened his mouth to sing, it was very special and he amazed people. He was a ‘cantaor’, an instrumentalist,  a ‘musico’ in his own way and self-taught too. He wasn’t a trained musician from the conservatories. He was curious regarding investigating and learning from all types of music, in his own way. His legacy is incredibe now.

You have to put it in the context that we were a generation trying to overcome the rigid influences of the dictatorship of Franco. So, we were all very keen to communicate and learn from other cultures. We admired musicians from abroad and Camarón as a restless ‘flamenco’ was part of that movement of exploration. He wanted to explore electric instruments and combine his deep-rooted  flamenco roots  and ‘arte’ with different ‘sonidos.’

WHAT DID YOU LEARN MOST FROM PLAYING MUSIC WITH PACO DE LUCIA? What I most learned from playing with Paco de Lucia is to give your all. From the first minute to the last of a concert… wherever it may be…however large or small the venue. It’s an energy ‘a tope’ where musicians owe it to themselves to give everything they have to the audience. From Paco, I learnt that you wouldn’t accept a bad note or dodgy musical phrase in a concert… but instead you would try to turn those moments  into ‘oro’ as part of your performance.  It was all about giving your all to the instrument you were playing, to the max, throughout a show.

HOW DO YOU SEE FUSION MUSIC IN 21st  CENTURY SPAIN? It’s a really good scene. There’s a lot of young people with some extremely interesting musical projects out there… but with a lot of difficulties in reaching an audience, which really saddens me. Professionally-speaking, there are some wonderful young musicians with a high level of musicianship and artistic exploration… be it from the colleges or from a do-it-yourself approach. Their music really moves me. It has to be said that from a business point of view things are really difficult these days, which is so disappointing and it pains me. That said, the current scene in Spain… from an artistic point of view… is really wonderful.