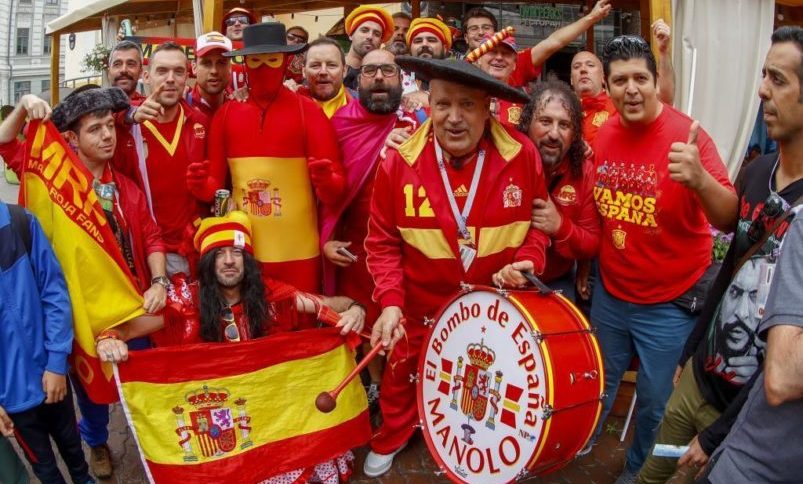 ##By Mestalla stadium, members of ‘24/7 Valencia’ team have been popping by to Manolo El Del Bombo’s legendary Bar / Museum since 1995. We interviewed him for ‘24/7 Valencia’ magazine (back in 2004) where he gave us insights about the idiosyncratic way Valencianistas support their team, his football travels around the globe and the tendency, then, for Real Madrid to sometimes be given the benefit of the doubt by the powers-that-be of that period!

Based in Valencia for more than three decades, everyone knows Manolo Cáceres as ‘Manolo El del bombo’ (Manolo of the bass drum), but this nickname could literally be about to disappear because at 72 he is going to retire, his bar was on the point of closure and he was thinking about auctioning off some of his drums because, with only “four hundred and something euros” that he earns now per month…he needs money to eat.

Manolo was born in the town of San Carlos del Valle (Ciudad Real) in 1949. At just 5 years old, he moved with his family to Huesca. Larger than life, it was here that his character that has given him his popularity was born and his powerful drumming began to sound at the end of the 1960s…

Manolo’s bar is next to Mestalla, in Valencia, a city where he settled more than 30 years ago and from where he has travelled around the world to support the national team and several clubs of Spanish football including Valencia CF.

In his bar/museum by the Mestalla you can see over 200 images, a score of drums and the footballs of the La Liga teams. Ten World Cups, seven European Cups and more than 400 matches make him the undisputed number one fan of the Spanish National Side and he has earned the recognition of many Spanish fans and even the Kings Juan Carlos I and Felipe VI.

Manolo, who has been cheering on the Spanish national team for 45 years but is now in retirement because of the virus and the economic crisis, adds: “I had invested in stock for these three months because the Fallas were coming and there were still La Liga games scheduled. I’m in the red and the bar is no longer open. In June 2020, I finished the lease because it would get worse…”

The figures don’t add up for him: “I have to pay four hundred euros and something, which is what I pay for the mortgage, plus the expenses of the flat. With my retirement coming, on just 800 euros a month, I have to eat and live…” said the best known fan of Spanish football, who wanted to thank the owner of the premises that has forgiven him the last few months of rent.

Manolo does not know how he will find the money to continue travelling with the Spanish national team because his intention is to be “in two more World Cups and to reach the number twelve I have on my shirt”. Manolo has the drums with which he supported Spain for the European titles of 2008 and 2012, and his most precious asset, the drums for the 2010 World Cup in South Africa.

Some friends have gathered together to help him financially. The call he received from former player Ricardo Arias, one of Valencia CF’s ambassadors, was also encouraging. “Arias told me he’s had a hard time too. I think Valencia will help me too,” said Manolo, who nevertheless has no regrets: “I’ve spent all my money on football and for football, but I’m very proud of everything,” recalled Manolo, who on top of all his travels recalled his odyssey to see Iker Casillas lift the 2010 World Cup title.

He remembers with nostalgia his experiences in ten World Championships and the“15,000 km i hitchhiked in the 1982 World Cup in Spain… to watch the best games. At Mexico 1986, all of us Spaniards had a great time. South Africa 2010 was even better because, although I got sick and went back to Spain… I recovered and flew back for the semi-finals in Durban and the very memorable final in Johannesburg, which Spain won …”

He adds that: “Huesca, Zaragoza and Valencia are the three teams I have in my heart.”

UPDATE! The story had a happy ending! Manolo El Del Bombo found buyers for the bar who continue to maintain its original interior as a football museum. Manolo has agreed to be present at the bar on match days at Mestalla. He also got the funding and backing to travel and is currently abroad following and supporting Spain in Eurocopa. Catch him on television in the crowd with his big drum for every match that Spain play this summer!