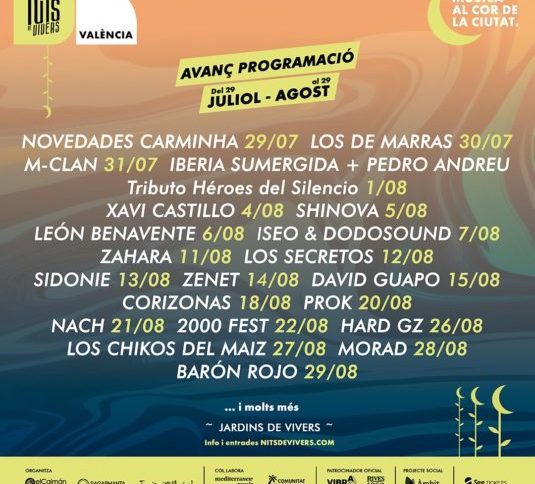 ##Nits de Vivers offers concerts by Zahara, Los Secretos, Sidonie and Zenet. The festival is at the Viveros Gardens of Valencia.

Valencian artists Jimena Amarillo and Gem will also be performing.

Tickets on sale at www.nitsdevivers.com

The Nits de Vivers festival continues to offer the public a varied cultural offer during the month of August. During the next few days, people who come to the stage of the Jardines del Real (Viveros) will enjoy the new projects of Zahara, Jimena Amarillo, Los Secretos, Sidonie, Gem and Zenet. In addition, the comedian David Guapo will perform on stage his latest show.Tickets for all the shows in the series are on sale at www.nitsdevivers.com.

In addition to completing the lineup of summer shows, Nits de Vivers has served to revive the live music sector after the ravages caused by Covid-19. Thus, more than 100 people, including artists, technicians and hired personnel from various fields (communication, services, catering, security, etc.) work each day of the festival. So far, the cycle has hosted seven musical performances with the presence of Novedades Carminha, Los de Marras, M-Clan, Iberia Sumergida, Shinova, León Benavente and Iseo & Dodosound. In addition, Xavi Castillo reinterpreted the Old and New Testament in the play ‘La Biblia’.

On the other hand, it should be noted that the performances take place in one of the most emblematic places of the city of Valencia and the enclosure has been conditioned with a large catering area and bicycle parking. Nits de Vivers is part of the brand Mediterranew Musix promoted by Turisme Comunitat Valenciana. In addition, it is sponsored by Vibra Mahou, the music platform of Mahou Cinco Estrellas, which joins the celebration with the aim of continuing its commitment to create new experiences and generate quality meetings around live music.

Pop, indie, electronic and jazz at Nits de Vivers
The stage of the Jardines de Viveros will open its doors again tomorrow, Wednesday, August 11, to welcome two women: Zahara and Jimena Amarillo. The Andalusian will perform songs from her latest album, PUTA, with which she wanted to convey “the discomfort that women have to live with”. Thus, with the aim of making songs that speak of pain and guilt, the vocalist has ended up explaining her own story. This was evident from the first single of the album, “MERICHANE”, where the artist confessed a series of macho aggressions suffered since childhood. On the other hand, Jimena Amarillo has achieved hundreds of thousands of listeners with songs like “Ni se nota”, “Cafeliko” or “Cuando ya no me quieras”. It is a proposal free of artifice, spontaneous and unprejudiced where the Valenciana expresses her feelings with lyrics full of beauty and poetry.

One day later, on Thursday, August 12, it will be the turn of Los Secretos. The legendary Madrid band will return to Valencia as part of a tour where they show the best pieces of their repertoire in an elegant acoustic sextet format. Thus, the public will be able to listen to the acoustic guitars of Álvaro Urquijo, Ramón Arroyo and Txetxu Altube, as well as the bass of Juanjo Ramos, the piano of Jesús Redondo and the cajón of Santi Fernández. The band will have a sober staging, a perfect space to capture the melancholic atmosphere of the unmistakable songs of Los Secretos.

On Friday 13, ‘Nits de Vivers’ will vibrate with one of the most important groups of the indie scene: Sidonie. It has been more than 20 years since the Catalans debuted with the EP Dragonfly and, throughout these two decades, they have left samples of their unique personality in songs in English and Spanish. On this occasion, the trio will present their most recent studio album: El regreso de Abba. In addition to sharing title, cover, story and characters with the first novel by vocalist Marc Ros, the album serves to demonstrate once again Sidonie’s mastery of catchy pop melodies. The Valencian singer Gem will be in charge of opening the stage of the Jardines del Real with songs from her second album, Satèl-lits. It is a compendium of pop-rock pieces that analyzes elements of our society: dependence on technology, social networks, the fight for equality and diversity…

Another of the essential figures of the Spanish music scene, Zenet, will land in Valencia on Saturday, August 14. The Malaga-born singer has created his own language from jazz and thanks to the fusion with other popular song styles such as fado, tango, swing, Cuban music and copla, among others. In his visit to the capital of the Turia, the singer will offer a review of his wide and best known repertoire. Most of them will be pieces that are part of his new album, ‘Zenetianos’. In this project, Zenet has recorded the most famous songs of his career in acoustic duet format with the company of artists such as El Kanka, Coque Malla, Vanesa Martín, Sílvia Pérez Cruz, Rozalén or Javier Ruibal, among others.

Finally, the comedian David Guapo will offer the show ‘Que no nos frunjan la fiesta 2’ on Sunday 15. It is a proposal where humour, music and improvisation come together in a show for all audiences. However, as the artist points out, more than a monologue it will be a dialogue since the work is based on the exchange of impressions with the spectators. It should be noted that David Guapo has made appearances in the most important comedy shows on Spanish television such as El club de la comedia, Sé lo que hicisteis, Buenafuente, El hormiguero, Nuevos cómicos de Comedy Central and Tu cara me suena.