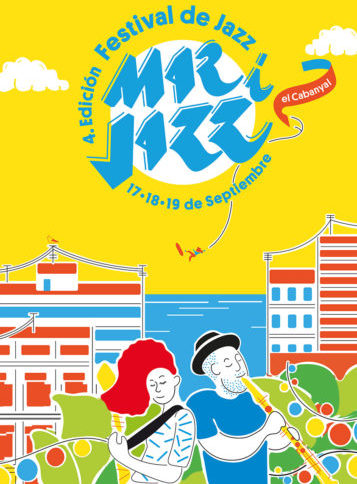 Between 17 September 2021 and 19 September 2021, the ‘Mar i Jazz’ festival will be taking place. This is the fourth edition of the festival, which is located in a park in ‘Cabanyal’ and near the sea. This is an historic barrio of Valencia.

The three day festival is a musical and gastro event, where everyone of all ages is welcome. The ‘Mar i Jazz’ festival will see Jazz music sometimes mixed with Funk, Soul, Latin, Afrobeat, Samba, Reggae, R&B and hip-hop. To celebrate the start of the Mar i Jazz festival, the programmers have arranged a day for the younger audience who like a range of eclectic sounds.

The first day of the festival on Friday September 17 will see musical acts such as The Sey Sisters, RdeRumba & Porcel and JPattersson perform.

The Sey Sisters are a band formed by three sisters who have a musical style of a blend of soul and pop. They use their music to defend human rights and transmit hope for the future. Go to this link for an exclusive report: https://247valencia.com/the-sey-sisters-at-mar-i-jazz-festival-of-cabanyal-september-2021/

Friday will then see RdeRumba and Carlos Porcel perform, they have teamed together to create a tribute to Afro-American music, that rap lovers will enjoy. JPattersson is a German artist who has a reggae sound and downtempo beats.

The Jove Big Band Sedajazz is a jazz band that consists of twenty two young people playing a variety of instruments. These instruments include the saxophone, trombone, trumpet, flute, double bass, clarinet and the flute.

Performing after Jove Big Band Sedajazz is Pilar McCarthy. She is a Valencian singer and composer. Her music fuses pop, jazz, and world music, as well as taking influence from folklore.

Sheila Weaver & The Weavers are a North American trio in the shape of Sheila and her two children, Tony, and Garon. The trio review African-American music via different musical genres including disco, funk and soul.

The final day of the Mar i Jazz festival on Sunday September 19 will see another set of new acts and performances. This includes Jazzomingo Live Jam and Mohannad Nasser featutring the legendary Jorge Pardo.

Jazzomingo Live Jam is an informal musical improvisation by those partaking. Traditionally a jazz jam session that was held every Sunday in Cabanyal in ’27 Amigos’, it was the idea of Mar i Jazz festival that arose from these sessions and the need to take the initiative to public spaces.

Alongside the music, the Mar i Jazz festival has different sections and events to visit. The festival is also a food event where you can taste tapas that best represent Cabanyal, which is a fishing district of the Levantine coast. There will also be a craft market where more than twenty-five craft stalls will be set up. These stalls will allow artists of different styles to sell their products that are 100% handmade at the festival.

To ensure that everyone is accommodated for, there will be a children’s village called ‘Kinderland’. At Kinderland, young children will be able to enjoy their weekend by partaking in the different workshops and activities that have been designed specifically for them.

Overall, the ‘Mar i Jazz’ festival is set to be a really memorable event!