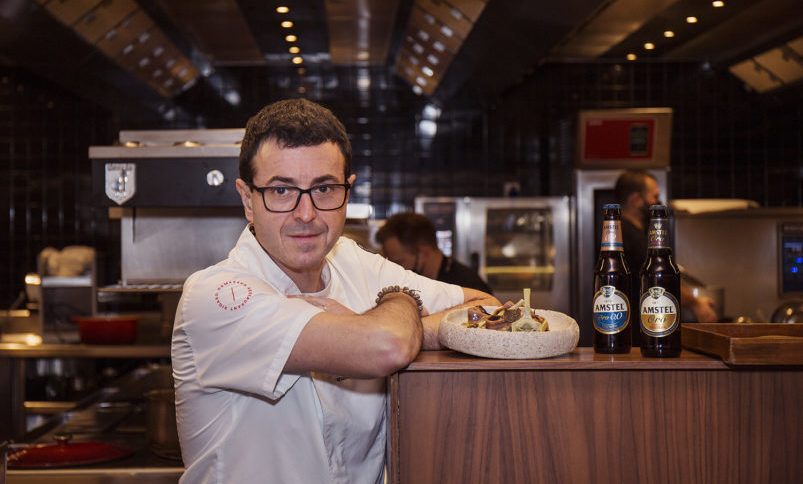 ##Legendary Valencia Chef Ricard Camarena is the winner of the national prize for gastronomy, a Double Michelin star chef and Michelin Green star chef too. This expert proposes together with Amstel a surprising combination of flavours…

Turron and Amstel Oro are part of Ricard Camarena’s recipe.

Artichokes with nougat, anchovy vinaigrette and truffle slices, paired with Amstel Oro or Amstel Oro 0.0, is the proposal of the double Michelin Star chef…

There is no better way to do this than with the Valencian, National Gastronomy Award, double Michelin Star and recently awarded the new Green Star for his commitment to sustainability and local products. A spirit that brings him closer to Amstel’s philosophy.

Camarena is characterized by looking for natural and simple ingredients, but that give the best of themselves in combinations full of creativity. “What I like best is to completely turn around the food that any of us can have in the fridge. The preparations are simple, but the secret is to find new nuances by bringing together opposing flavors,” says the chef.

This is the case with the ‘Artichokes with nougat, anchovy vinaigrette and truffle chips’ that Camarena has created at the request of Amstel, as the perfect proposal to pair with Amstel Oro, both in its original version or in its 0.0 variety, for those who prefer a non-alcoholic option for these days, without losing any of the flavour of this beer with character and toasted malts, ideal to accompany the best gastronomy.

The design of this surprising recipe is based on the association of three pairs of foods with opposing tastes: the anchovy with the truffle, on the one hand; the truffle with the artichoke, on the other; and the almond with the artichoke. “Our aim was to pay homage to a typically Valencian product, such as nougat, an icon of the festive season. So throughout the preparation I have been incorporating its ingredients, honey and almonds. But I have also incorporated some of the best nougat…” says the chef, for whom the triple toast of Amstel Oro, with more intense flavor and aroma, with a passage through the mouth that cleans the palate, are perfect for this dish. Winner of recognitions like the Prize to the Best Beer of Spain in the category Lager Pilsener in the World Beer Awards, this recipe of the Valencian master brewer Rafael Sánchez is suitable for powerful culinary proposals thanks to a more robust body. Preparations such as Camarena’s proposal for the winter season, in which bitter and sweet touches, gentle and crunchy textures, the sweetness of the artichoke and the intensity of the anchovy are contrasted.

Amstel Oro and Camarena propose a dish that serves as a starter or as a very sophisticated first course. “But, in fact, super simple to make because you only have to boil the artichokes and assemble the vinaigrette. It is a recipe that anyone can make at home, although it is very surprising in the mouth. Besides, it is uplifting and it is healthy”, argues Camarena. He himself enjoys cooking at home for his immediate family. And this year he has launched an initiative that will allow his team to brighten up the menus at many family gatherings. It consists of some boxes with a main dish with garnishes, salad and a brioche bread. They are designed for groups of 4 to 8 people, with recipes that involve much longer, complex and masterful preparations, to which Ricard contributes his personal culinary genius. An initiative that can be consulted on his website.

“We are going through a very complex time in the restaurant world, but it can also be an opportunity to innovate.” says the chef of Barx, Amstel partner, the only major brewery that produces its products in the Valencian Community for decades and maintains a close relationship to support the regional hospitality. A sector to which Camarena brings four very different proposals on the premises of Habitual, Canalla Bistro, Central Bar, Cocaloka and the gastronomic Ricard Camanera Restaurant.