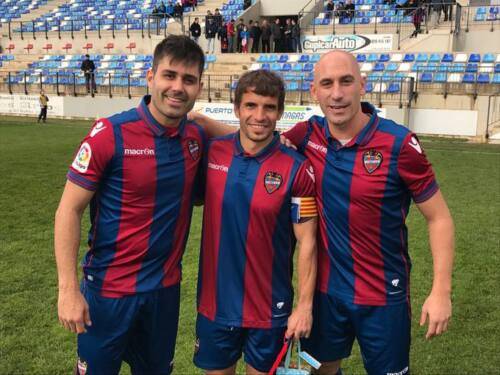 ##Luis Rubiales or “Rubi”to his teammates finally knows what it is to experience football in La Primera at 27 years old and after undergoing various ups and downs in his career. The left-back, who hails from Motril in the province of Granada, feels that the various knock-backs he has suffered have served only to enhance his appreciation of the situation in which he now finds himself.

For as long as he can remember he has played football, as a youngster he played from sun up until sun down, often being reprimanded by his mother for forgetting to come home at tea time. His grandfather broke all goal scoring records playing in the lower leagues for Algeciras and seems to have passed on the footballing gene to his grandson, Rubiales adds that his father also played football, never to professional standards but has always been there to support his son in his desire to become a professional player. “My father never shouted nor screamed from the sideline, but he was always there to give me advice and listen. Indirectly, he sees his own dream fulfilled through his son.”

At 14 years old he was playing for his town team Motril, and after a whistle stop tour of the Midlands he was offered a year long contract at Port Vale. He turned down the opportunity, being so young, and returned to Spain where he was signed up by Valencia.

After several years in the Valencian youth set up where he forged various friendships with players such as Andres Palop and also met his future wife, Rubiales went to Radomir Antic’s Atlético Madrid.

After several games in the second team, Antic called him into the first.  That very same week, after an innocuous challenge, Luis was to experience his first serious injury, an injury which threatened to cut his career short even before it had properly begun. “Doctor Guillen told me to carry on studying as he thought my career was over. A few years ago, I bumped into him and thanks to him I am still a professional footballer“.

Rubiales fails to mention that apart from the expert medical attention he received, he would spend 8 hours a day in the gym to recuperate, convinced that one day he would play again, ” I felt really bad for about 2 hours when the doctor told me that my career was over, and then I decided I was going to fight on and play again.”

His parents were on hand to support him putting on a brave face to help their son in his quest, hiding their own doubts about his possible recovery.

Through sheer willpower he returned to play for Lleida and Mallorca B, but his career, after suffering such a serious setback, came to another impasse. He was offered a trial at Xerez, and was accompanied by his father during the few days they spent in Andalusia: “My father was more nervous than me, when they offered a professional contract, my father broke down in tears”, relieved to see his son fight back from adversity once again.

In Xerez he met Mora and Jesule, fellow players in today’s Levante, the same Xerez that refused to pay its players and were on the verge of winning promotion to La Primera despite all the off-field problems, I put it to him that if these problems hadn’t existed maybe Xerez would have gone up, Rubiales said the referees also had a part to play in the fact that they didn’t win promotion, a similar situation to what is happening to Levante this year, “It would break my heart to think that referees purposefully went out of their way to punish certain teams”.

Despite the fact that Xerez owed him a large amount of money he refuses to criticize the club, citing the fact that thanks to them he is now playing in La Primera. “The day we (Levante) won promotion I sat down with Jesule (fellow player in Xerez) and we began to remember the times in Xerez when we had to have the telephone by our side every morning, awaiting the call to tell us which training ground we had to go to that day, and wondering if and when we’d get paid”.

Rubiales has an awful lot of admiration for the manager who took Levante back into the top flight, Manuel Preciado, but recognizes that Schuster has been his “mister” in Xerez and Levante for several years now and he values the German as a great manager.

When asked about Schuster’s volatile character Rubiales says that “when things are going well, out comes his Spanish side, and when things go bad out comes his German side”. He also feels that the press don’t appreciate the job that Schuster is doing, saying that many of today’s press prefer to “vender mas que informar”.

After being a fixture in last year’s promotion winning team, this season he is having very few opportunities to prove himself, simply because so far he has had four injuries coupled with the arrival of Irish international, Ian Harte.

For Luis, Harte’s arrival has been very positive, not only as a spur to him but also because he has formed a friendship with the former Leeds star: “Just because Ian plays in the same position as me, doesn’t mean that we can’t be friends”, a friendship that has seen the Spaniard introduce the Irishman to the nations culinary delights,”he’s gone mad on “una cervecita y chistorra” adds Luis, “and if he denies it, he’s a liar”, confirming the “buen rollo” that exists between the two left-backs.

Rubiales loves English football: “It’s really honest football, for me the best in the world, a true team game”. He also says that one day he would love to play in the English League.

When he’s not training or playing, he spends all the time he can with his family, he’s the father to a beautiful little one year old girl. He also finds time to catch up on the studies that his footballing career put on hold.” I’m studying law, and when I finish I would like to do something in that field, I would like to carry on doing something with regards to football, maybe coaching youngsters.” giving back a little to the game that has allowed him to live out every schoolboy’s dream.

Rubiales is remarkable for his down-to-earth attitude, and accessibility, not a common trait with today’s professionals.

He remains completely convinced that his team will stay up this season; if Luis Rubiales is half the footballer as he is a person then Levante will have no problem staying in La Primera.