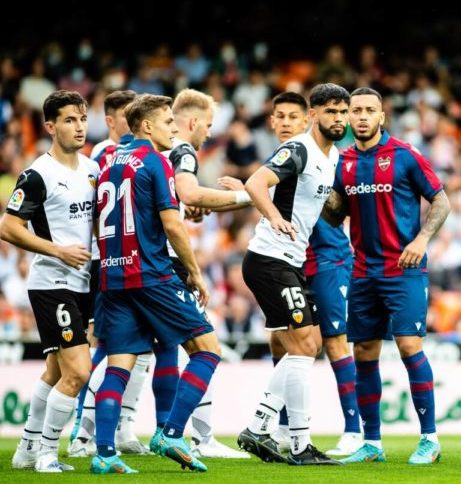 Valencia fans have another fruitless season to endure after their last chance of silverware ended in heartbreak a few weeks ago. A hard fought Copa Del Rey Final culminated with Real Betis and Valencia all square after 120 minutes of entertaining football. During the first ninety minutes both sides had excellent opportunities to win the game but it was only Borja Iglesias for Betis and Hugo Duro for Valencia who found the back of the net.The additional half hour was just edged by Betis, but they could not find the winning goal as Los Che defended staunchly. Both teams tired quickly in the second part of extra time and became resigned to taking spot kicks after midnight in the Estadio La Cartuja.

Betis won the toss for the spot kicks so had the advantage of their home fans behind the goal. Valencia was first to take the spot kicks with Soler, Račić, and Guedes, all converting easily. Yunus Musah took the fourth spot kick and, unfortunately, the young American blazed high and wide of the goal of Claudio Bravo.

Gayà converted Valencia’s ultimate spot kick but Betis were faultless in converting all their five penalties, with former Valencia stars Joaquín and Andrés Guardado amongst their successful takers.

The Valencia fans, like the team, had done the club and city proud but in all likelihood the season will be seen as a failure by the majority of fans, despite a Cup final appearance.

With the league season close to the finishing line, Valencia can hope for nothing more than a mid-table finish and no European football next season.

The magnet of the Champions League and Europa League is a very powerful pull for players. It could be the difference between getting a quality signing or not in the summer.  Even more worryingly, these situations can see star players leaving to rivals who can give them that opportunity.

Guedes has arguably been the player of the season and he will have many suitors looking to obtain his signature in the off season. The press has also been linking Carlos Soler to Barcelona with a 20 million transfer, stating a pre-agreement is already in place.

The rumour mill on Soler has been such that it led to an official communique from the club flatly denying that any deal had already been done and that contractual negotiations on ongoing to try and get the Spanish midfielder to extend his current contract at the Mestalla.

Cillessen looks set to leave and Bryan Gil, llaix Moriba, Heider Costa and Denis Cheryshev are all out of contract at the end of June.

If Valencia do only one piece of business in the summer months, it should be to do all they can to keep Bryan Gil at the club. He has been an inspiration since his loan from Tottenham and his capture could be the difference between many “abonos” renewing their season ticket or not. His exciting wing play has been one of the big positives of this campaign, and he is the kind of attacking player that Valencia fans have been used to over the years.

Hugo Duro and Omar Aldarete are also on loan deals that expire in June. However, in their cases, there is an option to buy in their contract clauses.

Both would be popular acquisitions and are already favourites with the fans. Social media suggests that Hertha Berlin has received interest from another La Liga club who are willing to meet their asking price, so that maybe a tougher deal to get over the line than Duro who clearly wants to be playing at the Mestalla next season.

One success from this season is the promotion of Valencia Mestalla from Group 6 of the “Tercera División de España”. They finished ten points clear of their nearest rivals Saguntino, and continue to provide the first team with a constant stream of players.

The latest off the production line is Jesús Santiago Pérez (known as Yellu) who made his debut in the recent league game against Villarreal, when coming on as a second half substitute in the 2-0 league defeat.

Meanwhile, in the Northern part of the city, Levante UD have it all to do if they are to maintain their La Liga status next season. In truth, their form of late has been good but they still have not made real inroads on their relegation rivals Alaves, Granada, Cádiz and Mallorca.

They did have a fantastic 4-1 victory in Andalusia over Granada, but two home defeats against Barcelona and Sevilla (by the same score of 3-2) hindered any kind of progress up the league table.

For their next home game against Real Sociedad, the club has launched a campaign to try and fill the stadium. Season ticket holders can bring two companions at a reduced price to the game. The goal is to attempt to get a capacity crowd behind the team for this must win game and keep their survival hopes alive.

Finally, Villarreal’s dream of playing in their very first Champions League Final was eventually crushed by a professional second half performance by Liverpool.

Down by two goals after the first leg at Anfield, the club from the North of the Comunidad Valenciana were back on level terms in the tie after 41 minutes through goals from Boulaye Dia and Francis Coquelin.

Thoughts of adding the scalp of Liverpool to the names of Bayern Munich and Juventus conquered in this Champions League run seemed very plausible at the half-time break.

However, three goals in the second half killed off any chances of a final appearance in Paris. At the end of the game, Villarreal did a lap of honour to thunderous applause in the Estadio de la Cerámica, as their fans once again showed appreciation for their efforts and achievements.