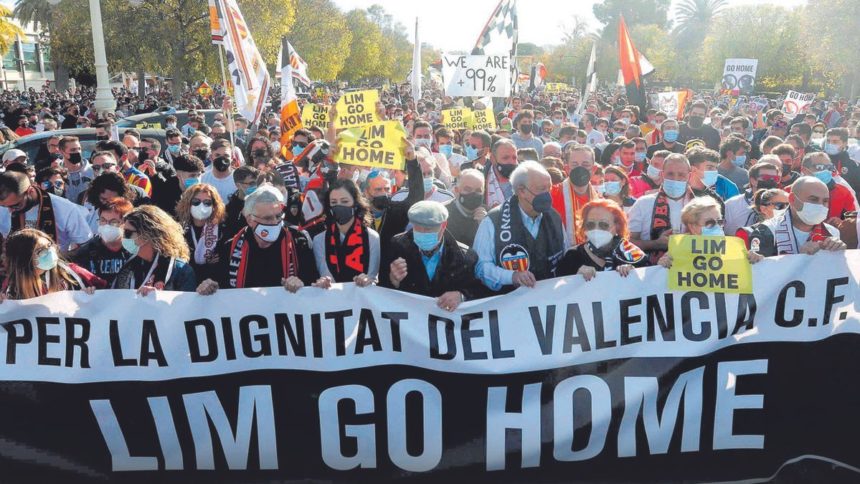 VALENCIA   FOOTBALL….CLEAN UP AND HOLD ON!

Valencia Football Club continues to be in the news despite the lack of activity on the field. The latest drama came when President Anil Murthy was relieved of his duties by Peter Lim. Not long after, José Bordalás was sacked as first-team coach of  Valencia CF.

The position of Murthy had become untenable after the leaked tapes by the regional newspaper ‘Superdeporte’, where he was alleged to have made statements regarding the sales of Gayà, Soler, Guedes and Gómez, and to have criticized Lim, himself.

Murthy said the tapes had been doctored and initially his claims seemed to have been supported by the board, but on May 30th the club released a curt statement removing him   with “immediate effect”.

The crux of the problem was regarding the potential sales of Gayà and Soler to Barcelona. Both players are out of contract in 2023 so it was implied in the tapes that the duo were available to the Catalan side for 60 million.

There is also audio footage in which a man, reportedly Murthy jokingly suggests he would put down 100,000 Euros to “kill” Soler if he left the club on a free transfer. He suggested that the Spanish midfielder “has to bring in money, because he grew up in the Academy, and the club had invested a lot of money in him.”

Murthy was also keen to sell Guedes and Maxi Gómez. He was quoted as saying, “We have a very clear plan, to clean up and hold on. We are cleaning up this year.”

However, the statement that probably did more damage than anything to his tenure was the direct jibe at his boss, Peter Lim. He described Lim as an “aficionado” and that Murthy wanted to sell Guedes and Gómez last season but Lim had said no. He criticized this approach of being a fan first, and a businessman second, and suggested that Lim did not have realistic expectations given the club’s “financial problems”.

The board could well have been also swayed to remove Murthy  by the mass demonstration at the Mestalla, when Celta Vigo played against Valencia on their last La Liga match of the season.

Co-ordinated in part by the newspaper ‘Superdeporte’, fans were requested to not enter the stadium, but support the club from outside the ground for the duration of the match on Avenida Suecia.  The official attendance was credited as 16,189 but many “aficionados” suggest it was much lower, and there was certainly more noise from the street outside than inside the Mestalla.

The move by the board to let Murthy go remains way too late for many, and Peter Lim’s standing with the fans continues to be fractious at best. The official statement distancing themselves from Murthy’s comments on the tapes will do little to get fans back on board.

“The Board values the importance of a close relationship between the club, the community, fans, government authorities, media and stakeholders” is a communique that says everything. The fact they have to put this in writing shows the gulf between the owners and the people of the club and city”.

Quarrels with the respected local periodical, (Superdeporte) the local government over the new ground, and a total breakdown with the ‘Curva Nord’ fans need to be addressed to give the current owners even a glimmer of a chance of claiming a “close relationship.”

A start in healing these wounds now lays at the feet of the interim CEO Sean Bai and Chairman of the Board Khojama Kalimuddin. Also employing a past player or businessman whose understanding of the inner workings of the club would be a good starting point. Summer transfer activity of a positive nature that looks more like a “hold on” of key players, rather the “clean out” would also help to appease the supporters, and stem the flow of fans who are contemplating not renewing their season ticket passes next summer.

On the clean out side, it seems Jasper  Cillesen is likely to be one of the first departures this summer, with NEC Nijmegen very keen on acquiring the Dutch international.

Mouctar Diakhaby also seems to have his days at the Mestalla numbered, as Marseille are rumoured to be closing in on his signature.

Bryan Gil would be a player Valencia would love to see again next year, but his Instagram account seems to suggest that he will not be returning.

Granada and Levante’s relegation could lead to Valencia looking to cherry-pick from these two teams. Luis Suárez and Luis Milla have already been linked with Los Che, and Roger Martí was frequently touted as a future Valencia player towards the back end of the season.

Holding on to some of the Valencia Mestalla youngsters should be another key priority. Kang-In Lee and Ferran Torres have been allowed to leave far too easily, and too cheaply, in recent times.

Marmadashvili, Jesús Vázquez, Christhian Mosquera, Koba Koindredi, Javi Guerra and Jesús Santiago Pérez (Yellu) have all experienced first team action this season and at least one of these could be an established name on the team sheet of the first team by this time next year. Definitely it is a case of “hold on” to this group of youngsters and get them tied to long-term contracts as soon as possible.

Levante UD showed fighting spirit in the second half of the season but their dreadful start proved impossible to overcome and relegation was confirmed with a couple of games outstanding.

Parachute payments for relegated clubs apply for a single season in Spain, after being introduced by Javier Tebas in the 2017/18 season. Another factor attached to additional funding includes time spent in the La Liga since the previous drop.

To this end, Espanyol had a salary limit of over 45 million to play with when they went down in 2020. Unsurprisingly, they bounced straight back up, and more importantly, they were able to keep striker RDT (Raúl de Tomás). The forward became the league’s top scorer with 23 goals during Espanyol’s promotion year, and was undoubtedly a key factor in their immediate return to La Liga.

Levante UD will not have that amount of money to play with, but they will have a healthy chunk of change to “hold on” to the backbone of their team. Fans will be quietly confident of a quick return to the top flight, and will feel that the current coach Alessio Lisci is the man to oversee that quest.

It’s official!  Gennaro Gattuso is  now the first-team coach of Valencia CF. His press presentation is today at Mestalla and he has a contract until June 30th of 2024.