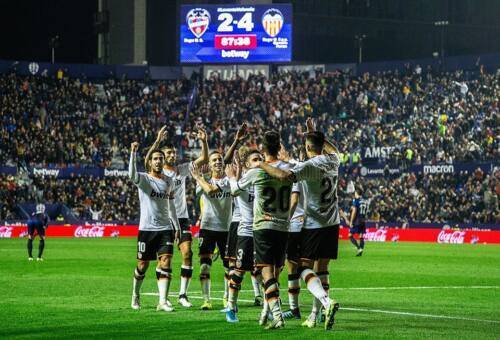 ##As the sunset fades on 2019, Valencia fans are assured of European football at the Mestalla at the beginning of 2020. What will be decided soon is whether they will continue into the knockout stages of the best club competition in the world that is the ‘Champions League’ …or drop down to the poor relation with the last 32 of the ‘Europa League’.

Group H was always going to be a tough task. To finish in the top two when pitted against Chelsea, Ajax and Lille would be no mean feat. Lille have been disappointing but the other trio have lived up to expectations, drawing blood against each other.

As the clubs enter the final set of games in December, Valencia and the teams from England and Holland all have a realistic chance of qualifying.

Valencia currently have a better head to head than the team from London but a less convincing one against Ajax. In turn, the Dutch side has a superior match up against Los Che, but an inferior one against Chelsea. This leads to numerous permutations. Realistically, Valencia need to win in Amsterdam to give them the greatest opportunity of progressing.

With Chelsea at home to Lille, the form book suggests a victory for the “Pensioners”. The French team has lost both away games in the group to date and to expect them to secure a point at Stamford Bridge could well be wishful thinking. Things could have been far different, if not for the dropped points at the Mestalla against Chelsea and in Northern France.

The match against the Londoners was a pulsating affair, played in an electric atmosphere. The contest had almost everything and the 2-2 draw could have easily ended 6-6, as Frank Lampard suggested in his post-match interview.

The away draw at Lille, when succumbing to an injury time equalizer, is much harder to stomach. It underlines Valencia’s inadequacy to kill off games in clinical fashion like the top, top clubs do.

This failure also surfaced in the league with the recent away defeat to Betis being a prime example. Scoring first through Maxi Gomez, the lead was frittered away when the former Valencia star Joaquín equalized within five minutes. Conceding goals immediately after taking the initiative is another trademark flaw that fans have become accustomed to this season. To make matters worse, in the third minute of injury time, another former Mestalla favourite Sergio Canales curled home a classic free kick to give all three points to the team from Seville.

Injury time goals have cost the Valencia CF points this year since day one. In the very first game of the season, Real Sociedad equalized in the eleventh minute of injury time to deny Los Che a winning start. Then the recent game against Getafe should have also been put to bed but Valencia squandered a two goal lead from what looked like an unassailable position.

Against Leganés and Osasuna, Valencia took leads in those matches only to come away with one point from six. Despite these irritations, Valencia are beginning to show a sign of what a formidable side they can become. Manager Albert Celades is finally beginning to stamp his identity on the club’s style of play.

Before the year closes, Valencia fans have a mouth-watering contest with Real Madrid at the Mestalla in December to look forward to. Then, just eight days into the New Year, Los Che will play ‘Los Galácticos’ again…this time in Saudi Arabia in the Spanish Super Cup!

Historically played on neutral territory between the League Champions and the winners of the Copa Del Rey, this year’s event will have a new format. Two extra teams (the second and third placed clubs in last year’s La Liga – Atlético and Real Madrid) have been added to create a competition that comprises of two semi-finals and a final.

Valencia registered their displeasure about these changes and voiced a formal complaint but the trip to Jeddah will go ahead. The financial aspect of the trip is the biggest bone of contention, as both Real Madrid and Barcelona are anticipated to earn three times more for their participation than Los Che.

Prize money is based on three considerations. Firstly, for participating the clubs will get close to one million Euros each, secondly for sporting awards (finishing first or second, etc.); there are additional financial rewards available. However, the biggest pot, and the one Valencia are so angry about is the third aspect of the money sharing, which is based on a club’s previous honours.

Ludicrously, even if Valencia win the tournament, and both Real and Barcelona are knocked out in the semi-finals, the latter two clubs will still receive more money than Los Che!

Over at Levante UD, the ‘Granotas’ continue to go about their business with a minimum of fuss. Paco López continues to do an excellent job and his efforts have been rewarded with a new contract through to the summer of 2023.

Arguably for Levante fans, their biggest game of the season is the home fixture with their more illustrious neighbours. A match up just before the Christmas break at the ‘Ciutat de Valencia’ went the way of the team in white but not before a major scare for the visiting supporters.

In an action-packed match, Levante were two goals to the good inside twenty minutes after the home team’s striker Roger Marti had beaten Cillessen on his near post for the first. He then clinically dispatched a penalty for the second, after Parejo brought down Rochina as he weaved his way through the Valencia defence.

The Torrente born striker then completed his hat-trick on the stroke of half-time. Unfortunately for Marti, who started his career with Valencia, it was this time in the Levante net. Parejo’s precise corner got a slight deflection in flight from another player to deviate onto Marti’s leg. His connection to the ball went goal bound and avoided the despairing hands of Aitor Fernández… to give the visitors a lifeline.

So, with the last kick of the first half, Valencia were back in the game. From that point on Los Che never looked back. Another defensive mistake early in the second half let in Rodrigo, who raced towards goal, before drawing out the keeper and dinking a cute little cross right onto the forehead of the incoming Kevin Gameiro.

The Frenchman then teamed up with Ferran Torres to hit a ferocious shot past the Levante UD keeper to complete the come back. Just for good measure, Ferran himself added a fourth for the visitors with two minutes remaining.

The victory gave Los Che their first win at Levante since 2011 to come away with maximum points. They are now firm contenders for the Champions League in terms of their position in La Liga.

Finally, the Association of Valencia footballers will be offering something a little different for fans over the Christmas break. Football and opera will combine to create the first ‘Gala Benéfica de Campeones’ on December 28th at the Kinépolis in Heron City.

For more information and tickets go to https://www.masfestivalsymphony.com/gala-de-campeones/