You are here: Home  /  Sports  /  VALENCIA FOOTBALL… LOOKING FOR THE END PRODUCT!
Sports 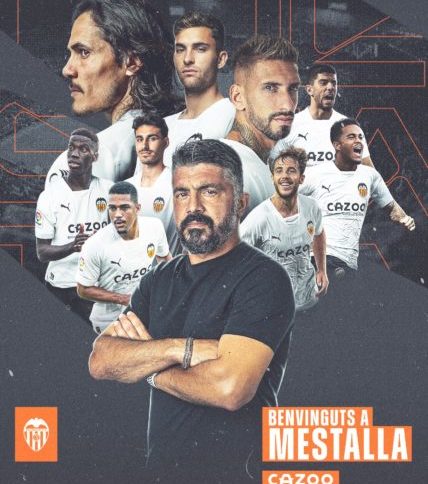 In the three league games that Valencia have played so far, this season, they have deserved some sort of reward from every one of them. The football has been swift, decisive and well-controlled until it reaches the opponent’s penalty box, and then things go woefully awry. With no goals to date in open play, the need for a striker who will guarantee a regular end product is abundantly clear. That is why a crescendo of noise greeted the Mestalla when new signing Edison Cavani was introduced to the crowd as a Valencia player, shortly before the kick-off with Atlético Madrid. The Uruguayan has scored goals with regularity in Italy, France and England, and there is no reason to think he will not do the same in La Liga.

How Valencia could have done with him on the pitch against “Los Colchoneros”. The statistics say it all; the home side had over 70% of the possession but could only muster two shots on target. Atlético had seven efforts that peppered the Valencia goal, including the wickedly deflected shot from Griezmann that gave the team from the capital all three points.

In the first game of the season against Girona, which was arguably their worst performance so far, Los Che had to rely on a Carlos Soler penalty just before half time to get off to a winning start.

The next match saw the team travel to the Basque region. At the San Mamés stadium, Valencia had well over 60% of the possession but did not have a single shot on target. Bilbao only had two shots on target but one of them resulted in a goal, for Álex Berenguer. So three points from a possible nine, but it would have been so much more if Valencia could have found the end product to match their stylish approach play.

Cavani’s signature is a huge fillip to Gattuso and the Valencia fans. With Real Sociedad and Villarreal being threatening suitors, and the future of Maxi Gómez complicating things, it seemed that Los Che would be left frustrated in this particular quest. The incentive of a two-year deal as much as anything seemed to be swaying factor for the man from Salto to finally side with “Los Murciélagos”. However, he will not be partnered up front by his countryman Maxi Gómez. He has agreed to join the Turkish side Trabzonspor for a fee reported to be in the region of six million.

The departure of another forward, Manu Vallejo to Girona, was balanced by bringing Justin Kluivert in from Roma. The Dutch international’s father Patrick played ten games for Los Che in the 2005-2006 season and was instrumental in getting the deal over the line, once his son’s intended transfer to Fulham was thwarted by the denial of a work permit by the UK government.

Undoubtedly, the saddest departure for Valencia fans is that of the local born star, Carlos Soler, who is heading to France and Paris Saint-Germain. The frustration of continually losing home grown talent because they think they will not win trophies with Valencia is becoming the norm now, rather than the exception. Alcácer, Ferran and Soler have all decided that this is the route they must take to further their footballing careers.

Twenty years ago, the likes of Albelda and Vicente did not feel the need to seek a transfer to find silverware; they felt that they had as good a chance as any of winning medals by staying put. Financially, Soler seems to have gone cheap in today’s market as well. Eighteen million euros plus a possible three million in add-ons seems quite mild in comparison to what some of his peers are fetching on the transfer scene.  It will be tough for Soler to make the regular starting line up in Paris, and if is playing time is limited; it could well cost him a place with the Spanish squad going to Qatar later this year for the World Cup.

Another midfielder on the move is Uroš Račić. The likeable Serb does not seem to be part of the new manager’s plans, and consequently, he is set to go out on loan to Sporting Braga for the rest of the season. The void left in midfield by these two departures looks set to be filled by the Portuguese youngster André Almeida and the return of last season’s loanee Ilaix Moriba from Leipzig. Nico González, a loan signing from Barcelona will also add a creative flair to the midfield, which has been lacking since the departure of Parejo to Villarreal.

Valencia have also bolstered up their defence by signing the Turkish international Cenk Özkacar on loan from Olympic Lyon. Other exits in the transfer window are Guedes going to Wolves, Cillessen to NEC Nijmegen and the free agent Denis Cheryshev bagging a contract with Venezia in Serie B. Koba has been loaned out to Real Oviedo for playing time, and Jorge Sáenz heads to Leganés on loan for a similar reason. All in all, the transfer window seems to have been favourable to Valencia. Just how kind will boil down to how much Cavani can give to the team, in terms of goals and assists.

Across the city, there can be no doubt that Levante UD has done some fantastic business in the transfer market, and are leaving no stone unturned in trying to get promotion back to La Liga at the first time of asking. Having come to terms with losing “El Comandante” José Luis Morales to Villarreal, the Granota fans then had to stomach the blow of centre forward Roger Martí joining Elche for around 3 million Euros. Carlos Clerc also headed to the South of the region, whilst Dani Gómez, Gonzalo Melero and Mickaël Malsa went to Espanyol, Almeria and Real Valladolid respectively.

Then the North Macedonian international Enis Bardhi headed to Turkey, where he will team up with Maxi at Trabszonspor. Aitor Fernández and Jorge Miramón made up the other players to leave who had seen significant first team action last year. On the flip side, Levante UD has bought in some very exciting talent that should shine in the second tier of Spanish football.

Joni Montiel arrives from Rayo and one time Levante favourite Vicente Iborra returns home on loan from Villarreal. Local lad and former Osasuna and Leganés  player Robert Ibáñez joins Mustafi in securing a spot on the Levante roster and Mohamed Bhouldini has signed from Fuenlabrada for a fee of around three million. However, the two signatures that have really got the Levante fans excited are those of Wesley on loan from Aston Villa, and Charly Musonda, who was obtained on a free transfer from Chelsea.Wesley has seen international playing time with Brazil and Charly has starred for the Belgium Under-21 side, having spent time recently out on loan at Celtic and SBV Vitesse Arnhem. The new signings have gelled well quickly and Levante has made a decent start to the season, having won one and drawn two of the three games played.

The games in September look easier on paper than the ones they had in August, so the Levante UD fans will be hoping for a good 30 days, and to be placed in one of the promotion spots in ‘La Liga Smartbank’ by this time next month.