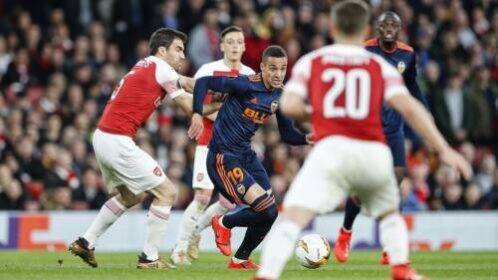 ##Valencia will enter the final stretch of the season with everything to play for. They are still fighting on three different fronts for meaningful objectives that will determine whether their centenary season will be deemed a successful one or not. Their first aim is to secure European football at the Mestalla next season. Currently lying fifth, it could be a tall order to grab one of the top four spots that would guarantee Champions League football.

Barcelona, Atlético Madrid and Real Madrid are as good as confirmed for the top three places and Getafe are realistically in a better position to secure qualification than either Valencia or Sevilla. However, they do still have to face Barcelona at the Nou Camp… which could create a further twist in the equation. Sevilla’s surprising loss at home to Leganés has now left the club from Andalusia as the outsiders of the three teams with two games left for all concerned.

One thing in favour for Valencia is the positive head-to-head that the club has against both sides. If, by some strange quirk of fate, Valencia finished joint fourth level on points with either Getafe or Sevilla at the end of the league campaign then it would be “Los Murciélagos” that would then claim the higher position. This is courtesy of the league ruling that considers matches played against the opposition a more telling factor than goal difference.

The second objective is to win the Copa Del Rey. Valencia’s last significant silverware was this very trophy, when Ronald Koeman’s side beat Getafe 3-1 in a one-sided final at the now defunct Vicente Calderón stadium in 2008.  Eleven years later, it is merely Barcelona that stands in the way of Valencia repeating this achievement. With well under 25,000 tickets available for supporters, many season ticket holders have been left ticketless. The club did their best to be fair to all “socios” by organizing two different “sorteos” observed by a notary. Sadly, this did little to dampen the frustration of many especially the ‘Curva Nord’ who carried out a “silent protest” for the first half of a recent home game, against the method decided for ticket distribution.

Barcelona themselves were looking to complete the triple this year. Along with the Copa Del Rey they were also very well placed to reach the final of the Champions League, after beating Liverpool 3-0 at the Nou Camp in the first leg of their semi-final but did not expect Liverpool to beat them 4-0 at Anfield!

The first part of their trifecta is already completed, having romped home in the league with three games to spare. Historically, this would have seen Valencia playing Barcelona in the Spanish Super Cup at the start of next season but the Spanish football federation has approved a new format for 2020 that will new include four teams, (the league’s top two and the two Copa finalists). As Barcelona has qualified for both, Real Madrid has been added to the mix as a result of their third place finish in La Liga.

At the same meeting they also agreed to the Copa Del Rey reverting to a single match format, apart from the semi-final stage. Finally, the four competitors in the newly evolved Super Cup are exempt from the first two rounds of the Copa Del Rey. These changes have angered Valencia to the point that they have rejected the proposals. To add further fuel to the fire, the Spanish Football Federation are mulling over an idea to play all the Super Cup matches in Saudi Arabia, following in the footsteps of the Italian League who played their Supercoppa there in January, when tickets were only available to men.

The Spanish federation also tried this season in vain to play some league games in the USA but a Players’ Union revolt helped to quell that notion fairly quickly. It is likely that we have not heard the last of this saga and there will be further squabbling on this issue throughout the off season. Thirdly, Valencia also has a chance to compete in the Champions League next year by winning the Europa League this time around. However, their hopes of bagging this trophy took a major blow in the first leg of the semi-final, when they crashed to a 3-1 loss to Arsenal in London.

The two teams have met in Europe several times before, the most memorable being in 1980 when Valencia came out victorious in the first ever penalty shoot out in a European club final competition. The game ended 0-0 in the ruinous Heysel Stadium in Brussels. The first penalties taken by Mario Kempes and Liam Brady were saved by the respective goalkeepers. The next nine penalties found the back of the net, and then Graham Rix had his effort saved by Carlos Pereira to give Alfredo Di Stefano’s men the trophy.

Connections between the two clubs do not end there. Gabriel Paulista, Francis Coquelin and Shkodran Mustafi have played for both teams and Arsenal´s coach Unai Emery had a successful spell as coach at the Mestalla. The energetic Basque had many admirers at Valencia. Unfortunately, he blotted his copy book with his celebration antics as the coach of the Sevilla team that scored a last minute goal to knock Valencia out of the Europa League, in the semi-final stages of the competition in 2014.

That feeling was somewhat dispelled after the visitors took an early lead through Diakhaby. The French defender was on hand to help home Rodrigo’s header after the Spanish forward had been allowed to head back towards goal, connecting with a Parejo corner that went beyond the back post.

However the early goal, as so many times with Valencia, led to an increased vulnerability. Within twenty minutes, the home side had scored two goals and established a lead they would never relinquish. To compound the situation, Arsenal got a third in the last minute of play to dilute the chances of Valencia going to the final in Baku significantly. A full Mestalla will do their best to help the team overturn the deficit but it is a tough task. The fans will be hoping for another glorious night in Europe.  If Valencia are to get on the plane to Azerbaijan, it could rank as one of the best European nights in the club’s history.

Meanwhile, things are beginning to get a little frantic in the north of the city as Levante UD continue to be dragged into the relegation battle. However, a comprehensive 4-1 victory over Rayo Vallecano in their last home game gave them a little breathing space. One victory from their final two games will see them staying in the top flight for another season at least.

Anyone wishing to watch football in Valencia can obtain tickets from the box offices of both clubs. Further information can be found on the following websites.