You are here: Home  /  Sports  /  VALENCIA FOOTBALL…WILL VALENCIA BE IN EUROPE NEXT SEASON?
Sports 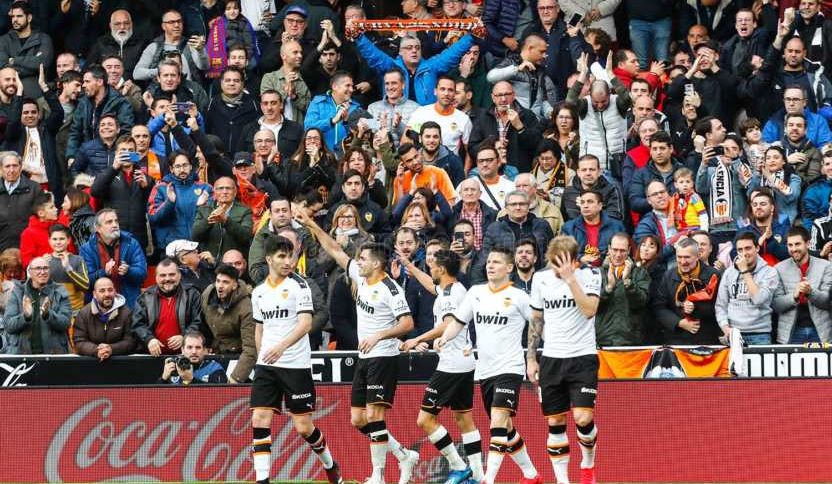 VALENCIA FOOTBALL…WILL VALENCIA BE IN EUROPE NEXT SEASON?

##As the sun sets and Britain finally leaves the European Union, Valencia fans are asking themselves will the club remain in Europe next season.

Currently they are targeting that mission on two separate fronts, the Champions League and La Liga itself.

The most unlikely is automatic entry into the Champions League next time by winning the trophy outright this year. After finishing top of a tough group that included both Chelsea and Ajax, the draw for the first round of the knock out stages and the last sixteen pitted Los Che against Atalanta of Italy.

I Nerazzurri (The Black and Blues) are based in Bergamo and played against Valencia at the Mestalla as recently as August 2017 when the two teams met in the Trofeo Naranja.

Only four players remain in the Valencia ranks from the starting line-up that day, (Gayá, Parejo, Soler and Rodrigo) whilst a fifth, Jaume Doménech, replaced Neto during the game. The Italians won that match by the odd goal in three. They have been on fire in front of goal since the start of the year, having planted five goals past Parma in Bergamo, and an amazing seven goals past Simone Zaza’s Torino in Turin a few weeks ago. The club, that were formed by Swiss students in 1907, have a multi-national look to them.  Their main threats being Brazilian Rafael Toloi, (who scored in the 2017 Trofeo Naranja) Slovenian Josip Iličić, the German born midfielder Robin Gosens, Dutch centre half Marten de Roon, and the very talented Croatian Mario Pašalić, who is on loan from Chelsea.

The first leg was played at the San Siro with a buoyant Atalanta side  winning 4-1.  The return fixture is due to be played at the Mestalla in March.

Another way Valencia could have guaranteed European football next year was by retaining the Copa Del Rey. This year’s victors will get automatic entry into the Europa League group stage.

This little nugget will prove just as enticing for many clubs as the Spanish Super Cup. That debacle took place in Saudi Arabia just after Three Kings. Ironically, the League champions Barcelona and the Cup Winners Valencia got knocked out in the semi-finals by Atlético and Real Madrid respectively, meaning neither winners of silverware in 2019 were in the Super Cup final.

As a direct consequence of that, the 2020 Copa Del Rey structure has a new complicated format. This means that the four competitors that competed in this year’s Super Cup get a bye right up to the round of 32 (Dieciseisavos de final).

Furthermore, on entry, the four Supercopa de España teams were drawn out against the four lowest ranked clubs left in the competition, with the minnows automatically receiving home draws.

Valencia were picked to play UD Logroñés. The club from the La Rioja region of Spain acquitted themselves well, and only lost by a single goal from the in-form Maxi Gomez.

Exactly a week later Valencia were back in action again, this time against Cultural Leonesa, who had sensationally knocked out Atlético Madrid in the last round, to create the shock of the tournament to date.

They very nearly repeated the feat against a listless Valencia who needed a penalty shoot out and two saves by Jaume to progress through. Neither team had managed to find the back of the net in 120 minutes of normal play.

Valencia’s reward for reaching the last eight is another away tie, this time against La Liga counterparts Granada where they 2-1. Roberto Soldado scored both goals for the Andalusians and  prevented Valencia from retaining the trophy on a fateful night at El Nuevo Estadio de Los Cármenes​ .

The other opportunity for Valencia plying their trade on the continent next season is through La Liga. This looks the most likely route for success.

Matches between two clubs struggling this season, Eibar and Celta Vigo, tested Valencia’s metal to the core. They resolutely eked out three points in both games with an identical score (1-0) to continue their momentum up the table.

However, the highlight of the year to date was the home game with Barcelona that was nestled between the Eibar and Vigo contests.

Valencia have waited 13 years for victory over the team from the Nou Camp at the Mestalla and the ease at which Barcelona succumbed to Los Che’s onslaught must have been a worrying sign for their new manager Setién.

Despite having their usual large slice of possession, the Catalans lacked any real purpose in the danger areas and it was Valencia who had a golden chance to take the lead when they were awarded a penalty close to the interval for a foul on Gaya by Piqué.

VAR checks mean the penalty taker has time to think and reflect and this procrastination process can only assist the goalkeeper. Maxi Gomez took on the responsibility of converting the penalty, once VAR had confirmed the obvious… but by that time self-doubt had crept into the Uruguyan’s mind and Ter Stegen guessed the right way, to parry the weakly-struck effort away to safety.

To the South American’s credit, he refused to let the miss impact his game. The burly centre-forward made amends, just after half-time, when his cross-cum-shot took a wicked deflection off the luckless Jordi Alba… to send the home fans delirious with delight.

Barcelona responded dangerously with threatening and intricate play but were toothless in attack where they really missed the injured Luis Suárez.

It was his international teammate that won the game for Valencia with 13 minutes left on the clock. A surging run from Ferran Torres concluded with a through ball to Maxi Gómez. With time, the striker took one touch to control the ball and then a second to literally pass the ball into the net and past a stranded Ter Stegen.

The only hiccoughs to date, this year, apart from the Super Copa semi-final defeat was the humiliating loss at the hands of struggling Mallorca in the Balearics. The 4-1 drubbing was also exacerbated by the sending off of captain Parejo and losing 3-0away to Getafe too.

If Valencia can find a way of gaining points on their visits and maintain their solid form at the Mestalla, then the signs are good for a top four spot and Champions League entry.

This quest will be buoyed by the capture of the Italian international Alessandro Florenzi, who has been signed on loan until the end of the season from Roma. As a side note in the transfer window, Valencia decided not to take up the option to buy the promising Elche midfielder Gonzalo Villar. Los Che had first dibs on any pending transfer but declined the opportunity. This allowed the Murcia born star to head to Roma for a fee that is reportedly worth 4 million Euros, plus potential add ons.

Meanwhile, things had not been so good at Levante UD. A dip in form has led to Los Granotas slipping steadily down the table and closer and closer to the relegation zone. However, their famous 1-0 victory over Real Madrid has been a shot in the arm for the Valencia side in La Liga.

One would have thought the manager Paco Lopéz may have been tempted to dabble in the January transfer window. His purchases have been limited to date with the only new player being Bruno González who swapped clubs with Erick Cabaco (Getafe). Goalkeeper Oier Olazábal has moved on to Espanyol, adding over one million Euros to the Levante coffers and winger Ivi López has agreed a loan move to SD Ponferradina.

Having kept faith with his current squad he will be hoping to bag a few additional points in the coming weeks.

Anyone wishing to get tickets for Valencia or Levante games can do so by visiting the box offices at the grounds or through the official websites.