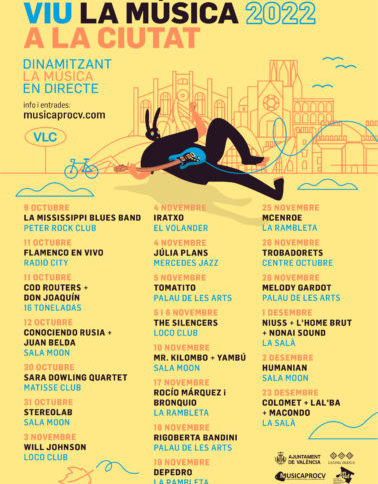 The circuit Viu la música a la ciutat proceeds with its concerts in the aim of energising Valencia’s music halls, with the support and financial aid of the Valencian Council. This is an initiative of the Valencian council in collaboration with the Association of Valencia Music Promoters, featuring artists such as Stereolab, Melody Gardot, Rigoberta Bandine, Depedro and Trobadorets y Colomet. These concerts will take place in some of Valencia’s most vibrant clubs and music venues such as ‘Loco Club’, ’16 Toneladas’ and ‘Sala Moon’ among others.

This initiative, beginning in July, has as its objective the dynamization of Valencia’s music industry and raise support for the Cap i Casal concert halls. Since then performances from artists such as Jorge Drexler, La Casa Azul and Muchachito Bombo Infierno have formed an essential part of this project.

The programme of music so far has stood out in terms of its musical quality, stylistic variety, parity of genre and diversity of origin. Furthermore, this has been achieved with 30 performances in 13 concert halls and with the collaboration of 9 promoters in the city of Valencia.

Support for the music industry is much needed for the performing arts in Valencia and internationally after two years of lockdowns in response to the Covid-19 pandemic.

As the councillor for culture Gloria Tello stated “We are aware that professionals in the cultural sector need the full support of the public administration. Thus, in the Council we have approved a grant not only for music promoters, but also directly for the music halls. We have a wealth of musical talent and culture in our city, which creates jobs, thus we will always support these initiatives.”

These concerts will restart this month with performances by the jazz quartet, the Sara Dowling Quartet at Matisse Club on the 30th October, followed the next day by Stereolab performing at Sala Moon.

November’s programme will be formed of 20 performances at eight different Cap i Casal stages. Here  are some key dates for your diary:

The festival has also booked dates for December. Valencian artists Niuss, L’Home Brut and Nonai Sound will perform at La Sala on the 1st of December. Local Pop-Rock Band Humanian will be playing the next day at Sala Moon. Just before Christmas, La Sala will play host to Macondo and the urban rhythms and electronics of Colomet and Lal’ba.