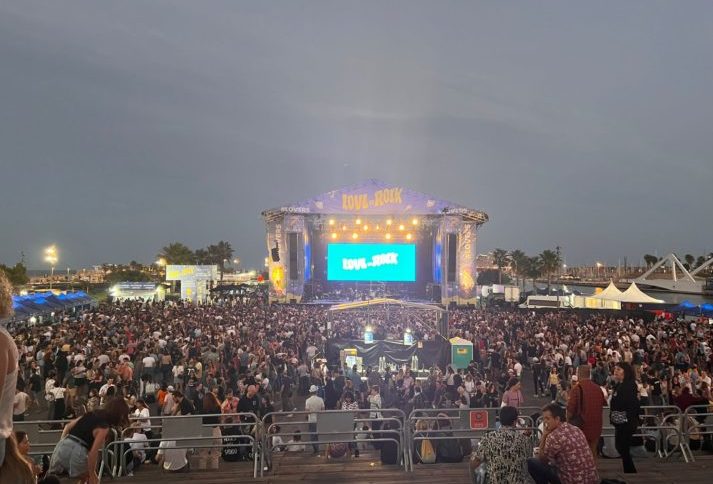 On what started as a blistering October afternoon, the Love to Rock festival entered its second day. Vibrant energy pulsated through the audience, all seeming to share that most sought after yet most fleeting of emotions: happiness.

Comprising two stages, Marina Norte and La Pergola, Love to Rock provided an eclectic mix of big name acts and DJs designed to get the crowd dancing. With the main stage “Marina Norte”, not opening till four, we made our way to the singular source of sounds, which did not fail to disappoint.

Rock Nights electrified the crowd with a mix of their own songs and classics, while a giant inflatable champagne bottle was bounced over our heads. Adding a measure of cuteness to the occasion, the band brought a little girl on stage from out of the crowd, waving pink pom poms. Agro DJs did a completely 180 on the vibes they brought to the stage with their red feathered skull headdresses, while pumping out their own remixes of party anthems like ‘I’ve got a feeling’ by the Black Eyed Peas and “I’m begging you” by Maneskin.

The Marina Norte stage was opened by Fat Gordon, a standout figure of the Valencian rock scene, in what would be his third appearance out of five during the course of the festival. Maadraassoo graced the stage twice that evening, providing his audience with a mix of quality pop-rock and electronic music. Arde Bogotá returned the stage to a more classical rock feeling, with their own personal twist, a band of the younger generation, bringing their own message to the stage, accompanied by catchy rhythms, distorted guitars

However, disaster struck during Maadraasso’s second set. Clouds had been brewing over the centre of Valencia for over an hour, and at 9:30, the first rays of lightning cleaved through a sky that had so recently been filled with song. Not long later, the heavens opened and turned what had been a mass of head bopping, fist pumping dancers into a bedraggled and sodden mass, all running for the nearest shelter. Many rockers remained to weather the storm, in the hopes that the rolling thunder and flashes of lightning would pass them by.

After just 45 minutes the faithful rockers were rewarded for their patience. The rain cleared up and the thunder rolled on by. Following the squall Zahara had a particularly stand out performance, especially to attendees who were only novices in the Spanish rock scene. Their mix of the electronic and rock genres, paired with striking visuals and choreographed dances had the crowd howling for more. Meanwhile on the Pergola stage, DJ Giorgio Bonnetti was energising the crowd with an artistically blended mix of Afro beats, funk, groove and punk and was the stage’s last occupant until closing time. Come rain or shine, Love to Rock rocked on.

Report by Danny Weller and photos by Shemaiah Rose