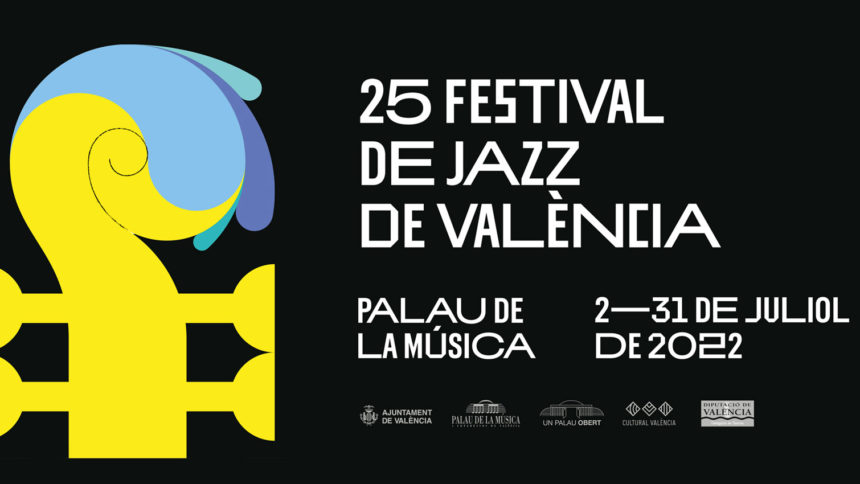 It will take place from 2 to 31 July at the Teatro Principal de València and in various neighbourhoods and towns of the city. The design of the image campaign is by Diego Mir. Councillor Gloria Tello said that the Jazz Festival “is once again the great festival it was before the pandemic, but it is also very symbolic, as this is the 25th edition”. It is an edition “loaded with Grammys, which is designed so that all citizens can enjoy the best jazz, and in which we have increased the presence of top-level international artists, national and local”.

“In addition, this year in particular, as we did last year, we continue to give all our support to our musicians to help alleviate the negative effects caused by the pandemic, including the loss of income. And we must remember that in 2015, out of 9 concerts, only 3 featured Valencian jazz musicians, and this year, in the Festival, out of 18 concerts, 12 will be with Valencian professionals and, if we add the seminar, there will be more than 100”, he added.

“Another aspect to highlight in this festival is its budget, which almost doubles that of last year, reaching 248,231.50€”, the councillor indicated; while the director of the Palau de la Música, Vicent Ros, assured that “with a programme like this we can affirm that we are clearly at the forefront of jazz festivals in the Valencia Region and the whole Mediterranean arc of Spain”. “The Teatro Principal is an ideal place to enjoy the best jazz”. “It is an unrepeatable festival for several reasons, because it is creation, because it is pure music and it is jazz”, he added.

All the concerts will start at 20:00h and prices range from 5€ to 30€. The exception is the concert on 9 July, that of Damaris Gilabert and the Happy Band Sedajazz Kids, at 11:00h. The concert that kicks off the Festival and will feature the Municipal Symphonic Band (2 July), as well as the concert that closes the performances at the Principal, the tribute to Toni Belenguer (17 July), are free of charge.

“The València Jazz Festival is back with a line-up loaded with Grammys, which internationally brings together jazz legends such as John Scofield (5 July), considered the innovator of modern jazz guitar, who presents his latest project Yankee Go Home at the Festival. As well as the great double bass player Ron Carter (10 July), the legendary member of Miles Davis’ historic quintet between 1963 and 1968, who will visit Valencia accompanied by his quartet Foursight. Two great jazzmen, saxophonist Joe Lovano and trumpeter Dave Douglas (13 July), will present their latest work, Other Worlds. Another highlight is the visit and debut at the festival of Snarky Puppy (12 July), one of the most popular and influential bands in modern jazz with four Grammys, who will be presenting Immigrance”, reported Gloria Tello.

Also making her debut at the València Jazz Festival will be Sílvia Pérez Cruz (6 July), who will present her interdisciplinary fusion Farsa with the Farsa Circus Band. The jazz trio Colina-Miralta-Sambeat (CMS) (9 July) will offer a fusion of jazz and flamenco, along with Juan Gómez “Chicuelo”, one of the most renowned flamenco guitarists.

Valencian jazz will kick off the Festival with the Municipal Symphonic Band of Valencia, conducted by Rafael San-Espert, with the group Spanish Brass and Barcelona Gospel Messengers, who will offer the audience a repertoire of the best standards and gospel (2 July). The Orquesta de València returns to the Festival with the great trumpeter David Pastor (8 July). They will present the Symphonic Jazz Sketches project, which will be conducted by Miguel Ángel Navarro. The next event will be an ensemble of Valencian musicians, who will perform a tribute to the legendary album The Black Saint and the Sinner Lady by Charles Mingus (14th July). And the Festival will close at the Teatro Principal with a tribute to the great trombonist Toni Belenguer (17th July) with another ensemble made up of some of the best musicians in the Comunitat Valenciana.

“The Jazz Festival is also characterised by its pedagogical aspect and, in this sense, the teachers from the Berklee campus in Valencia, Berklee All Stars (7 July), are returning with a concert of jazz fusion, Latin jazz and original music”, said the councillor, who also highlighted the debut of the singer Damaris Gilabert with the Happy Band Sedajazz Kids (9 July) with a show as part of “Menut Jazz”. In addition, the Palau de la Música’s International Jazz Seminar, organised by Sedajazz, is back for its 22nd edition and will be held from the 27th to the 30th of June. It is aimed at students and professional jazz musicians who will be able to attend Master Classes on different subjects, jam sessions and other complementary activities. This year the activities will be held at the headquarters of the Sedajazz collective.

Jazz in the Neighbourhoods and Towns of Valencia
Glòria Tello explained that there will also be free open-air concerts in the “Jazz als barris i Pobles de València” cycle, which this year will take place from 16 to 31 July and will all start at 8:00 pm. Ki Big Band kicks off the series in the Parque Central (access via Calle Filipinas); followed by Lirica Big Band in the Plaza del Santísimo Cristo de Nazaret (17 July); Jeff Jerolamon Jazz Experience in the Plaza de la Iglesia de Campanar (23 July); Screaming Pillows in Massarojos (24 July); Pilar McCarthy Quintet in the Perellonet (30 July) and Arantxa Domínguez and Ricardo Belda in the Plaza de Patraix.