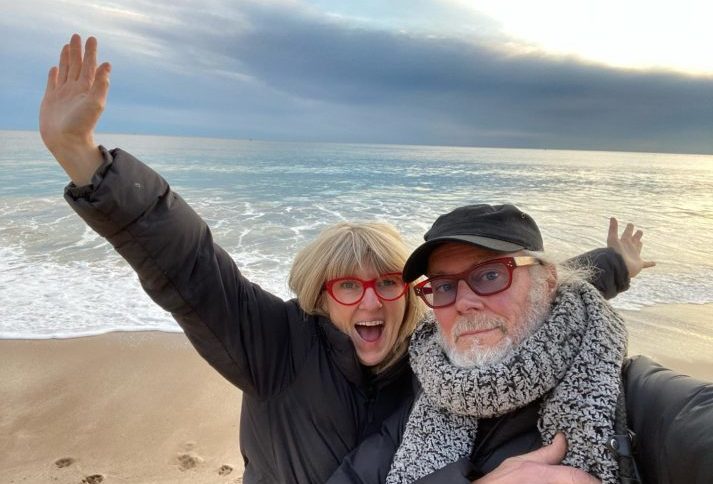 24/7 VALENCIA: Tell us something about both of your backgrounds in music and the name of your band…

STARLITE CAMPBELL BAND: Well, we are pretty seasoned songwriters and musicians and, following a whirlwind musical romance, we married on May 12, 2014 in Inveraray, Scotland.

Suzy is a fine vocalist and songwriter plus plays fiendishly groovy bass, guitar and keyboards. She studied Media & Performance at Salford University and was a member of Folk Rock band Megiddo, who released an EP in 1994 followed by an album in 1996.

In 2012, she formed the band Starlite and drafted in Simon on guitar. That year they played many gigs featuring all original material including ‘Mannifest’, a three day festival on The Isle of Man.

Simon is a guitar player, vocalist, songwriter and record producer and following a number of original bands he was signed to Polydor Records in the early 90s and released an album with his band ‘Little Brother’.

After the band split he went on to form the Disciples and released an album in 1994. In 2011, Simon was nominated in the Best Vocalist category in the British Blues Awards 2011 following the release of his debut solo album ‘ThirtySix’. 2014 saw Simon release his second solo album, ‘The Knife’ which reflected his increasing love of acoustic music from both sides of the Atlantic.

We started the Starlite Campbell Band in January 2016, co-writing our new blues album ‘Blueberry Pie’ in just two weeks in April and recorded it at Supertone Records over the next few months.

How did you find living and working as musicians in Spain?

To be honest, it was pretty tricky as we are full-time musicians with a session band from the UK and we all need to earn a living! The scene is pretty full of Jazz and Latin based music, Rock, Pop etc…so we need to travel to play live. There are festivals over here, which we were planning to play over the course of this year. Hopefully, our agent can string all this together into a tour in the future.

Could you fill us in about your studio and record label that was in the Valencia region?

Of course! We ran ‘Supertone Records’ and operated a world-class vintage/analogue studio from Estivella, which was in the mountains near Sagunto, around 25 minutes’ drive from the heart of Valencia.

It’s centered around a Trident Vector 40 channel mixing console with a great history from Bjork, Alvin Lee to Rammstein and the Manic Street Preachers, complimented by many vintage instruments, microphones, outboard and amplifiers including a Yamaha acoustic piano, Hammond Organ and Wurlitzer Electric Piano.

We principally set this up to record our own music but we do let it commercially for around 20 weeks a year. It’s a fantastic creative space and the new album was recorded and mixed there and is receiving fantastic reviews from all over the world from North America, Canada to Australia and everywhere in between.

We also work with artists and release them on the label. Currently, we have world class saxophonist and woodwind player, Javier Vercher, who released his duo album ‘Filantropia’ with Jorge Rossy. We also have Ales Cesarini featuring Payoh Soul Rebel who released ‘Nyabinghi’ on Supertone Records.

Would you take us through each track on your latest album, ‘Blueberry Pie’?

Well, it’s a blues album with a feel centered around the mid/late 60s British Blues Explosion. This wasn’t intentional and happened organically as the recording techniques and sounds with which we wanted to paint, pushed the record in that direction.

We also wanted to keep the album constrained to a four piece, without additional instrumentation so it could be reproduced live.
The lyrics also depart from the ‘Blues’ norm and are written about people and situations we saw in that period.

Many of the tracks started with a riff and ‘Walkin’ Out the Door’ is no exception. Suzy started playing and the guitar just came naturally, informed by the groove. The build at the end happened during the recording process as much of the album was recorded live.

‘I Need A Light’ started with a bass riff and the more ‘major’ sounding scale that was used in the melody kind of told us it needed a slightly psychedelic sound and hence the harmony fuzz guitar in the solo. We love the Wurlitzer part on this, great work by Jonny.

We went through many permutations of lyrics to get where in needed to be in ‘You’re So Good For Me’. The solos really played off each other with Jonny really piling it on towards the end; the Hammond organ nearly caught fire!

The lyric of ‘Cry Over You’ really drove the melody and arrangement and used the guitar lines and chords to enhance its power.

Even though wrapped in a Texas Blues style wrapper ‘Say What You Want’ is a straight up protest song. Jorge Rossy comment on Steve’s groove: “That is one mean-ass shuffle.”

We love acoustic music and vocal harmony is something not found so often in the blues. ‘Blueberry Pie’ is just the two of us and was done in one take. Clean as a whistle.

Suzy is historically a folk singer and says she doesn’t do Blues, well ‘Guilty’ shows that she can and has been rightly quoted to sound like Dusty Springfield. The middle eight is Simon’s favourite bit of music on the album.

Every album needs an ‘Empire’, one take of riffing complementing the angry lyric… Yes, we were pissed off.

‘Don’t Get Me Wrong’ started life as a totally different feel and it was only when we came to record that we saw it as it should be. It features Simon on lap steel guitar. Guitar instrumentals are always fun and we wanted ‘Shimmy’ to reflect that carefree sixties vibe.

The final track ‘Thrill You’ is the sort of thing you would have heard in an American smoky blues club in the early 60s. Many reviews say that the guitar is inspired by BB King, but actually it was Peter Green to whom Simon tipped his hat…

The cover was shot by Suzy in the late 70s as part of her school photography project which she developed herself. It’s of her Grandma Betty who clearly was fed up of being photographed and a moment of joking was caught by the camera.

We were very fortunate to be able to get a hold of the perfect musicians for the album.

Steve Gibson (Van Morrison, Jack Bruce, Chris Farlowe) has known Simon for 25 years but only played in a band together briefly. He was the obvious choice on drums and percussion due to his blues credentials!

Jonny Henderson (Robben Ford, Matt Schofield, Otis Rush) was drafted in on Hammond Organ and Wurlitzer Electric Piano following a pretty intense search for the right guy and he fitted in perfectly!

And finally we have seen Danny Boy Sánchez play Harmonica at many a blues jam and loved his style and articulation!

What are your musical plans?

In the future, we plan to get back to touring in Europe and the UK on the back of the amazing support we have received from the worldwide Blues Radio and Magazine community!!!

We have also started to write and record the next album, which again will be based totally in the Blues.

Could the Valencia region be a new ‘Nashville’ for musicians in the future?

We loved the place and the Californian climate is very conducive to creativity. It’s also very inexpensive; this combination of factors could really make this happen with an influx of contemporary musicians from all styles and genres.

There needs to be some political will from the local Government to promote the region in this way to really make it happen.

You lived in the Valencia area for a good number of years. Where are you now?
We were living in Germany and we are now based in Portugal… and we have a new album out in April 2021 called ‘The Language of Curiosity’.
IF YOU PRE-ORDER ‘THE LANGUAGE OF CURIOSITY’ YOU WILL RECEIVE A FREE DOWNLOAD OF ‘LAY IT OUT ON ME’, ‘STONE COLD CRAZY’ & ‘CAN’T FIND MY WAY HOME’
More info:https://supertonerecords.com/artists