You are here: Home  /  Music  /  A HISTORY OF SPAIN’S SEPHARDIC ROOTS…AN ALBUM BY MARA ARANDA
Music 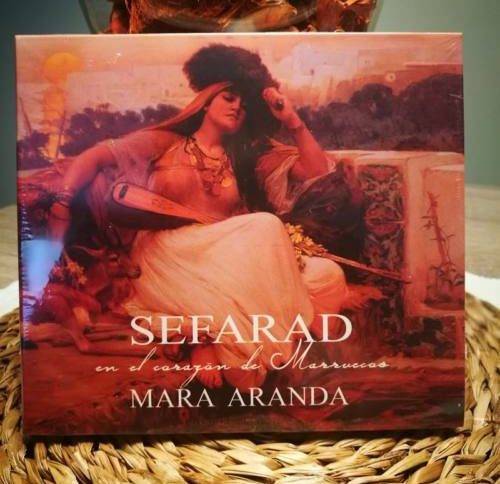 1. Tell us something about your musical background…
My experiences in music are many and diverse, given that they have been accumulated over 30 years of a professional career in music. I believe that destiny has led me to share experiences with musicians with whom I have had an affinity, on both a personal and musical level. I am drawn to music with traditional roots and medieval music and also researching music and linking it to history and heritage. The results have materialized into something like thirty albums, including collaborations with other artists and solo albums in my own name too.

These experiences have made me the woman that I am today, on and off stage. I have a sense of responsibility and duty towards the generations that will follow us, trying to involve and encourage them to respect tradition. Let us remember that the tradition comes from the Latin words ‘traditio’ and ‘tradere’ that means entregar in Spanish or to deliver in English. We deliver each generation that comes after, with that which we believe is truly worthy of being maintained over time. The teachers I work with share a large part of that responsibility. We make a real effort to preserve traditional instruments from our extensive collection, which number hundreds of musical instrumentos that are reconstructed from scrolls, manuscripts, stone carvings in facades of churches and cathedrals…

2. Where does your interest come from regarding the Sephardic history of Spain?
It most probably comes from my extensive interest in History. I am interested in the coexistence of many different cultures including Iberians, Celts, Romans, Greeks, Carthaginians, Muslims and Visigoths during so many centuries in major towns along the Iberian coast. This makes our genetic population a true melting pot of cultures. It is a proven fact that they mixed. For example, regarding the Muslim elites when they conquered parts of Spanish Peninsula in the 8th century, it is recorded that there were leaders that married within the elite of the already established Goths to increase their power.

There have been various genetic studies amongst the population of the Peninsula and it has been determined that a good percentage of the population on the peninsula today has Muslim and Jewish blood. Time and again, it has been written that the Jews and Muslims were all expelled and that there was an extreme ethnic cleansing. However, more recent studies show that genetically this was not the case. People changed their surname and imitated the customs of the rest of the population until their past was finally diluted. Some people make the effort to really discover their ancestral lineage, like in my case, but that is another story and will probably be a book one day…

3. Can you explain to us a few of the eleven songs on the new album, ‘SEFARAD in the heart of Morocco’
All the songs have been researched by the award-winning ethnomusicologist Susana Weich, for her work during more than 30 years ago on the Sephardic tradition and the Jewish diaspora. Dr. Jose Hinojosa Montalvo, Senior Lecturer of History at the University of Alicante, wrote the extremely informative booklet of almost 100 pages that accompanies the album.

El marido carpintero
According to Oro Anahory in the book ‘New Horizons in Sephardic Studies’ this song refers to the erect male sexual organ, unambiguously, leaving the song on the border between the polite and the brazen.

La partida del esposo
A traditional ballad. Much more known and covered is the one that was collected in the eastern part of the diaspora, adorned with an attractive melody. In this song, we can clearly see the influence of Arab scales in Sephardic music.

Búcar sobre Valencia
This romance presents a small part of the ‘Poema del Mío Cid’, describing the episode concerning the arrival in Valencia of Búcar ‘El Cid’ (from the dialect Arabic سيد sīdi, ‘lord’), the Castilian knight who conquered Valencia and established it as an independent kingdom in 1094. After his death in 1099, his wife Jimena Díaz succeeded him and inherited the rule of Valencia until 1102, when it went back to Muslim rule. This all inspired the most important epic song of Spanish literature: the ‘Cantar del Mío Cid’, with 3,735 verses.

La infantina
We are dealing with a romance that appears in 1550, in the first ‘Songbook of Romance ballads’ that was printed in Antwerp. It has been passed down the generations in Portuguese, Catalan and also in Spanish. It is one of the few romances that reflects on the very ancient beliefs about the mysterious, feminine, magical properties of trees…

Sol ‘la Sadiqa’
This narrates what happened in 1834, with the martyrdom of a Sephardic girl Sol Hachuel, in Fez, where she was beheaded for refusing to convert to Islam. She is considered a holy martyr of Judaism. Today it is a place of pilgrimage, in Tangier, respected by both Muslims and Jews.

4. What are your future plans?

My immediate plans are to finish the second installment of the Serphadic Diaspora. This time it will be dedicated to Turkey, collaborating with the Turkish Sephardim. We will continue to dive into the deep roots of this tradition and to bring to light unpublished themes or those that have been interpreted only sparingly.

Currently there is a kind of ‘boom’ with respect to Sephardic music but all the groups play the same 50 songs, the most popular and that in some way guarantees “the success” of what they present. However, I must insist that they assume the responsibility of taking this a step further and remove the somewhat superficial layer of this tradition and understand that underneath there is a very large repertoire waiting to be rescued. If we are not careful, the wind will blow and the melodies & lyrics could disappear into dust if they are not preserved. Respect tradition and tradition respects you…