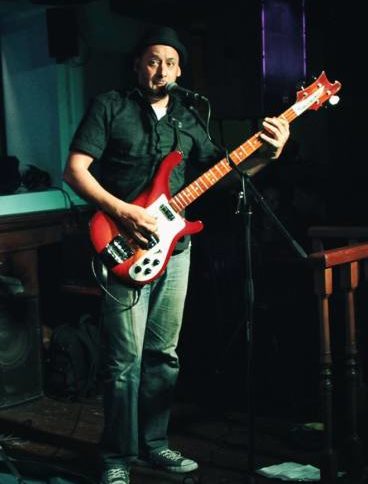 24/7 VALENCIA:Tell us something about your background and upbringing…

ADRI CASTELLANOS: I was born in Uruguay to a middle class family in the late 1970s. My parents weren’t rich but they decided that the best present they could give me was a good education, so that’s what they did and why I started learning English at the age of three. I attended one of the finest schools in Montevideo and people like the vice-president’s daughter were my classmates. I was supposed to become a big lawyer or someone like that. Dad never thought that I would discover the Beatles, The Stones or Hendrix when I was 13. That certainly screwed up his plans, as from that moment I just wanted to be a musician or at least an artist. I taught myself to play the guitar and formed many bands as a teenager. I studied advertising and I even got a job in an advertising agency. But one day I realized it was time to meet other people and places. So I decided to move to Europe.

How does living in Uruguay compare to living in Spain?

Uruguay is a lovely place to live, the weather is very similar to Spain, people are nice, food is amazing…try the steak if you happen to be there! Basically, the problem for me is that it was like living in Australia or New Zealand… wicked, but too far away! Here in Valencia, you can easily book a return ticket to any part of Europe for less than 100 quid and be there in a couple of hours. To get to Uruguay you need around 1,000 euros and 12 hours flying time. And don’t forget that Uruguay is surrounded by giant neighbours, Argentina and Brazil, so even to get to other South American countries, they are far away and expensive.

What differences did you find living in Liverpool and London during your time in England?

Both London and Liverpool are great places to live or at least visit; the difference is the size and the number of people living in there. I love Scousers; they are friendly, witty and have good taste (at least the Red part of the city – wink.) London is incredible, obviously one of the most important cities in the world, with great opportunities for artists in general if you can cope with the routine! But it’s the same everywhere, compare Montevideo and Buenos Aires, Liverpool and London, or Valencia and Madrid and the lifestyle is more laid back in the small cities whereas the big cities can be frantic.

Describe for readers your life as a gigging musician in Valencia.

It’s very exciting! But also very hard… especially in my case since I teach in the mornings and in the afternoons, combined with a few photo sessions per month and all the rehearsals and gigs with the different bands and duos that I have.

In order to play very often, it was necessary to have different projects. Later I also joined a blues band called ‘Nasty Boogie’, a household name in the local blues scene with two albums already released, in what seemed to be just a one-night substitution at the time. We had so much fun together that we played together and also started a 60s music band . Our show is a tribute to the Beatles and the Rolling Stones and other legendary bands from that era. I had a project called ‘SOLO STONES’ that does covers of Rolling Stones songs as well as a “60s British Invasion band” called ‘Brit Beat Incorporated’. We play regularly at Black Note Club!

I also play as part of many acoustic duos and trios because it’s not very easy to get gigs for bands. Little pubs and restaurants can’t afford to hire bands but on top of that, it’s difficult to get permits for live shows and neighbours usually complain about noise. Hopefully, the situation gets better. However, more recently, I am fortunate to be playing a lot of live music in Benidorm…