You are here: Home  /  Food  /  ‘HARD ROCK CAFE VALENCIA’ WILL COLLABORATE WITH ‘CASA CARIDAD’ ON THE OCCASION OF THE AMERICAN HOLIDAY OF THANKSGIVING
Food 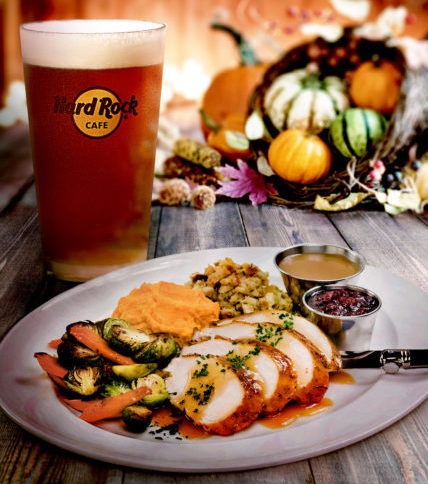 #Thanksgiving is a tradition in North America, celebrated in the United States on the fourth Thursday of November. The traditional and charitable menu will be available at Hard Rock Cafe Valencia.

From Thursday 25th to Sunday 28th, all Hard Rock Cafe Valencia customers will be able to enjoy this menu complete with main course, dessert and drink, and 10% of each menu will go to Casa Caridad Valencia.

The initiative has the collaboration of American Space Valencia, the Universitat Politècnica de València and the US Embassy in Madrid.

In addition, the traditional dinner on Thursday 25th will feature a live musical entertainment with Rock N Roll hits of all times.

From this Thursday (November 25th) until Sunday (November 28th), Hard Rock Cafe Valencia will offer the traditional THANKSGIVING menu, through which funds will be donated to Casa Caridad.

The charity menu features the typical dishes and flavours of the holiday: roast turkey breast served with traditional gravy and accompanied by classic stuffing, roasted vegetables, cranberry sauce and mashed sweet potato. To finish, the traditional pumpkin pie. 10% of each menu will go to support the work of Casa Caridad.

The menu will be available for both adults and children in its adapted version, starting on the fourth Thursday of the month as US custom dictates, from Thursday 25th until Sunday 28th. In addition, Hard Rock Cafe Valencia has the collaboration and diffusion of American Space Valencia, an organisation whose main objective is to promote mutual understanding between Spain and the USA, based at the UPV.

For his part, Luis Miralles , president of Casa Caridad has thanked this initiative that “shows once again the solidarity of Valencian society with this entity dedicated to promoting the reintegration of homeless people in the city, a situation that has worsened after the pandemic of COVID-19 and the economic crisis resulting from it”.

About CASA CARIDAD
Casa Caridad Valencia is a private charitable institution, declared of public utility, dedicated to solving the most basic needs of homeless people and those at risk of social exclusion. Its services currently include a soup kitchen, shelters, nursery schools, a personal recovery centre and housing and employment programmes, among others. The Association has its headquarters in Pechina and the Social Multicentre in Benicalap, as well as three Infant Education Centres (in Pechina, Benicalap and Torrent). Through these services, the Social Work department supports social reintegration through personalised monitoring. The entity, which in 2020 has assisted 2,500 people, also has the Fénix Project of supervised housing.