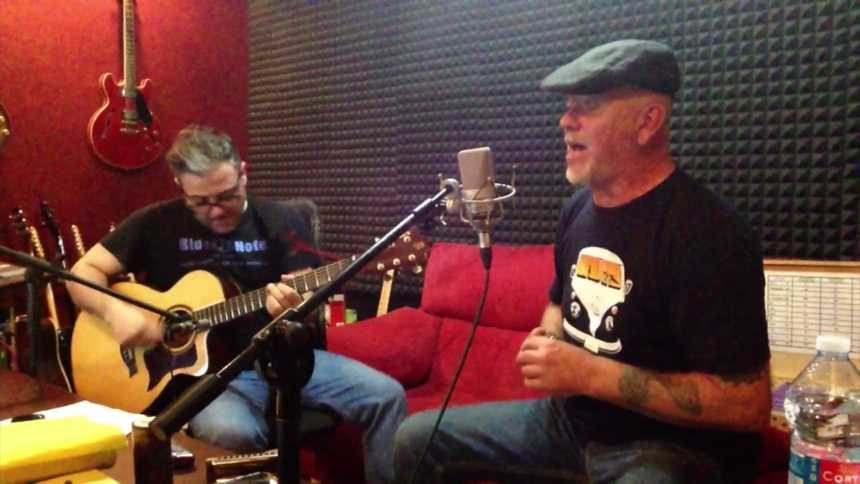 ##24/7 Valencia: Tell us something about your musical background and upbringing…

BUDDY PAUL: Hi, ‘24/7 Valencia’. First off, a big thanks for taking the time and interest to help keep the music scene alive in Valencia and Spain in general, nice one!

This first one is quite a biggy. I was born in East London in Stepney Green. Yeah, Cockney boy, lol! My father was a trad jazz slide trombonist in the style of Kid Ory from New Orleans. So, I was being dragged along as a baby to East End pubs and clubs, listening to jazz & blues from when I was born and obviously, it took its toll!

My father was obsessed that I play in his band to take on the Louis Armstrong part. Therefore, from the age of three or as early as I can remember, I was playing trumpet…at five years old I was playing in his band. At the time it was called the New Era Jazz Band with songs like “Tiger Rag”, “Basin Street Blues”, “St. James Infirmary”, “When the Saints Go Marching In” …and all that jazz. I think I was reading music at the same time. So, that’s where it began. Then for me it got weird, I was put in the British Legion Boys marching band and had the uniform with all the trimmings. Err, no, not for me, thanks, because the blues had already burnt my soul.

24/7 VALENCIA:How does playing and working as a musician in Valencia compare to London?

Before I started playing the London scene, I was a roadie for T34, a London-based rock band. I remember when I was an apprentice litho printer, I printed up a load of posters for the Monsters of Rock festival organized by the Hells Angels in 1980, I think. I had a great laugh, wild parties, got smashed with Lemmy from Motörhead and partied with Saxon, Praying Mantis and Scorpions.

Also, having a punky background, I did a stint as security for ‘The Dammed’; I think it was a GLC benefit gig. What a laugh that was, throwing punks off the scaffolding…oh, those were the days, ha-ha!

Then the blues overtook me. Back in the late ‘80s and early ‘90s, I started playing harp again with a few bands. The first one was ‘The Blues Devils’. Then I left and formed ‘Madhouse Blues ‘n’ Boogie Band’ with my friend Barrie Midford-Millership, from the ‘60s band ‘The Shamrocks’. With Rick Kane on keyboards from Doc K’s Blues Band, we were unstoppable. Barry wrote a great book all about the Fender bass and the blues scene called ‘The Mighty Hybrid and the Keeper of the Slabs’.
Then I hit the R&B scene and joined up with former Iron Maiden guitarist Bob Sawyer in a band called ‘Nitro Blue’s, playing Dr. Feelgood, The Doors, you know, rockin’ the hell outta everything… the guys were going strong.

I stopped playing for 25 years due to work, kids and an ex-wife that hated me playing music (hence the ‘ex’, lol!). One time, whilst rehearsing in Chelmsford in Essex, there was a knock at the door, I opened it and in walks Suzi Quatro: “Hey, who’s on the harp?” she said. “Well, that’ll be me,” I said. “Wow, nice harp, man!” she said. I nearly fell through the floor! She was HOT! Tight leather pants, high-heels, yeah! Rock on, Suzi! After that, I played a few gigs with her husband, guitarist Len Tuckey, quite a ride, really. I wouldn’t change many things in my life; it’s been a scream!

Here in Valencia, I hooked up with the Costa Blanca Blues network and we ran ‘Crossroads Coffeehouse Morning’, plus a matinee concert once a month where I tried to get different bands in from all over Spain. This network also opened doors up and I’ve been honoured and lucky to play with top American blues players like Gene Taylor from Kim Wilson and the Fabulous Thunderbirds, Paul Orta & the Kingpins from Texas and have interviewed many great musicians for CBBlues and blues fans everywhere.

The difference I have found here in Valencia is that the musicians are all at such a high level that it’s amazing. However, to try to keep a band together and have fun, the friendship, the comradeship, the closeness, the full rock ‘n’ roll attitude of all for one and one for all is just not quite where it’s at here. It’s more like a whole library of session musicians. Having said that, I have found this missing part with my band, a great bunch of fun-loving, talented, unselfish head-cases. So, we play the blues, we jazz, we rock, we funk it up, we ska, we love it. We’re musicians and love all music across the whole spectrum. THE BAND for all occasions, lol!

24/7 VALENCIA:What is special about the blues for you?

Blues for me is a way of life. No, it’s not depressing; it’s a celebration of times that you have come through, if you are here to sing about it. If you can make light of a bad time in the past through blues music, then you’re on the way home, you know. It always changes depending on your mood, the solos, the lyrics, the feel. It’s as free as you allow yourself to be. I’m a bluesman at heart, but I step in to the realms of other styles, we’re in Valencia, and it’s a party capital, so PARTYYYY and blues on!

24/7 VALENCIA:What was it like playing with the legendary pop star Rick Astely in the Valencia region?

Ah, the Rick Astley thing! Ha-ha-ha! I was in ‘El Lloc’ pub on Playa Pobla de Farnals. (We ran a jam every Sunday night there at 20.00h). A girl said he was staying in the hotel, 100 metres up the road, so I sent a message, “Hey Rick, fancy a jam? Come on down, lol.” .. and blow me, an hour later he walks in with the whole band. So I suppose we had to let him play! I’m not sure if he saw the message or it was a fluke but… we had a great night and the guys and girls were awesome. They had such a good time that afterward, we spoke and I arranged a special unannounced gig so they could come back. And they did. We rocked and we played all sorts with Rick and the band. Great guys, cools as hell.

It was a nice surprise to meet Rick and, just to let everyone know, Rick Astley is a great musician, an awesome singer and front man, down-to-earth and a wicked drummer and versatile as hell. We played everything from 80s hits like ”Never Gonna Give You Up” to AC/DC’s “Highway to Hell”, “Uptown Funk”, “Ain’t Too Proud to Beg”, “Sweet Home Alabama” and more.

Simon Taylor joined in, with his wicked saxophone, and we had one of the craziest nights we have ever had, so a big thanks for coming to play, awesome, anytime, and don’t forget Rick, if ya need a harp, let me know…

Cheers ‘24/7 Valencia’, thanks for your time! Big love to you all from Buddy Paul & keep it real!