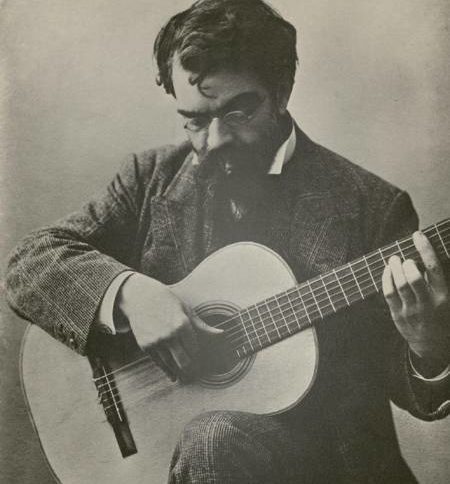 ORIGINS: “Tárrega was born on 21 November 1852, in Villarreal, Province of Castellón, (VALENCIAN COMMUNITY) Spain. It is said that Francisco’s father played flamenco and several other music styles on his guitar; when his father was away working as a watchman at the Convent of San Pascual, Francisco would take his father’s guitar and attempt to make the beautiful sounds he had heard.”

ACCIDENT: “As a child, he ran away from his nanny and fell into an irrigation channel and injured his eyes. Fearing that his son might lose his sight completely, his father moved the family to Castellón de la Plana to attend music classes because as a musician he would be able to earn a living, even if blind. Both his first music teachers, Eugeni Ruiz and Manuel González, were blind.”

BARCELONA: “In 1862, concert guitarist Julián Arcas, on tour in Castellón, heard the young Tárrega play and advised Tárrega’s father to allow Francisco to come to Barcelona to study with him. Tárrega’s father agreed, but insisted that his son take piano lessons as well. The guitar was viewed as an instrument to accompany singers, while the piano was quite popular throughout Europe. However, Tárrega had to stop his lessons shortly after, when Arcas left for a concert tour abroad. Although Tárrega was only ten years old, he ran away and tried to start a musical career on his own by playing in coffee houses and restaurants in Barcelona. He was soon found and brought back to his father, who had to make great sacrifices to advance his son’s musical education”.

ESCAPE TO VALENCIA: “Three years later, in 1865, he ran away again, this time to Valencia where he joined a gang of gypsies. His father looked for him and brought him back home once more, but he ran away a third time, again to Valencia. By his early teens, Tárrega was proficient on both the piano and the guitar. For a time, he played with other musicians at local engagements to earn money, but eventually he returned home to help his family.”

PATRON: “Tárrega entered the Madrid conservatory in 1874, under the sponsorship of a wealthy merchant named Antonio Canesa. He had brought along with him a recently purchased guitar, made in Seville by Antonio de Torres. Its superior sonic qualities inspired him both in his playing and in his view of the instrument’s compositional potential. At the conservatory, Tárrega studied composition under Emilio Arrieta who convinced him to focus on guitar and abandon the idea of a career with the piano. By the end of the 1870s, Tárrega was teaching the guitar and giving regular concerts. Tárrega received much acclaim for his playing and began traveling to other areas of Spain to perform. By this time he was composing his first works for guitar, which he played in addition to works of other composers. “

HOMESICKNESS: “In 1881, Tárrega played in the Opera Theatre in Lyon and then the Paris Odeon, in the bicentenary of the death of Pedro Calderón de la Barca. He also played in London, but he liked neither the language nor the weather. There is a story about his visit to England. After a concert, some people saw that the musician was in low spirits. “What is the matter, maestro?” they asked him. “Do you miss home? Your family, perhaps?” They advised him to capture that moment of sadness in his music. Thus he conceived the theme of one of his most memorable works, Lágrima (literally meaning teardrop). After playing in London he came back to Novelda for his wedding. At Christmas in 1882, Tárrega married María José Rizo. “

GUITAR & PIANO: “To enlarge his guitar repertory and, no doubt, to make use of his considerable knowledge of keyboard music, he soon began transcribing piano works of Beethoven, Chopin, Mendelssohn and others. Tárrega and his wife moved to Madrid, gaining their living by teaching privately and playing concerts, but after the death of an infant daughter during the winter, Maria Josefa de los Angeles Tárrega Rizo, they settled permanently in Barcelona in 1885.”

VALENCIAN PATRON: “Francisco Tárrega and María José (María Josefa) Rizo had three more children: Paquito (Francisco), Maria Rosatia (María Rosalia) (best known as Marieta) and Concepción. On a concert tour in Valencia shortly afterward, Tárrega met a wealthy widow, Conxa Martinez, who became a valuable patron to him. She allowed him and his family use of a house in Barcelona, where he would write the bulk of his most popular works. Later she took him to Granada, where the guitarist conceived the theme for Recuerdos de la Alhambra, which he composed on his return and dedicated to his friend Alfred Cottin, a Frenchman who had arranged his Paris concerts.”

SPAIN AND ABROAD: “From the later 1880s up to 1903, Tárrega continued composing, but limited his concerts to Spain. In 1900, Tárrega visited Algiers, where he heard a repetitive rhythm played on an Arabian drum. The following morning he composed Danza Mora based on that rhythm. In about 1902, he cut his fingernails and created a sound that would become typical of those guitarists associated with his school. The following year he went on tour to Italy, giving highly successful concerts in Rome, Naples and Milan.”

ILLNESS: “ In January 1906, he was afflicted with paralysis on his right side, and though he would eventually return to the concert stage, he never completely recovered. He finished his last work, Oremus, on 2 December 1909. He died in Barcelona thirteen days later, on 15 December, at the age of 57.”

MOBILE PHONE(!): “He is also the composer of ‘Gran Vals’, an excerpt of which was used in the iconic Nokia ringtone.”

VALENCIAN ROOTS: “Capricho árabe is the most popular work of the iconic Spanish guitarist Francisco Tárrega. He initiated the revival of interest in the classical guitar that had fallen out of fashion during the Romantic period. He travelled extensively throughout the country, exploring the folk traditions of different regions in order to create new aesthetics for the guitar music that remains relevant to this day. Tárrega wrote his ‘Capricho árabe’ in 1888 while staying in Valencia where Muslim, Castilian, and Christian cultures historically mixed. The following year, the piece was printed in Barcelona becoming his first published composition.”

TYPE OF GUITAR & STYLE OF PLAYING: “Tárrega’s guitar is from Seville and was made by Antonio Torres. The qualities of this instrument are key in the work Tárrega will conduct to find the sound and the style he wants in his compositions. During this period, he also abandons the piano in order to be more focused on the guitar. In 1902, Tarrega cuts his nails and thus softens his musical style, which makes it a major characteristic of his disciples. As a composer Tárrega was conservative, with a style similar to the general trends of the second half of the 19th century. A virtuoso on his instrument, he was known as the “Sarasate of the guitar”. Tárrega is considered to have laid the foundations for 20th century classical guitar and for increasing interest in the guitar as a recital instrument. Tárrega preferred small intimate performances over the concert stage.” ”

LEGACY: “Francisco Tárrega composed 78 original scores and 120 transcriptions – mostly for his own use. The composer and performer Tárrega is responsible for the golden époque of the guitar. His inspiring compositions ‘Recuerdo de la Alhambra’, ‘Danza mora’, ‘Capricho árabe’ have been adapted to the flamenco guitar and are also in the repertory of great flamenco artists. He is often called “the father of classical guitar” and is considered one of the greatest guitarists of all time.”