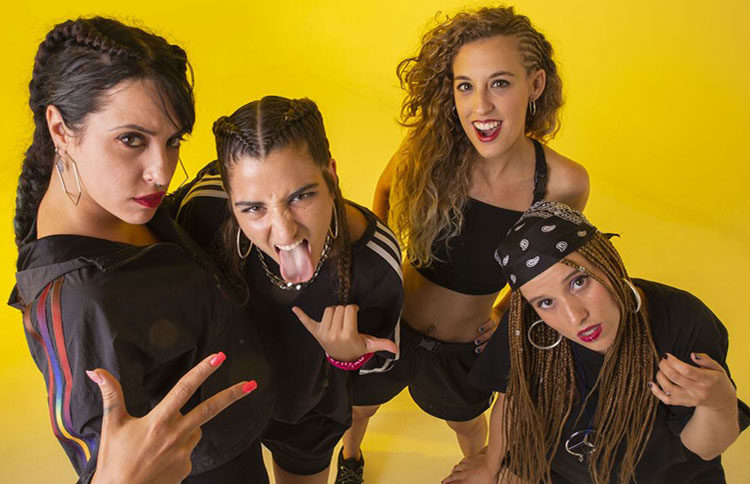 ##Maluks is a reggae, dancehall and cumbia group formed by four women based in Benimaclet (Valencia) : Núria Pons (vocals), Marina Bolea (vocals), Laura Honrubia (vocals) and María Deltell (DJ). In their songs, they deal with socio-political and especially feminist themes. in 2021, they have released a new album, ‘Som i vibrem.’

Maluks: “We wanted to start by making music that we would all like… we came up with a union of Latin music and Jamaican music (reggae, dancehall, trap, etc.). Our goal was to mix all those styles into one (laughs), that’s why our songs are not orthodoxly reggae or dancehall, but a fusion of all those styles that, in the end, complement each other and shape who we are. For all this we looked for a producer who knew about all these styles and had worked with them to be able to adapt our songs to the styles we wanted, and we found Oriol Puig.”

“I think we would all love to make a living from music and we see ‘Maluks’ as a long-term project. What happens is that, especially with the pandemic, things are so bad that you think: “I don’t know how far this project will go”. But for the moment we are looking at the short-term future and we are staying there. The idea is to continue as far as we can go and enjoy it at all times. May it last as long as it has to last! At the moment we are very excited because we have a lot of things to live for, but at the same time we know that it is a very hard road.”

“I think we are a group who like partying, dancing, having a good time, but also to mix that fun side with a social message. To be able to include our demands in our lyrics from the rage and everything we have inside of us, but in a constructive way. We are ‘Electro Tropical Feminists’.

“All of our references until very recently had been men or male groups. Since a few years ago, and following the feminist boom worldwide, more women have become visible who were already making music historically and who were not so visible. In addition, a new music scene has been appearing where women are the focal point of the group, and, therefore, we have more and more references and groups of women who make music. And our evolution has followed this boom of female artists worldwide. Because I think that, although before we already took into account the importance of feminism, now we read more, we listen to more things and we know more about this issue, and it is a movement that is permeating the entire social and artistic scene.”

“It seems that even the important issues go a little by fashions, by “booms”… But come on, in the end, feminism, although now it has been given a little “boom”, as it is something so deep-rooted and so important, I hope it is not temporary, like wearing bell-bottoms. There is a lot of work behind it, involving many people, and I hope that this will get through to the people and that we will all continue fighting, because there is still a lot to do. What I cannot predict is when the time comes to understand feminism in a natural way, to normalize certain things or when feminism will really be so integrated that people will not have to keep on fighting for justice so much….”

“Well, right now music also has a lot of power and then, apart from reading and educating yourself in feminism… but feminism really comes when, in some way, you feel it, and it is very difficult to tell a person who knows nothing about the subject to come read this…because they still have so much to feel or suffer to really realize how it is.”

“Our music is empowerment and dance… with a message.”