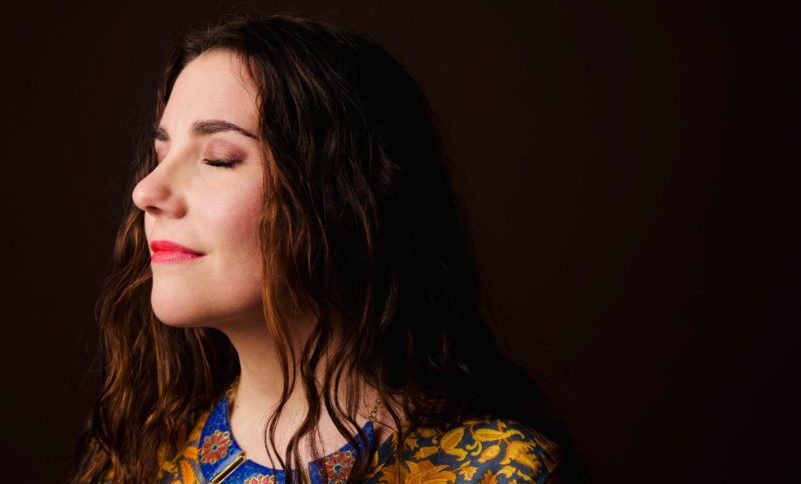 – The Valencian artist and the French pianist Baptiste Bailly, co-author of the project, achieve a unique and personal sound, in which the faces of jazz and popular music come together.

Efrén López, on oud, bandurria, mandolin, cistro, hurdy-gurdy and percussion; Alessandro Cesarini on double bass; Andrés Belmonte playing the ney and David Gadea on percussion complete the group, which performs in the space, located in the Cabanyal neighbourhood.

“Muerto de Amor”, the new album by the Valencian artist Elma Sambeat, is like a kaleidoscope in which each turn reveals a new bright and colourful image of the immense and unfathomable universe of Federico García Lorca. Album design is by Isaías Escudero.

The Valencian artist and the French pianist Baptiste Bailly achieve with 11 previously unreleased tracks a multi-faceted portrait of the work of the Granada-born artist in which the influences of jazz, popular rhythms and Spanish music can be heard to create a unique and personal sound.

“Muerto de Amor” opens on February 14th at 19:00h at the Teatre el Musical (Plaza del Rosario 3). Tickets are already on sale on the venue’s website. Sambeat will open up with a work in which she has used Lorca’s work as if it were an oracle: using his rhymes to connect with the spirit of one of Spain’s most universal artists.

“I would randomly open my book of the Complete Poems – where there are also all the loose and discarded poems -, I would read and let the rhythm of the poem itself suggest a melody, an energy. This pattern gave me many options while at the same time I discarded many others, and finally the most solid ones remained“, explains the singer.

In this game of mirrors and coloured crystals, “Muerto de Amor” manages to bring out the balance that Lorca’s universe achieved between the popular and the sophisticated.

“In my eyes Federico García Lorca was a very cultured, sensitive and refined man; but with a will to approach the things of the earth, of the people, of the people, and not on the basis of clichés but with all their lights and shadows. And in that I feel very much identified. That’s how I feel my own approach to popular music, to traditional music for example”, Sambeat explains.

Death, farewells, falling out of love, his homage to the gypsy imagination and even the surrealism of “Poet in New York” appear in this work where the most sophisticated metaphor goes hand-in-hand with the simplest and purest reference and where it is impossible to put labels on the sound style.

“For the first time I have given free rein to the emotional as a starting point without thinking about the vocal, letting each song ask for what it needs. The result speaks for itself, each song connects me with something deep that in turn connects with my aesthetic experience with Lorca’s poems. It is true that this project is difficult to pigeonhole, and I admit that this is deliberate. I have tried to look for Beauty with a capital ‘B’, beyond genres. And this has been achieved largely thanks to the work of Baptiste Bailly, pianist and co-creator of this project”.

“Siete gritos, siete sangres” is the opening track, a song based on the poem “Muerto de Amor” from the Romancero Gitano; “Algunas veces el viento”, the first song composed for this album and a track that oozes flamenco; “Yo quiero”, powerful and hypnotic; and “Donde los sueños gimen”, a clear homage to the writer’s grave, wherever it may be.

The exception to this album composed in Spanish is “Ao Longo das Ruas Infindas”, the only track in Galician.

“I thought it was a great opportunity to compose a song based on a Galician text, as it connected with my passion for Galician-Portuguese culture, fado… Besides, the song was extremely interesting as it talks about Galician emigrants in Buenos Aires, which led me to look for ideas in music from there, and to join this project to my other passion, Latin American folklore, especially from Argentina. So I asked Baptiste to listen to some very specific things, like the milongas camperas, or the compositions of Ariel Ramírez. As a connection with “Muerto de Amor”, I think it’s crucial in Lorca’s travelling side, since he was in several cities like Buenos Aires, Havana, New York, and he was able to empathise perfectly with that sense of uprooting and survival”, Sambeat relates.

“Muerto de Amor” was recorded and mixed at Millenia, the studio of the experienced Vicente Sabater, with whom Elma has worked before and who has seen her grow as an artist.

For the presentation concert, Elma and Bailly are accompanied by a solid team of experienced musicians well-known on the local and national scene, such as Efrén López on oud, mandolin, bandurria, cistro, hurdy-gurdy and percussion; Alessandro Cesarini on double bass; Andrés Belmonte playing the ney; David Gadea on percussion and the dancer Corea Mateu will bring movement, generating a connection with Elma on stage and a presence that completes the show. The sum of their talents ensures that Lorca’s kaleidoscope continues to surprise with its luminous games.

“For the album I have had other very special collaborations, such as the singer Carles Dénia, whom I admire very much; Belmonte on the flute; the cellist Alba Haro and the singer Tere Núñez, a friend of my soul. Roxane Arnal and Iván López have also participated in some of the choruses. I am extremely grateful for this great team”, adds Elma.

The album itself, considered a rarity for today’s generations, who have become fed up with just having online music, is also a small work of art from the brush of Isaías Escudero.

“I thought it best to offer a truly special object to whoever buys it. With its meticulous design, one illustration per song, with the lyrics and all the details. Whoever wants to buy it has that compensation. It is definitely not just a cardboard box. When I fall in love with a record, I want to know everything, what instruments they are, who plays them, the lyrics… the more information the better. And that’s what I wanted to offer, in these strange times… a little piece of beauty”.