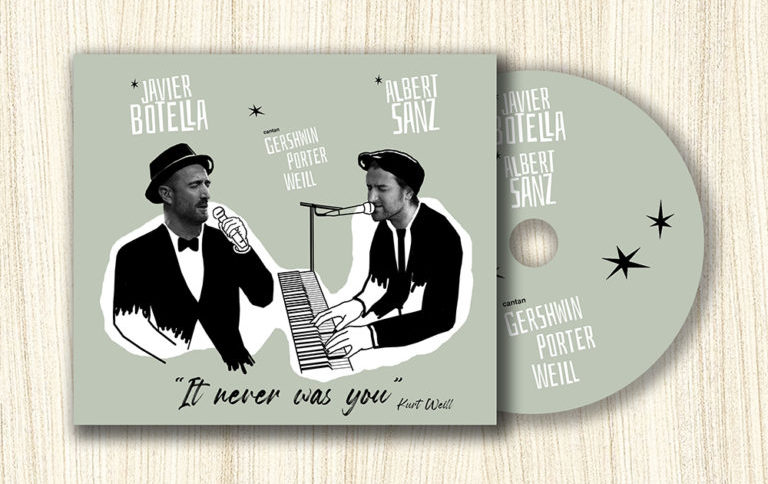 ##24/7 Valencia: Could you tell us more about this new project?

Javier Botella music representative: The Valencian artists Javier Botella and Albert Sanz are looking for alternatives to continue with their joint cultural project: to release a new album, ‘It never was you’, in 2021. After a musical project of micro-concerts at home, they are launching a crowdfunding campaign to raise 3,900 euros to release an album that includes a repertoire based on North American music and jazz standards from the golden age of Broadway.

In the last few weeks there has been an uninterrupted cascade of cancellations and closures, shutters or curtains coming down on cultural venues and events that have particularly affected the music sector. However, Valencian artists Albert Sanz and Javier Botella refuse to stop and have just launched a crowfunding campaign through the Verkami platform.

It’s time to reinvent themselves, culture doesn’t stop and that’s why these renowned musicians have joined forces to go ahead and release a new joint album in 2021. Under the title ‘It never was you’, they propose a repertoire with songs by the greatest exponents of Broadway musical theatre, and which revolves around the search for the original melody of the masters George Gershwin, Cole Porter and Kurt Weill.

For this new album, an exquisite selection of songs has been made in which the elegance and magic of Albert Sanz’s singing and piano playing, his freshness and youth combine perfectly with the more mature and velvety voice of Javier Botella.

The initiative for this project arose from the idea of seeking a new formula to bring music closer to the public, and after the difficulties in carrying out musical projects, as a result of the restrictive measures due to the pandemic, “it is vitally important to have contributions from patrons that make it possible to launch artistic quality proposals on the market that, otherwise, run the risk of not seeing the light of day due to lack of sufficient means to reach the public”, Sanz points out.

“This record is an enriching experience for our professional and personal careers, but also a stimulus for culture lovers, for the general public and to say that music does not stop”, says Botella.

The sponsorship project is carried out through the Verkami platform, with a system of rewards for contributions starting at 10 euros. All the support received will be used to cover the costs of recording, producing and distributing the CD.

The goal has been set at €3,900, an amount that does not cover all the expenses, but it is the minimum to be able to carry out this initiative and for ‘It was never you’ to see the light of day in the first half of 2021.

The rewards have been divided into advance digital download, physical CD, acknowledgements on social networks, including the name of the backer in the booklet that accompanies the CD, sponsoring the project by including the logo of the backer on the back cover of the CD, tickets for the presentation concert or exclusive concert in different formats, are some of the options available to contribute to the project.

An alternative to the wave of closures of physical spaces that forces us to look for new ways of continuing to connect with the public and to support culture, and especially the music sector.

All the information on this campaign is below. An alternative to the wave of closures of physical spaces that forces us to look for new ways of continuing to connect with the public and to support culture, and especially the music sector.