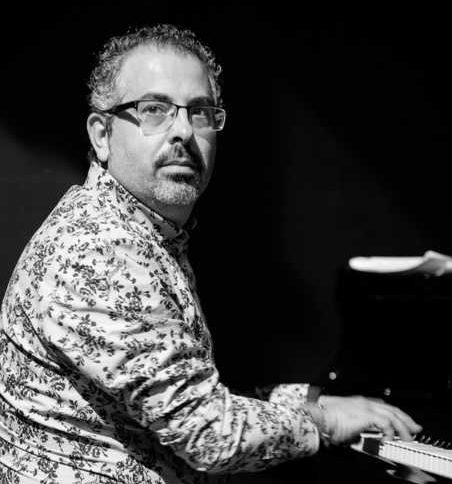 24/7 VALENCIA: Tell us something about your life and career as a musician.
PAU VIGUER: My grandmother had a piano in her house and I started studying the piano there with a teacher at the age of seven. There weren’t any music academies in Valencia at that time. So, the following year I entered the Conservatorio. After playing in various groups and orchestras, I finished my Superior (10 years of classical music studies) in piano and later studied jazz with Ricardo Belda in various seminars and with a number of great pianists, including John Serry (USA) and Vivian León (Cuba).

How do you find Valencia to live and play as a musician?
Valencia is an excellent city with a great climate and a lot of life and joy amongst its open fun-loving people. However, as musicians we run into many difficulties in playing here and trying to grow musically, too. The infrastructure of the local scene and official support is really minimal. Sometimes we play in really poor conditions and those who want to make a living from playing music often have to travel or go live elsewhere.

Tell us something about your album “Implosión”.
Implosión is an internal outburst of emotions about becoming a father. The result is the song comes out as a kind of furious Latin Jazz.

Blues for Lucia is inspired by Charlie Parker’s “Blues for Alice”, a piece I’ve played many times. It’s a powerful blues.

La Fiesta de los Niños is about the innocence of children and the affection it produces in us.

Bajarse del Burro is about our stubbornness in not recognizing when we are wrong. It’s a song in three sections influenced by the great Jorge Pardo.

La Muñequita Enferma relates my experience of the pain of being a father. I wrote the music and lyrics and the song is sung by the Cuban singer Katy Rodríguez. It’s a bolero-son fusion.

Sin Salida is a track about the anxiety we have when a difficult situation suddenly is on top of us.

Tú y Yo is dedicated to my wife and our happiness in being together.

10 Años Después is about my career in jazz, a career that is bringing me so much happiness and great experiences both musically and personally.

Tell us about some of your other albums…
My earlier solo albums are by the Pau Viguer Trio: I composed those three albums out of the need to express everything I was feeling in my life. Other projects focused more on featuring me as an interpreter with a tribute to my favourite pianists…

My latest album ‘My Favorite Things Piano’ arose from the need to transmit and find states of mind of tranquillity and serenity within a Western world that is increasingly busy and stressed. In this way, the compositions seek to generate that atmosphere through the melody as a provocative element, but with a harmony that reveals aspects of both classical and modern music, from the romanticism of Chopin to jazz and the synthesized sounds and rhythms of the 90s.

Pau Viguer combines his musical teaching with his participation in jazz and rock bands such as Babalú Swing Band or Jazzapp. He is also the leader of the Pau Viguer Trio, a group with which has released the albums ‘Paseo por la vida’ (2008), ‘Arena’ (2011), ‘Implosion’ (2013), ‘Muy delicado’ (2017) and the recent ‘Fahrenheit Degrees’ (2018).