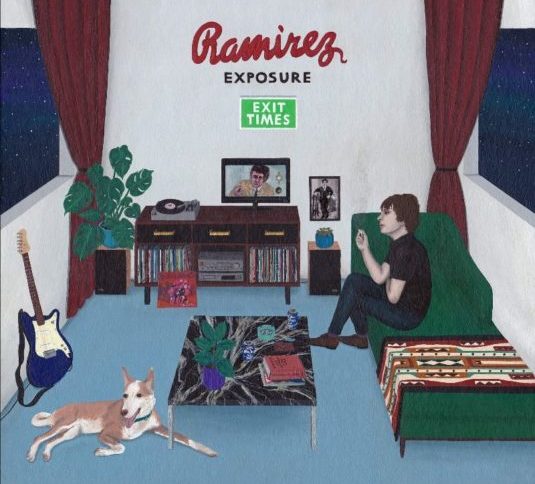 ##The Valencian musician’s third album is a hymn to hope in the “most senseless moment in global memory.”

Lovemonk Records: “Optimism is a contagious human quality. Even in the worst moments, you have to know how to get close to the sources of positivity: whether they are places, people or, as is the case here, records made by people who ooze an underlying optimism. Víctor Ramírez is one of those people, and Exit Times, one of those albums.”

The Valencian musician’s third album has something therapeutic about it. Built on harmonic vocal melodies that connect us with classics from the 60s, bright-sounding guitars and compositions full of personality, the album starts with brilliant sunshine-pop without fear of developing passages that go deep into psychedelic passages, which allow us to see life as its author does: as funny as it is tragic; like a Cohen brothers movie.

From that premise, Exit Times tells us about“a time of escape, of a leaving of sorts… of voluntary abandonment of certain paradigms and dynamics to which we would not want to cling to…if the frenetic pace of life allowed us to rethink them.”

Ramírez’s optimistic attitude transpires from every chord and beat of the album, like that sun that shines through any crack to illuminate us every morning with hope and powerpop. But it’s not easy to know how to laugh at yourself and your misfortunes, to find meaning in life when you discover that, in fact, it has none, or to trust that you’ll get somewhere when you take: “bridges and roads that lead nowhere” (he says in ‘Bridges And Roads’). The most important thing, no matter what, is to go in with your head held high because that’s the only way to know when and where the sun is going to rise (he suggests on ‘You’re Going Far’).

Recorded in Ramírez’s home studio, ‘Exit Times’ is a hymn to hope. However, the Valencian does not try to give universal lessons, he simply offers us small stories and personal reflections from his particular perspective. He talks about love with humility and self-criticism, without fear of ridicule, in the almost volatile ‘A Silly Ode To Serious Love’, and even with some humorous self-deprecation in ‘Dysfunctional Girl.’ Of accepting destinations we hadn’t planned and surprising paths to reach them in the mellow, placid and almost balladeer-like ‘Another Fool With A Good Heart’, as well as in the opener ‘Bridges And Roads’. Of turning the prosaic into ritual and the routine into ceremony in ‘The Rituals’. Of the ability to dream as a right and as an escape valve from demons in ‘Vivid Night Dreams’; and, in general, of the sort of post-drama peace, relief and joy of finding yourself in places, times and situations you don’t recognize. Or simply of feeling lost in the slow, spacey, dreamlike ‘Dalingeria’.

“Exit Times is a shiny collection of songs with a universal vocation, bathed in sunshine pop with touches of new psychedelia. All simmered under the Mediterranean sun, the same sun that illuminates the entire planet.”