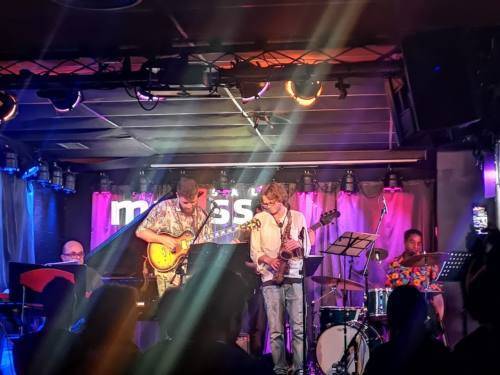 Tell us something about your upbringing and musical background…

I was born into a musical family and my dad has always been a serious jazz fan. So jazz was the first thing I heard and funk too, being born in 1975. I took up the clarinet aged 14 then the Sax. That was in Blackpool where there was virtually no jazz scene. However, I fell in love with jazz. I didn’t know what else to do, so i memorized the Charlie Parker ‘Omnibook’ in Eb and Bb and did the grade exams; it was either that or drugs/alcohol like everyone else my age at the time…it got me off the streets. I skipped A-levels, became a monk doing around 6/8 hours practice a day and got into to Music College at 17, passing with distinction. Then at 20 I did my final year at the Guildhall in London. That for me was my Olympic gold medal. London then was like heaven. I was propelled into the jazz scene professionally under the wings of great aspiring stalwarts of the music and other established names. At 25 I became a Professor at Trinity College of Music. The rest is history and I got to play with all the greats I grew up listening to.

What is jazz for you?

Jazz is love because music is love. It’s that simple; personal growth/self-discipline/lateral thinking/never-ending/ awe-inspiring compelling inspiration, a universal language. It’s home to me wherever you are in the world. The politics, the corruption, the hardships, the education is another matter.  At the core of jazz is love/God for me; the expression of the silent voice found in the heart – the spirit of the universe exploring a human experience. But it’s a genre of music which encompasses many other genres with mostly the notion; I dare you! So, it allows one to adapt to whatever the musical situation.

How does living and working in Spain compare to England?

So far I can only really speak of my experience of Spain being mostly in Valencia. The first thing that hit me was the audience. People love music here, it’s a cultural paradise, there’s an audience and they actually listen, appreciate you and clap! Valencia is also a melting pot of world cultures too. Musically, much of what’s happening around this embracing city is the result of this fusion from around the world and it is unique with such diversity! I must say there’s a very high level particularly around a Valencian organisation called ‘Sedajazz’ (an independent jazz college). The teachers there are doing everything right. The students going through them are so wonderfully supported by the city too. In comparison to Berklee, with all its power, money, American marketing etc; it’s so wonderful to see something native of Valencia that so gracefully holds the flag… just proving that money can’t buy everything. And this is thanks to the ‘hearts and no bullshit’ great players who help these young students. Musicians like Santi Navalón, Jesus Santandreu, Latino Blanco to name but a few are heroes to this city. It’s also great for me as their level is similar to the level I worked with in London; they’re great musicians because of their hearts!

Could you take us through each track on your album, ‘Trip Bop’

Trip-Bop is written as an opening piece for the energy of this ensemble, our influences and with space to evolve within the music.
Punk Kid, originally written in New York and recorded for previous album Plastic City, I rearranged to have a Miles Davis ‘80s’ feel to it.
Tutu and Backyard Ritual; two tracks from the Miles’ album ‘Tutu’. I’ve loved this ever since it was released in 1986 and it’s my homage to Miles. Blue Blood is a filthy slow rock blues inspired by many Wednesday nights jamming down the Black Note, which has been like a second home and school for me. Indigo is written for my partner Ellen, a spirited and adventurous piece much reflecting her and the influence she’s had upon me to dare greater. Harmonically complicated and full of surprises!

Tell us about the other musicians who feature on the album…

It took me a year and a half to find the right balance of musicians/temperaments. A band leader is a catalyst, an arranger, the music I write is for these energies/spirits combined. Valencian pianist Santi Navalón is truly a great musician with a deep knowledge of harmony, composition, jazz and rock; we both have the same passion for all of this. Peter Connolly, a rock/pop influenced singer and guitarist with a unique voice and beautiful feel on guitar, so mature for his age. Also with a hunger and openness to constantly learn and explore. I believe in him so much it’s great to give him a compositional vehicle to practice this. From Colombia, Ricardo Osorno has a South American feel to grooving on the bass. Likewise, he has openness to learning and practicing on the stage through the music with the freedom to dare to try things, 100% committed to every single note. Drummer André Walker from USA, a great feel, ears like a hawk, a musician who plays the drums. He is someone open to dare to explore. All of these musicians have a depth of history in their approach from their individual study, are 100% committed to every single note and are professional, punctual, studious, ambitious, open-minded, very serious, meaning they don’t turn up to gigs or rehearsals drunk or high – I got no time for that. I rehearse them with nothing less than how I’ve been taught in London/NY from masters I learnt from. To expect the highest results, is to keep everyone challenged, motivated and appreciated.

It has been said that trumpets are triumphant. What makes the sound of a saxophone so distinctive?

Do you have any plans?

Yeah, I aim to use this group ‘Trip-Bop’ as a medium, an instrument, to explore, create and demand but collectively among its personnel, to grow and enjoy playing and composing. Any opportunities to perform more venues, festivals I’m looking into and will greatly welcome. Other than that, I’m looking to re-establish myself as a teacher somewhere again; I’m currently looking for this. Also, I’m still learning this beautiful Latin language and culture and would love to explore the county more too. It’s been tough leaving England behind and adapting in many ways but I’ve been open and humble to that.  So, I’ve grown and I’m learning every day. But, like a band, it’s the people that make something come alive and joyful. I’m so grateful to all the wonderful people I’ve crossed paths with and those who are yet to come. Brexit broke my heart. I foresaw the repercussions it would have on the Arts & Education. But as in music or jazz, it’s what you optimistically do with a situation in a moment of time that bears fruit. All I did was apply jazz philosophy to life and thus enriched my life. So far, it’s been a Trip!

Could you tell us about your very latest album, ‘Sanity is not Statistical.’?

This was inspired by Orwellian ideas depicting a certain type of dystopia carried through to the year of 2020.

A journey through the mysticism of uncertain times, where, via a global pandemic we see the truths and flaws of capitalist governments as they cater for their interests only. Influenced by; David Bowie, Jean Michelle Jarre, Jan Garbarek & Miles Davis, this is a homogenous embodiment of work taking an eye-witness account of this year, a tale concluding in a truth towards ones’ happiness away from materialism or the physical realm.

An ancient Chinese Proverb said that ‘the wise are the children who know.’

During the year of 2020, we are all living with a measure of adversity unique to our experience. Though it’s not always the situation to hand, but one’s response to it which can adjust the experience of a matter. As oppressing as a situation may be, herein lies our freedom by mere choice. There is darkness and there is light. Any darkness can immediately disappear when light falls upon it. The children who know, are the children of the light. Light is love and love is kindness and charity, goodwill, non-judgement; it’s a simple action of choice to oneself and/or others. This music in particular is not about licks or tricks, but a simplicity, an expanded space forged through soundscapes and over-layered rhythms. Maybe it is to find the silent voice of one’s heartbeat’s groove… as we can all choose to distinguish ourselves from alternative realities.

I truly hope you enjoy this work as much as I have in its process, and thank you so much for listening.