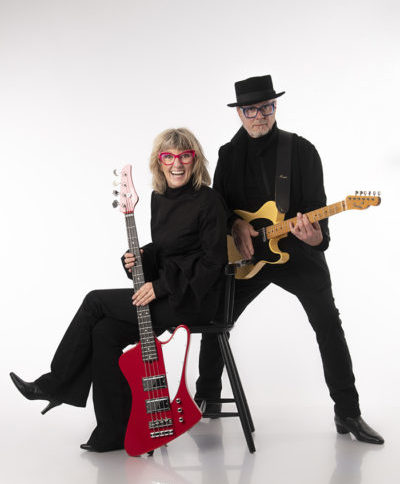 ##Starlite Campbell Band’s latest album has just been released and is called ‘The Language of Curiosity’, which is is the second LP by the husband and wife duo. They were based in Valencia for a number of years, regularly played live in the Spanish city and their renowned and state-of-the-art ‘Supertone studio’ was based in the Valencian region too.

Formed in 2016, the band is Suzy Starlite and Simon Campbell. They originally met after Suzy was recruited for Simon’s former band and fell in love whilst playing on stage, revealing that music is at the forefront of their love and marriage.

Both Starlite and Campbell can sing lead and backing vocals for their songs and they also play a variety of quality instruments. The bass guitar and piano are just two of the various instruments that Suzy Starlite plays. A veteran session musician and producer, Simon Campbell plays and records with a range of different guitars from his impressive collection of vintage guitarras, both electric and acoustic.

The band has British blues influences including Peter Green’s Fleetwood Mac and are also inspired by British 70s rock that developed from that late 1960s scene. They have become known for their distinctive sound (meticulously recorded with plenty of analogue equipment) and unique songwriting that deals with a wide range of themes…from fleeting romances to lying politicians!

Their debut album, ‘Blueberry Pie,’ was released to a good number of positive reviews and it received a nomination for Best Album in the European Blues Awards. As a result, the album, ‘The Language of Curiosity,’ is being heavily anticipated by the band’s international fanbase.

The band have three singles out from their latest album. These singles are ‘Stone Cold Crazy’ and ‘Lay It Out On Me’ and ‘Gaslight.’ These singles are shown to be heartfelt and honest responses to issues concerning the personal and the political, revealing experiences from a couple who have really travelled far and wide over the years. Indeed, in the last decade they have lived in England, Spain, Germany and are currently based in Portugal.

‘Gaslight,’ is the third single that is about to be released from the album. It was written with the intention to “cleanse the soul” through truth-telling. The lyrics of the song are a response to those who hide behind their lies via fake news, gaslighting the facts and disguising the truth. By calling out those who lie, the song aims to put out some positivity into the world through its lyrics.

The second single which has been released from the album, ‘The Language of Curiosity,’ is ‘Lay It Out On Me.’ The song uses Starlite Campbell Band’s typical British blues sound but as a ballad of sorts…

An interesting non-album track you can find on youtube from Starlite Campbell Band is ‘Can’t Find My Way Home,’ which differs from ‘Gaslight’ in that it is more mellow, shown through the folk guitar & acoustic bass arrangement. The music video for the song captures its essence, with a simple campfire setting creating a sense of warmth that allows the audience to appreciate the purity and heart of the song. As they explain: “Can’t Find My Way home was a cover of a Blind Faith song written by Steve Winwood that is not on the album – we just released it after the first two single releases as it felt fitting for the time during lockdown and we were delayed in finishing the album as our session drummer was in the UK and we were in Germany.”

Overall, the album has been described as, “Like looking at different sides of a Rubik’s cube.” In regard to the album’s sound, Suzy Starlite and Simon Campbell also took inspiration from the 1970s to create a feel-good album that addresses current real world issues of the 21st century. The twelve songs have different vibes and feels but it sounds like a unified album in terms of its sound and overall concept…rather than just a random collection of songs.

Aside from releasing three singles ahead of the album, there will also be an album launch party in Putney, London. Here, fans will be able to get an exclusive listen to the rest of the songs from the album. To then celebrate the official launch of the ‘The Language of Curiosity,’ the Starlite Campbell Band is set to head out on a European tour. They will be heading to Birmingham, Bury, Germany, the Netherlands, Portugal and the Czech Republic and possibly more countries.

There are more dates yet to be confirmed! The ‘24/7 Valencia’ team are hoping that ‘Starlite Campbell’ band will return (home) to play in Valencia again soon! Suzy and Simon told us: “We will be playing in Valencia as one of our session keyboard players Gabriele Del Vecchio (Los Perros Del Boogie) is playing on the new album alongside drummer Steve Gibson and Hammond player Jonny Henderson and Gabriele lives in Valencia! We have been looking at booking Spanish dates for 2022!!”

Starlite Campbell Band’s latest album is also available for pre-order via their website, either as vinyl and a download or a CD and a download: https://shop.starlite-campbell.com

GUITAR SPECIFIC INFORMATION
“On this record, Simon Campbell used two ’60s VOX AC30’s principally for Tremolo and the solo sections of ‘Lay It Out On Me’ and ‘Said So’. plus Germino Classic 45 and Club 40 (Marshall JTM45 clones) though a Germino 4 x 12 loaded with Celestion G12M heritage – a classic British setup to be sure!

Favourite studio amp is the Tweed Deluxe Speed Shop 5E3 clone which was all over ‘The Language of Curiosity’ and their first album ‘Blueberry Pie.’ They used their very own Supertone / Germino Vibrato and Reverb King (clones of the ’50s brown Bandmaster and blackface Pro Reverb respectively) plus the very fierce Supertone Matamp 120W on Hammond Organ, bass and guitar. Quite a mix!! Microphones on guitar amps were single Royer R-122 and on acoustics Schoeps Colette (CK4) and Flea 12.

“Lay It Out On Me’ featured the MIle Lull M4V and is a beautiful example of the tonal qualities and elegance that really shines through in such a naked and exposed soundscape.
It was interesting to discover which bass guitars didn’t respond as well tonally when recording using a DI (used for isolation when tracking with the drums). The Lull MV4 and Fender Precision are absolute perfect workhorses for studio and live.”