’25th VALENCIA JAZZ FESTIVAL’ FROM JULY 2 TO JULY 31!
WILL ‘GATTUSO’ HAVE THE BITE TO BRING TROPHIES TO VALENCIA?
OUIGO opens today the sale of tickets to travel between Valencia and Madrid from €9 from 7 October!
SEEKING OUT ‘RUZAFA’ IN VALENCIA
VEGAN & WHEAT-FREE ‘SPANISH TORTILLA’ BY HELEN WESTWATER OF ‘LA OLA FRESCA’

You are here: Home  /  Places  /  VALENCIA…STATION TO STATION
Places 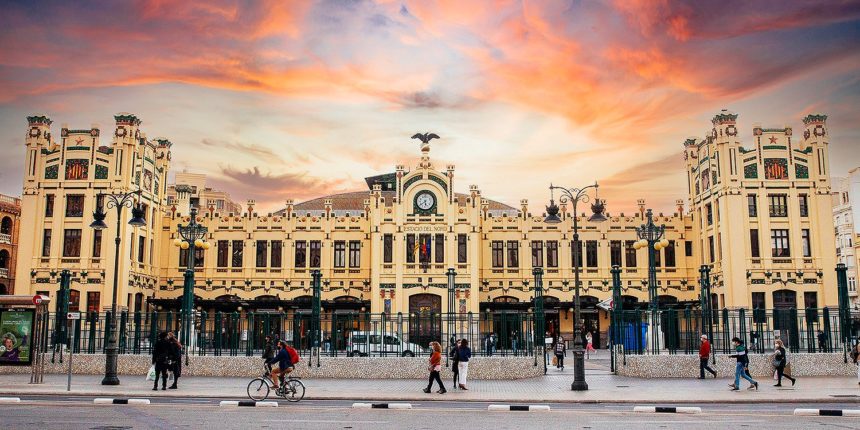 ##There is something magnificent and Jules Verne-like about old mainline railway stations that their clean-lined, concrete & glass modern counterparts can never quite recapture…however beautifully designed. The ultra-fast AVE (Alta Velocidad Española) train arrived in Valencia at a purpose-built station in 2010. As Valencia advances into a new age of high-speed rail links, underground tunnels and metro systems, the grand old ‘Estación del Norte’ is beginning to look more and more like an obsolete museum piece.  But as a monument to Valencia’s Modernist past and the top-hatted gentlemen who dreamed of bringing Valencia into the modern world of the twentieth century, it’s well worth preserving.

The Estación del Norte was a replacement for the first mainline station in Valencia, which had been built and designed by the British company Beatty and Shepherd (now Balfour Beatty Engineering) in 1850. It stood on what is now the Plaza del Ayuntamiento, more or less where the Telefonica building is today, with its tracks squeezing through the old medieval city walls, which were still yet to be demolished.  The British were soon bought out by Valencia’s very own Andrew Carnegie-style industrialist, the first Marques de Campo. Along with some other bewhiskered big nobs of nineteenth Century Valencia, he set up the Compañía del Norte and started work on the first railway lines out of the city. They had big plans and, in 1906, the old station was demolished and replaced by the present day one.

The building of the new station, along with the demolishing of the medieval walls and the spread of the city to the south and west, was a sign of Valencia flexing its muscles in an attempt to lose its provincial tag in favour of a more cosmopolitan image. The idea of opening itself up to the world was pushed along by Valencia’s ambitious larger-than-life mayor, Cirilo Amorós. This was a time when the new central post office was also built and the port was being improved and expanded as a motor for business, sending Valencian goods out to the rest of Europe and putting the city firmly on the map.

The original plan was to build the station on the Gran Via, close at hand to the Mayor and his cronies… these Cánovas folk always want everything right on their doorstep. However, it was decided that this was too far from the city centre and instead the busy Calle de Jativa which followed the route of the now demolished walls was chosen, much to the dismay of the citizens of Ruzafa who didn’t want the dirty iron beast to pass so near to their houses. The owners of the bullring also complained that the building work would affect trade. But there was no stopping the dreams of the powers-that-be and work went on regardless. Ruzafa was rewarded with new housing developments and plenty of jobs for its residents.

Despite the desire to show how worldly and cosmopolitan the city could be…the station designers (like many Valencians who get misty-eyed over the thought of women with metal combs in their hair collecting oranges in their frilly aprons) couldn’t resist the temptation of making the whole thing a modernist celebration of all things stereotypically Valencian. Flat and long like a rural “Masía” (farmhouse), the building is painted tobacco-stain yellow with stucco motifs of orange branches and folkloric scenes from the Valencia huerta both inside and out. Above the front entrance are two mosaics of Valencian women dressed like falleras lolling about in the countryside and (weirdly) a couple of naked cherubs playing with some dangerous-looking railway equipment.

Inside, the station is bursting with Art Deco modernist touches like the goldfish bowl lamps hanging from ornate, iron branches. The wood-panelled entrance hall has ceramic signs wishing passengers a pleasant journey in ten languages including English, Arabic and Japanese (but not Valenciano!) and a row of wooden, confession box-like ticket booths. Ceramics and ironwork are everywhere, with the old station bar particularly plush with its idyllic scenes from Albufera. One thing is missing though, the sea. No anchors or boats not even a few fish amongst the rice fields and orange trees. A classic example of Valencia living up to its image as a city with its back firmly to the sea.

The huge roof covering the platforms has some nifty iron work (they just don’t rivet & weld like they used to, do they?) with a ventilation strip down the middle, to let the steam and smoke out. There are two large twenty-four hour clocks moulded into the pillars. The five-point star of the Compañía del Norte is also everywhere, giving the place a bit of a feel of Soviet architecture amongst all the showy modernism, something Franco and his mates later obviously failed to notice.

With all the comings and goings it has seen over the last century, the station, like any of its type, has become part of countless memories. George Orwell in his book ‘Homage to Catalonia’ talks of spending a sticky, uncomfortable night stuck on a train at Valencia’s Estación del Norte during the Civil war. When the treasures from El Prado museum were sent to Valencia, to keep them out of the hands of Franco’s advancing armies, they arrived here by train. The station is also the classic place to arrive in Valencia during Fallas. Just walk out the front and you’ll be right in the middle of a marching band and within easy hearing distance of the Mascletá. But it´s obvious that the station is now starting to look like it has outlived its purpose. It’s too small for the new high-speed lines, there’s nowhere that comfortable to sit and it’s cold in winter and boiling hot in summer. Beautiful but unpractical in the 21st century.

The VALENCIA JOAQUíN SOROLLA STATION ( High-speed AVE from Valencia to Madrid) is competitive with prices with the airlines and they even claim it is cheaper than going by car, especially if you book well in advance. Pretty expensive for a family but doable if you’re pushing the boat out for a once in a while night out in Madrid, or a trip to the theatre or the museums. The whole thing is, of course, aimed principally at business folk and perhaps for the first time the idea of living in Valencia and working in Madrid becomes a possibility. Also, those hundreds of thousands of Madrileños who spend summer at the beach in the Valencian region now have another option to avoid the legendary August traffic jams. Valencia is arguably looking more towards the sea as many Madrileños possibly see it as their gateway to the beaches.  While the grand old station will stand as a monument to the past, canny Cirilo Amorós finally got his wish of having a station quite near the plusher parts of the Gran Via. 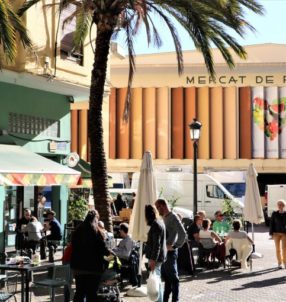 SEEKING OUT ‘RUZAFA’ IN VALENCIA