You are here: Home  /  Places  /  CHILL OUT AT THE EMBLEMATIC ‘CAFÉ SANT JAUME’
Places 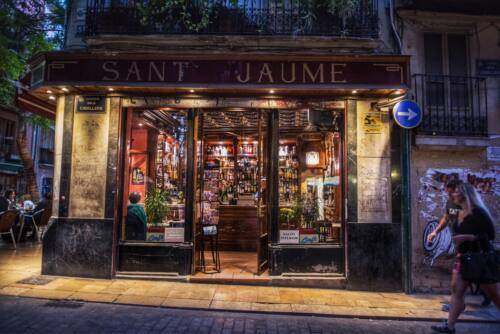 CHILL OUT AT THE EMBLEMATIC ‘CAFÉ SANT JAUME’

Without doubt, ‘Café Sant Jaume’ is one of the most emblematic coffee bars in the whole of Valencia. It was originally a pharmacy that began its trade in around 1900 so it has a very rich history! In 1984, it was acquired by current owner Vicente Mas, a kindly presence here & who you will often find behind the bar. Amongst his loyal staff is Concha, who has been working here since those: “…heady days of the 1990s where everyone knew each other in the barrio”. She also tells us that:“…we do the best coffee in town and our espressos have the Italians coming back, time after time.”

Loved by locals and visitors alike, both Concha and Vicente have seen a good number of familiar figures pop by incognito to Café Sant Jaume…to chill out on the delightful terrace with friends or have a chat at the bar. These include the actor Keanu Reeves as well as the legendary Catherine Deneuve, during her stay for the Mostra film festival. The world famous Spanish pop singer & actor Miguel Bosé and his extended family have also spent time here. Local lads made good, the renowned painter & sculptor Miquel Navarro sometimes drops by as well as the designer and enfant terrible Javier Mariscal.

Hispanophile and author Jason Webster has been spotted here. His work includes a series of crime novels set in Valencia that could perhaps make a great film one day! Hollywood, are you listening? Talking of cinema, ‘Café Sant Jaume’ has been used for the setting for a scene in the erotic drama ‘The Garden of Eden.’ It is a film based on a novel by Ernest Hemingway, a writer who visited and stayed in Valencia many times. The café-bar was also featured as part of ‘La gran aventura de Mortadelo y Filemón’, which is a surreal film based on the famous comic-strip adventures of the mythical pair. Indeed, there’s a timelessness about this café-bar that has made it the backdrop for all sorts of video & promo clips over the years.

The local cocktail ‘Agua de Valencia’ is one of Café Sant Jaume’s specialties…with a secret formula that makes it unique in Valencia! They also serve sangria and they have a wide range of gins, whiskies, brandies, beers and coffees to enjoy too. This is the real Spain, in the heart of the historic centre, with a terraza that is great for watching the world just stroll by…