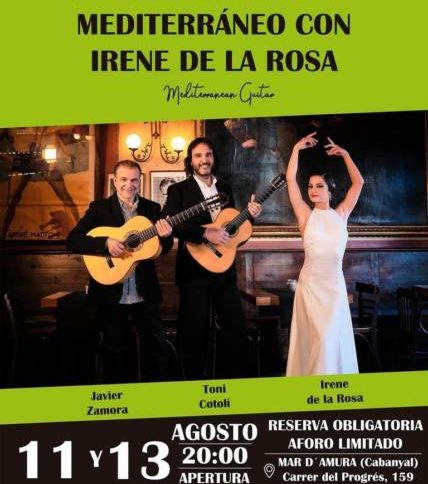 24/7 VALENCIA: Tell us something about your background  and musical education …

TONI COTOLI: I was born in Valencia in 1974. At nine years of age I started my musical studies at the ‘Unión de Pescadores del Cabanyal’ Musical Society, where I played the clarinet. At sixteen, I exchanged the clarinet for the guitar, beginning to study at the Joaquín Rodrigo Superior Conservatory in Valencia. After gaining a degree with Honours and the ‘Euterpe’ Prize for music 2002 of the Valencian Community, I went to study in Germany at the Robert Schumann Hochschule in Düsseldorf. I later studied a Masters of Musical Interpretation at the University of Cáceres, directed by the prestigious guitarist Ricardo Gallén. Parallel to my “classical” studies I have studied electric guitar (rock, blues, jazz), flamenco guitar and also Bossa Nova guitar.  I’m interested in all styles, and apart from my 6 edited CDs of classical guitar, I have recorded some CDs and cassettes with several local rock bands.

Explain your love for the Spanish guitar
My love is for music in general. Growing up, a lot of music was always being heard around the house. I remember playing my records on my father’s turntable, as he taught me to put the records on when I was very young. I also started to play the piano for a while. But the guitar has something special in its sound, in the touch with the strings, which can be magical. Simply touching ‘la guitarra’ brings me happiness. I’ve never stopped playing the guitar since I discovered ‘ella’. Finding new repertoires, new sounds, techniques … I love it. Life without music and without the guitar would lose a lot of sense to me.

What is the difference between the power of classical music and the power of popular music?
For me, the difference is basically that the melodies of popular music are known to everyone, so they tend to reach the public more easily. When I play a famous cover version like ‘Bohemian Rhapsody’  people get very excited…see https://youtu.be/_NH-a_-a26Y. And yet if I interpret a classic piece of the same musical value, if it is not so known, it is much more difficult to light up “the soul” of the public.

Could you tell us something about your last album?
My latest album is called ROCK road, and I would define it as the rock soundtrack of my life. My students are to blame for this CD, because they are always asking me for arrangements for the classical guitar of rock themes … and they eventually asked me to record a Rock CD! So, I made a compilation of the great themes of rock history that I liked.  I also included some more current tunes that they asked me for during classes. They are all adapted to the classical guitar. The album includes versions of bands like Queen, Scorpions, Guns’N´Roses or Metallica and more current bands such as Passenger, Imagine Dragons, Keane or Hoobastank. Click on this video for a sample: https://www.youtube.com/watch?v=zTgn-k_AjpU&t=3034s

Can you tell us more about your residence at ‘Mar D’Amura’
Recently, I created a project called ‘Mediterranean Guitar’ that we are presenting at Mar d’Amura del Cabanyal every Wednesday with different shows. ‘Mediterranean Guitar’ is a group of Valencian artists that encompasses different disciplines and styles, fusing our art and instruments to create original shows. From flamenco to  Classical Music to Rock.  We have been working together for more than ten years. Javier Zamora (flamenco guitar), Irene de la Rosa (dancer), Gloria Aleza (cello) or Eva Dinora (voice) … and we are offering concerts on both national and international stages.

What is Mediterranean music?
For me, Mediterranean music is music created and performed in the Mediterranean and is a fusion of many different styles. Many times I have been classified as a “Mediterranean Guitarist”… so I have finally adapted myself to that description. I like it. My guitar is influenced by the different languages ​​and styles that make up Valencian culture in general. From the popular guitar, the classical guitar to flamenco. I don’t know if it is etymologically correct, but it is what I feel.

What are your musical plans?
Right now my plan is to keep playing rigorously. We have a full live agenda programmed until the end of the year! And, of course, to continue exploring new musical paths…you never know just where they will take you. I love learning new things. On the way, I plan to record a music video with one of my groups ‘ROCK ROAD TRIO’. I also plan to record a new album (this time in digital) that is also a cover versions experiment. Finally, i have a new project with ‘Guitarras del Mediterráneo’ that features Irene de la Rosa and Gloria Aleza.

For more information about Toni Cotoli (in English) go to these links: