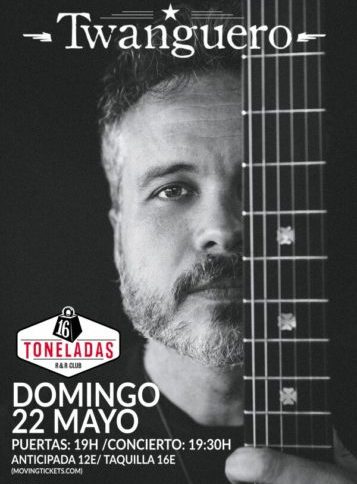 Born and bred in Valencia and winner of a Latin Grammy, Diego Garcia a.k.a. ‘Twanguero’ is regarded as one of the best guitarists in the world. He returns to Valencia to play ’16 Toneladas’ on Sunday. El Twanguero is a tireless traveller and a unique guitarist. This Valencian who lives in Los Angeles makes his way following his instinct and moving away from the conventional. That restless spirit led him five years ago to swap Madrid for California and now takes him to the jungle. This is the new chapter of his guitars of the world project Secondary Roads, which began with a journey through North America in search of blues, country and ragtime, and now continues with a second volume recorded literally in the jungle of Costa Rica. He continues his incredible journey with the Spanish guitar, a musician who won a Latin Grammy for his work with Diego El Cigala and who has played with Bunbury, Calamaro, Rafael, Camilo Sesto, Fito Páez, Juanes and Santiago Auserón. The inspiration for this ‘Carreteras secundarias Vol. 2’ is a repertoire that includes Latin American sounds and rhythms (with nylon strings, nothing electric), echoes of milonga, samba and zambas. Although it carries over the influences of blues and ragtime from Volume 1, which was a journey through North America, this Volume 2 travels South but brings in things from the North.The jungle is, for now, the last stop on the journey of El Twanguero, who in the past has already recorded projects with tango in Buenos Aires, flamenco in Madrid, and he has also spent some time in New York.

24/7 VALENCIA: Can you tell us something about your life in Valencia and Madrid as a guitarist…

TWANGUERO: In Valencia I had a brief career, as I moved to Madrid very young. Even so, I played a lot on the circuit of the Comunidad Valenciana… both with my band Los Be-Boppers and with other projects related to the style I liked at the time (Rock n Bordes, Galloping Guitars). But it was really in Madrid where I was able to go on the big tours with artists such as Santiago Auserón, Diego El Cigala, Andrés Calamaro, Manolo Tena, Jaime Urrutia and more. It was a big step to move to the capital because, at that time, there was a lot going on. I worked from Monday to Thursday at TVE, playing on a television programme, and at weekends I went on tour. That’s how I spent many years and it was really a great learning experience.

24/7 VALENCIA: What are your musical influences?
My musical tastes have always been very eclectic, because since I was a child I was trained to be a musician without specific genres. I don’t consider myself a lover of rock, blues, jazz or any particular style, but I do love the music of the Rolling Stones, BB King, Camarón de la Isla or Miles Davis. In general, any music that can move me.

24/7 VALENCIA: You have travelled a lot as a musician. Which countries have had the greatest impact on you and why?
As a musician, the most impressive is of course the USA, far above the rest. This is because there are communities of musicians of all nationalities and that undoubtedly helps the level to be very high. Of course, you can find wonderful music anywhere in the world. Argentina, Cuba, Brazil or India are countries with an incredible wealth of music. However, the reality is that where there really is a strong industry is in the USA, and I have experienced this especially during the pandemic and specifically in California.

24/7 VALENCIA: Tell us something about the records you made in Argentina and the United States…
‘Argentina Songbook ’ was my duets album. I was living in Buenos Aires for a while and I wanted to make a diary of my Buenos Aires experience with friends like Bunbury, Calamaro, Fito Páez or Diego El Cigala. In the USA I recorded ‘ELECTRIC SUNSET’ which is a tribute to East Los Angeles where rockabilly and cumbia become Cumbiabilly.

24/7 VALENCIA: What is the concept of ‘Carreteras Secundarias Vol 1 & 2’?
Volume 1 portrays North America by car. It’s a road trip I did for the first time in 2011, from Chicago to Patagonia, with just the company of my guitar. I wanted to delve into American roots styles. Volume 2 is an offering to the Central American jungle that gave me this wonderful gift that is the guitar. It is like giving back to the trees that sacrifice, in the form of music.

24/7 VALENCIA: As a musician, what is the difference between living in Los Angeles and living in Valencia?
It’s a huge difference, even compared to Madrid. During the pandemic I realized that moving to Los Angeles was the best decision of my life, because there was never a lack of work here. All the studio sessions I had been doing for the last few years literally doubled during 2020. Obviously it was hard in other ways, but I think you have the best quality of life when you can do what you love and not get stuck with your goals. That’s what you breathe in California and not only in the music aspect but in many other areas of entrepreneurship. When I came here I started working with Playing For Change, which is a multimedia music movement and a charitable foundation that builds music schools all over the world. This gave me the opportunity to play with musicians from all over the world and especially to get closer to the music of Congo and Mali, as there is a large African community in Inglewood and Venice.

24/7 VALENCIA: Please tell us something about your favourite guitars: electric, acoustic and Spanish guitars?
Right now the one I play the most is a Ramirez Tablao that I had made just before the pandemic. It’s an old and established make of Spanish guitar and I love the sound of it. For electric guitars, I’ve expanded a lot since I came to Los Angeles: I have a 1964 L-series Stratocaster which is my favourite, also a spectacular 1966 Telecaster and in 2018 I started playing with Collings, which are handmade guitars from Austin, in my opinion the best contemporary American guitars. In Spain I have another Ramirez, a vintage Martin and the Gibson ES 295 which has been with me since the late 90s.

24/7 VALENCIA: What can we expect from your shows in Valencia and Alicante in 2022?
In Valencia, I will play solo. I’ll be playing tunes from the albums made in the Americas at ‘16 Toneladas’, which is like my second home in Valencia. I very recently released Volume 2 of ‘Carreteras Secundarias’…which was recorded in the jungle of Costa Rica.