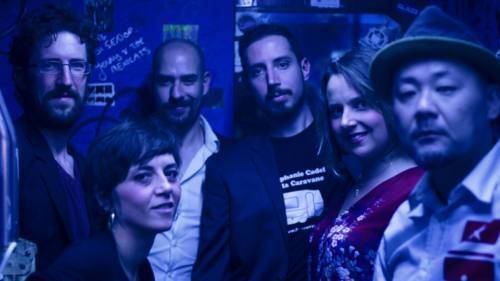 Based in Valencia, Stephanie Cadel is a French born singer-songwriter who, with her cosmopolitan band ‘La Caravane’,  have released albums that fit well with an increasingly diverse city. We met up with her in the bohemian barrio of Ruzafa for this exclusive ‘24/7 Valencia’ interview

24/7 Valencia: Tell us something about your experiences and travels around the world…

Stephanie Cadel: I was fortunate enough to travel to different countries and what was interesting was that I wasn’t just travelling but I actually lived in various places for periods of time. It’s an experience that makes you re-evaluate your life, what you want, what you don’t want and also it gets you out of your comfort zone and open yourself up to new possibilities. For example, it was in Colombia in South America that I played my first concert. I was working in a Centro Cultural de la Cooperacion Española and they proposed to me that I play a few songs with my guitar. I enjoyed it and from then on I started to play more concerts. I started playing little gigs in bars in London in England and later in Valencia, Spain, where i formed my current band ‘La Caravane’. The ironic thing is that we are a group of well-travelled musicians from around the world: Belgium, Japan, El Salvador, France and, of course, Spain!

24/7 Valencia:What are your musical influences?

Stephanie: I would say that my biggest influence is Chanson Française but I also listen to quite a lot of jazz, folk and swing. In ‘La Caravane’ the good thing is that each musician brings his & her own influences and this open fusion creates our own particular sound. We also play around with reggae, bossa nova and sometimes even funk. We also love to try out different sounds in concert and on record. Our music is full of little details like exotic percussion, xylophone, ukulele etc…as well as the instruments that make up the band with flute & sax by Mario Luanco, clarinet by Clareta, piano by Mario Inclan, guitar & vocals by Stephanie, bass by Bert and drums by Kazumi. On the ‘Voyage’ album you can hear backing vocals & violin by Patricia García and guitar & ukelele by Judit Elvira. The album was produced by multi-instrumentalist Antonio J. Iglesias who also added his magical touches to the album.

24/7 Valencia:Tell us a bit about some of your songs on your album, ‘Chanson Du Voyage’.

Stephanie: Elle peint  It was the city of Valencia that was the inspiration for this song. It’s about a girl who paints but paints on walls on the streets, she paints and she goes without knowing of the effect that her work has on people who discover her art while they walk the streets of the city. Valencia is a city full of street paintings, which fires your imagination to keep being inspired by them and escape from the routine of daily life.

De ton corps a mes failles  This song is a homage to the distance between 2 people, to forgetting your other half. But it is also a homage to the meeting again of bodies; it’s the faults in the other person that attract us.

Tes vins  I composed this song for the twentieth birthday of my little sister. 20 (vingt) is pronounced the same as wine (vin) in French! It is a metaphor for her personal growth, maturing, that she gains body & experience, aromas & bouquet…like fine wines. Everything needs time.

La Caravane is simply a song about ourselves. It’s about out musical adventures, our instruments, our sound and what is behind ‘La Caravane’.

24/7 Valencia:What is the difference for you between living in Valencia and living in France?

Stephanie: What has always attracted me to Valencia is the buen vivir (good living) of its people. I love Brittany, which is where I am from but it is here in Valencia that I have found people who want to enjoy life and to be happy. I am not talking about the cliché from abroad of a Spaniard enjoying a siesta and little else…I am talking about a balance of life where you don’t forget the important things, where little pleasures bring you happiness. Valencia is a very enjoyable city to live, a perfect size with a good choice of cultural activities, the sea and the sun and, of course, a laid back way of life.

24/7 Valencia: Can you take us through the songs of your latest mini-album, ‘Chansons trouvées’ ?

Oui Mais is a song that talks about indecision and what you lose if you spend your life thinking about the different paths you could take, without taking any because you can’t decide to make your choices…

Chaque destination is a song that talks about the trips that you take without knowing where they can take you. Travel that changes the way you had thought previously.

En T’attendant talks about the waiting times during trips. Of the emotions of which we are witnesses or that we feel in the moments of separations and reunions.

La Tasse is a song with deeper, darker theme. From the metaphor of the sea and its currents, it brings us closer to the feeling of losing control, or simply getting lost.

On court is a theme that wants to be a warning regarding our rhythm of life, where everything is done in haste and the pleasures of contemplation are forgotten.

Oh Mon Amour says it’s a song of “amour.” A love that tries to go against the tide.

Casalla is the night, alcohol, music, the bohemian life. 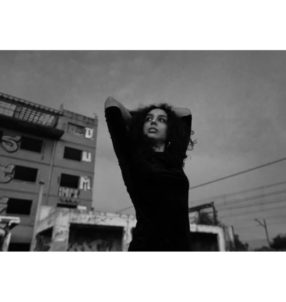