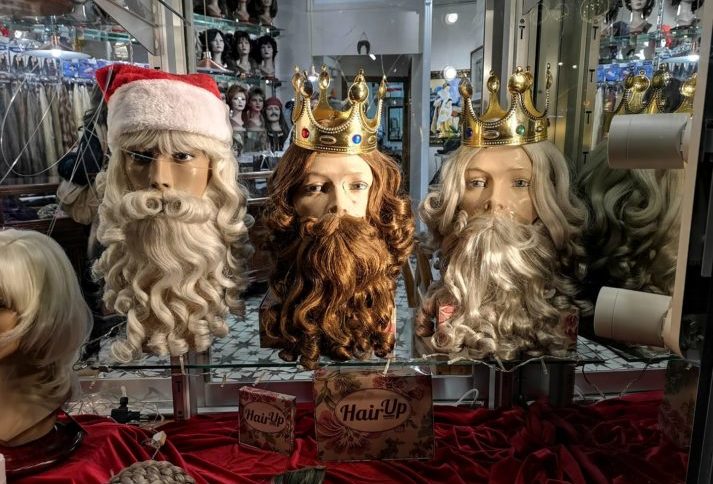 The “Todo a un Euro” shops have been stocking tinsel and blow-up Santas for months. Dean Martin is blasting out of the speakers at ‘El Corte Inglés’. It’s 20 degrees outside. It must be Christmas time in Valencia, a time for peace on Earth, goodwill to all men, ‘Christmas do’ Gin and Tonics, big tellies from ‘Media Markt’ and remembering relatives (and local politicians) who’ve passed away and trying as much as possible to avoid the living ones.

When football teams in Spain have a bad start to the season there is speculation whether the manager will get to “eat his Turrón” at the club or be sacked before New Year. For years, two towns in the community had the Christmas sweet market sewn up. Alicante made “el blando”, a soft dry almondy sweet moulded into a bar, while from Xixona came “el duro”, a hard, dry almondy sweet moulded into a bar. The third option in this grand array of Christmas delights was polvorones, a powdery-dry almond sweet moulded into an oval shape. Polvorones are only eaten at one time of the year. The reason for this will become immediately obvious if you ever try one. When your entire Christmas hamper has long been finished off, that box of polvorones (and there always is one) will still remain.

After centuries of dry almondy sweets, the Valencians finally realised that a bit of variety was needed. Not wishing to surrender sovereign tradition, the solution was to take what at any other time would simply be called “a bar of chocolate”, and rename it turrón just for the Christmas period. Genius!

Nowadays bars of chocolate turrón easily outnumber the traditional stuff on any supermarket shelf. They come in any number of traditional Valencian flavours, such as kiwi fruit, Irish coffee and rum and raisin.

These new innovations haven’t stopped at chocolate. In recent years, Valencian sweet makers have gone all Willy Wonka on us. Amongst the innovations at the Casinos “Turrón and Christmas Sweets Trade Fair’ were Gin and Tonic flavour Turrónes, Turrónes in the shape and colours of the Valencian and Rainbow flags, Whatsapp emoticon Turrónes and last but not least the gloriously un-Christmassy Kebab Turrón, which you can cut as if it were a spit-roasted blob of donner meat. Lovely!

Traditionally, every Spanish home is decorated at this time of the year with a nativity scene complete with models of Mary, Joseph, the baby and perhaps some of the other characters from the Christmas story. Belén building is one Spanish construction industry that is definitely not in desperate decline. There’s a weird attraction towards building mini-worlds and this is a fun form of ecclesiastical lego. Belenes are getting bigger and more spectacular by the year. What started off as adding a lump of moss-covered bark to add a bit of “atmosphere” has got completely out of hand. Just look around the Christmas markets (and of course Todo a un Euro) to see what bits of your Belén are a must this year. Now you can have an entire Little Town of Bethlehem on your dining room table complete with moving parts, villagers and their houses, a lake and a fully functioning Roman era saw mill.

If it’s big you want, the Cathedral takes the lead with a Belén with life-size models of the holy family, while the Basilica de San Vicente Ferrer has a Belén with over 300 figures, which is about the entire estimated population of Bethlehem at the time.

The dutifully sedate, traditional Belén , however, now has to fight for space with the bauble-strewn Northern European Christmas tree, the Mexican poinsettia plant, the holly branches and the plastic Father Christmas climbing up the balcony. In some cases, traditions have merged. Thus you get mutant crib scenes of cattle and shepherds nestling among tinsel, fairy lights and snow. On the other hand, the ‘caganer’ (the figure of a man having a crap which, believe it or not, is traditional in Catalonian crib scenes) is now quite often found squatting behind the Christmas tree (at least, I think that’s what it was I saw).

In Spain, presents are brought by the Three Kings on January 6. You´d think that would be enough – but not for the festively-frenzied Valencians. In the last decade or so, Father Christmas has appeared on the scene. With his white beard and red suit he looks like the “traditional” Coca-Cola version, but for some reason he bears the French name, Papa Noel. Far from having to fight it out with the Kings for his status in the hearts of Spanish children, he´s been neatly incorporated into the whole tradition. Just like George Martin was the fifth Beatle, Father Christmas is a bit like the fourth King. It´s just that he comes a little bit earlier, conveyed by reindeer instead of camels.

The big winners, of course, are the kids. Not only do they get loads of toys at Epiphany, they also get showered with goodies on Christmas day. The Three Kings themselves, Baltazar, Melchior and Gaspar (as they were named about 1000 years after they were supposed to have existed) arrive in Valencia by boat at the Marina Juan Carlos I and finish up at the plaza del Ayuntamiento, where the kings are raised up on a fireman’s ladder and enter the town hall through the balcony.

And how are we going to pay for all this? There’s always the lottery. The buying of Christmas lottery tickets is an obligation here. No Spanish person can say no when offered a ticket…or will take no for an answer when trying to sell you one. This is purely to avoid being that sad person who always appears on TV after the lottery draw; the only one in the block who didn´t buy a share in the winning ticket. They are usually filmed claiming fiercely “I´m happy because I am healthy”. So, this day is called“el día de la salud”.

Wherever you are during the festive season, make sure you enjoy it as enthusiastically as the Valencians do. Happy Christmas.