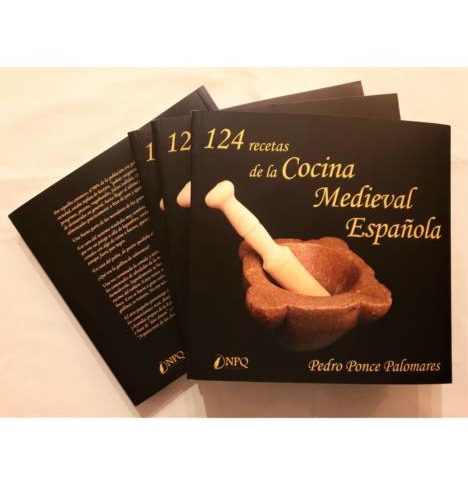 ##If you’re looking for new recipes, Pedro Ponce encourages you to think ‘old’ – way old, as in medieval. You may not have all the ingredients on hand, and you surely won’t know all the cooking processes by heart. However, Pedro provides plenty of pointers and ‘new-to-us’ culinary treasures in his latest cookbook, “124 Recipes of Spanish Medieval Cuisine.” He was delighted to share the backstory with ‘24/7 Valencia.’

24/7 VALENCIA: What inspired you to focus on medieval recipes?

PEDRO PONCE PALOMARES:: Now that Spanish cuisine has reached haute cuisine—a high level with extraordinary worldwide recognition—I decided on medieval cuisine because it represents the origin of Spanish gastronomy. I think it is a good time to emphasize the roots of the legacy that our ancestors left us.

24/7 VALENCIA: Why is it important to recognize the origin of our cuisine?

Just as it is necessary to know about our surname, our family, our region, our country, our language, our culture; it is also important to know our gastronomy that is also part of our culture. This is a way to know what our parents, grandparents and ancestors ate.

24/7 VALENCIA: Where did you find the recipes?

Part of the recipes come from the “Llibre de Sent Soví,” dated 1324, which is surrounded by unknowns regarding origin, authorship, recipe compilation and creation date. The book covers dishes ranging from ancient Greek and Roman cuisine, to Arabic and Sephardic cuisine. It could be said that it is a compilation of recipes that represents the origin of the current Mediterranean Diet, with dishes typical of the regions of the Iberian Peninsula. Other recipes come from “Ruperto de Nola’s Book of Stews,” with its first edition dated 1520. Its repertoire of recipes intersects culinary cultures of Jews, Moors and Christians. Some recipes are contributions from the book of “Sent Soví,” from very old convent recipes or reflections from the accounting booklet of the Monastery of Santa Ana in Barcelona of 1402, which also is clouded in enigmas.

24/7 VALENCIA: How long did your research and writing take?

I dedicated two years of my free time and cooked about 200 medieval recipes, of which I selected 124 for inclusion. Perhaps the most interesting and fun part was the research process, where I resorted to certain historical data published by the doctor in medieval history Elena Piedrafita, who specialized in food from the Middle Ages of the Crown of Aragon. It was a very interesting time, when Jews, Moors and Christians lived together on the Iberian Peninsula. A time full of ups and downs and periods of pressing famines.

24/7 VALENCIA: Have you tried all the recipes?

Each and every one of the recipes I have cooked, tasted, tasted, enjoyed, devoured and photographed; some of them on more than one occasion. A good part involved investigation and interpretation of what the kitchen could have been in the Middle Ages. I say interpretation because the vast majority of recipes of that time come with very few details about quantities of ingredients, cooking times, finishes, spices and herbs used. Sometimes they don’t even clearly define the main ingredient.

24/7 VALENCIA: Which recipes are your favourites?

I like all the selected recipes, but the pickles call my attention, especially the “Pickled for Fried Fish” dish. Some vegetable recipes, such as the “Alboronia” and the “Almodrote of Aubergines” are works of culinary engineering. Something similar happens to me with “Los Galianos,” “Aunt Sofia’s Soups in Egg,” “Cod and Spinach,” “Chicken in Pepitoria,” Morteruelo” and some other desserts.

24/7 VALENCIA: Which recipes surprised you?

The dishes that surprised me the most for their gastronomic richness and architecture are the mixtures of meats with fruits. But without a doubt, the most surprising recipes are the ostentatious recipes of the nobility, whose purpose was to impress, such as “The King’s Egg,” “The Half-Roasted, Half-cooked Cow” and the skinned, cooked and re-dressed birds with their own plumage. Other recipes entertain and play with the guest’s senses by using so many spices, which were extraordinarily expensive at that time. It was said, “You are going to get more garlic than chicken!”

Let yourself be carried away by the new aromas and flavours, balancing the amount of spices, herbs and the acidity of the dishes to the taste of each one, since many of them carry vinegar, acidic juices or unripe grape.Once the smell and taste of these stews become familiar, it is difficult to do without the dressings.

24/7 VALENCIA: You mentioned in your cookbook “Pure Alchemy of Stoves.” What did you mean?

Alchemy is a doctrine, a science, a philosophy, an almost hermetic discipline of the Middle Ages.One of its main objectives is based on incessant research in search of discoveries. It seems that many haute cuisine recipes of that time resulted from a series of tests and cooking experiments with food, herbs, spices and liqueurs.

24/7 VALENCIA: Tell us about your first cookbook.

My earlier book, “The Book of Rice, The Rice in My Memory,” is a monographic about rice in paella, broth, sweet, baked, desserts, stuffed … Different cooked rice with meat, fish, seafood, vegetables, mushrooms, legumes …

24/7 VALENCIA: Are you a professional chef, Pedro?

I have been retired from professional kitchens for a long time. During my young student years, I combined studies with the stove and cauldrons, dedicating myself to cooking as a secondary job, a survival resource to pay for my studies. But this trade still lures me today — a passion difficult to reproduce.

I want to clarify that when selecting most of the foods that appear in my book, I wanted to be respectful of the environment. I substituted for some products and animals that now are protected or branded as despicable, just as our ancestors did with other foods that now have our approval. For the preparation of some dishes, I also took into account the availability of ingredients at our markets. Hence, it will not be possible to find the original recipes, if you look for them with this name, since it has been necessary to change some of the aforementioned foods. Another thoughtful decision was to convey a certain part of the story in a casual way. I think that this will make a very nice book for the reader.

I hope you enjoy this healthy cuisine, based on our gastronomic roots, as well as the old customs that used dressings that have been forgotten in the inertias of today’s cuisine. Cooking the recipes in this book means setting out on a “journey of no return” for smell and taste buds.

24/7 VALENCIA: Where can you buy your cookbook, and what does it cost?

The cookbook, priced at 20€, can be purchased or digitally ordered in bookstores throughout Spain and in Latin America. It can also be obtained by shipment from the NPQ Editor publisher or from Original Paella (https://originalpaella.es/equipamento/libros-paellas-y-arroces/ ). For those living in Valencia who want the book signed and dedicated, contact me at https://www.facebook.com/pedro.poncepalomares or https://www.instagram.com/pedroponcepalomares/?hl=es .

The next time you entertain, entertain Pedro’s ideas for a delightfully delicious medieval meal. Happy cooking, happy dining from ’24/7 Valencia’!